Bell Beaker blogger reports on a paper about a cemetery in Switzerland with remains from 3300 BCE. Early conference presentations about the site suggest that later publications will show that steppe ancestry in what is now Switzerland ca. 3300 BCE, which is before it appeared in what is now Germany, apparently as part of the Corded Ware culture's early expansion. This is one of the cultures that was most definitively Indo-European linguistically. 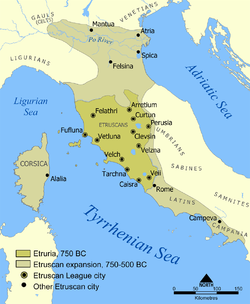 A map showing the extent of Etruria and the Etruscan civilization. The map includes the 12 cities of the Etruscan League and notable cities founded by the Etruscans via Wikipedia at the Etruscan origins link below.


Notably, this pre-dates the arrival of the linguistically non-Indo-European Etruscans in Tuscany, Italy, most likely from an immediately prior point of departure in Switzerland, by about two thousand years. What does this imply about Etruscan origins?

The low frequency of the appropriate subtypes of Y-DNA R1a, and the high frequency of the appropriate subtypes of Y-DNA R1b, in modern populations in the region, according to a 2018 paper, as well as largely local mtDNA in ancient Etruscan DNA suggests that while they may have steppe ancestry, it was probably male dominated and closer to Bell Beaker than Corded Ware in origins, and it suggests that there was not much Corded Ware-Etruscan admixture.

Or, were the pre-Etruscans instead, as some ancient historians have suggested, relatively recent emigrants from Southern France to Switzerland who, in turn, continued their exile to a new homeland on the Italian Peninsula? (Or if not there, perhaps from Central Europe?).

Or, is the hypothesis that the Etruscans reached Italy from an immediately prior point of departure in Switzerland simply wrong, as other hypotheses of Etruscan origins dating back to ancient times suggest? Other ancient DNA evidence seems to support the Swiss route hypothesis.

More details information about the ancient DNA results in a published paper could help clarify the issue.


The abstract of the latest paper and its citation are as follows:

Nowadays, the discovery and excavation of an almost intact Late Neolithic dolmen is rare, as those monuments were often visible in the landscape and have been investigated or destroyed in earlier times; therefore, information about the buried individuals has often been lost. The excavation of the dolmen, a stone grave chamber, from Oberbipp, Switzerland, in 2012 provided a unique opportunity to study human skeletal remains from a Late Neolithic collective burial (3350–2650 BCE). Over 2,000 fragmented and commingled skeletal elements were recovered and form the basis of this morphological study. Established morphological methods were employed to evaluate the minimum number of individuals, age at death, sex, stature, and the presence of pathological alterations and trauma. Sex was determined additionally by aDNA analysis. Elements of the entire human skeleton were recovered indicating a primary burial site. At least 42 individuals (femora) from all age classes (57%:43% adults to subadults) were buried in the dolmen. Based on aDNA analysis (n = 23, partes petrosae) slightly more males than females (44%:35% males to females, 22% indeterminate) were recovered. Stature was estimated from complete femora (n = 3) indicating an average body height between 154–157 cm. Pathological alterations and trauma could be observed on several bones, however, without indications for major interpersonal violence. The caries intensity of Swiss samples seems to be higher compared with other Neolithic European sites. A possible separation of burial areas for males and females based on the recovery of skeletal elements within the dolmen along with aDNA results is postulated. In addition, this article contributes to a better understanding of Late Neolithic populations in Central Europe.

The abstract and citation for the conference paper is as follows:

Major genetic changes in European populations occurred at the beginning as well as final stages of the Neolithic period as shown by recent genetic studies. The transition from hunter-gatherers to agriculturalists and farmers in the 6th millennium BCE coincided with a human migration from the Near East. A second migration into Central Europe occurred originating from the Pontic steppe in the 3rd millennium BCE and was linked to the spread of the Corded Ware Culture which ranged as far southwest as modern-day Western Switzerland. These genetic processes are well studied, for example for the Middle-Elbe-Saale region in Germany, however, little is known from the regions that connect Central and Southern Europe. In this study, we investigate genome-wide data from 97 individuals from the Swiss Plateau, Southern Germany and the Alsace Region in France that span the transition from the Neolithic to the Bronze Age (4500 to 2000 BCE). Our results show a similar genetic process as reported for the Middle-Elbe-Saale region suggesting that the migration from the Pontic steppe reached all the way into the Swiss Plateau. However, our evidence suggests that the onset of that transition may have started even earlier in Switzerland compared to the Middle-Elbe-Saale region. The existence of core families within multiple burials and the determination, quantification and the estimated dates of arrival of different ancestry components in this region were analysed. Our data represent the first comprehensive genome wide dataset from Neolithic individuals from the Swiss Plateau and provide the first insights into the genetic history of this region.

Etruscans got their Steppe admix, Y DNA R1b from Bell Beaker. But their language is from Neolithic Italy.

There is an argument for that. I disagree that Etruscans were genetically identical to Italic speakers. For example, the Etruscans have a fairly narrow pool of common ancestors distinct from other native Italians. More evidence stirring the pot at https://www.pri.org/stories/2016-04-15/where-did-etruscan-people-come-we-still-dont-know-linguistic-and-genetic-clues and http://oro.open.ac.uk/50571/1/08_Perkins%20proofs.pdf and https://www.sciencedirect.com/science/article/pii/S0002929707618941 and https://www.ncbi.nlm.nih.gov/pmc/articles/PMC2189563/ and https://journals.plos.org/plosone/article?id=10.1371/journal.pone.0055519 and https://onlinelibrary.wiley.com/doi/abs/10.1002/ajpa.22319 and https://www.nature.com/articles/ejhg2008224 and https://journals.plos.org/plosone/article?id=10.1371/journal.pone.0105920d

I would say that the linguistic origin is cryptic.

I agree that by the time of Claudio (apologies to the memory of Tiberius Claudius Drusus Nero Germanicus inter alia, worshiped as a god by the native speakers of Colchester here in England), 12 former generations of Roman schoolboys had learnt Etruscan. One of Claudius' wives was Etruscan. He wrote a book on the language and grammar, presumed lost in antiquity, although we live in hope. The first book on English grammar was written in Shakespear's time and it was published in Latin. Admittedly, less than 1% of the population of Latium could afford schooling fees, yet 100% of those persons( Etruscan word)learnt language on their mother's lap. In the " Rape of the Sabines" were the mothers of Roman or Etruscan provenance? In AD 711, 2000 moorish warriors, all male crossed the Straits of Gibraltar. 12 generations later most sultans had blue eyes and blond hair but wrote and spoke Arabic even though their mothers had Phonaecian, Greek origins ...
Forty generations of my own ancestors, at the head of the Loxley valley NW Sheffield never left the area, so it's a disappearing surname now, also for their Brito Celtic mothers surnames. They were the first to make high quality crucible steel, and latterly differentially tempered steel plating for the first Victorian dreadnought (drednowt) battleships. We always thought that the Danes never made it to the head of the valley, yet the Romans did, but retained the names of the Celtic gods, Gwertha and her son Dun.
I would afdd that all origins are cryptic.

The the linguistic origin is not so cryptic. Simply not all populations adopted Indo-European languages despite IE migrations. The Basques are the living proof even today.

Some of the papers you've posted are just inaccurate speculations based on modern samples.

I am aware that some (particularly the Y-DNA one) are based upon modern samples, but that doesn't necessarily make them inaccurate.

The linguistic origins of Basque are not known either and the data can support more than one possible hypothesis. I do not consider the hypothesis that the Bell Beaker people were linguistically IE even to be definitively established. Genes are not language.