The anomalous magnetic moment of the muon is a measurable quantity that can be predicted, in principle, in the Standard Model of Particle Physics. Most parts of the Standard Model calculation are much more precise than any possible experiment, but the portions that involve the strong force of the Standard Model (i.e. the contribution from quantum chromodynamics or QCD), while a small part of the total value account for most of the error in the prediction.

The current experimental value is about 3.5 to 3.7 standard deviations away from the best theoretical estimate at the time it was made, which makes it one of the most important anomalies between Standard Model predictions and experimental observations.

This quantity, since it can be measured and calculated theoretically extremely precisely, and has some contributions from essentially all parts of the Standard Model, is a good global measure of the magnitude of the extent to which beyond the Standard Model physics are not properly captured by the Standard Model over a quite broad range of energy scales.

On one hand, the existing anomaly relative to estimate margins of error in the calculations and measurement, tentatively points to some deviation from the Standard Model, and on the other, the very small deviation on a percentage basis between the predicted value and the measured value (about 2 parts per million), suggests that any deviation from the Standard Model isn't a huge one with much observable impact.

The experimental number will receive a more precise update within one to two years from now from the Fermilab E989 experiment. Data has been collected in that experiment since 2018 and the precision of the measurement at the experiment should rival the previous one early this year, with an eventual precision four times that of the previous measurement. A final result was anticipated in 2020 as of January of 2017, but like all major government projects, it is somewhat behind schedule. As of May of 2019, data collection was expected to continue through 2019-2020, with a result announced sometime in late 2020 or in 2021. The J-PARC (E34) experiment is also measuring muon g-2 at greater precision experimentally in a method with different kinds of systemic error, but it probably at least two years behind E989 in producing a publishable measurement. 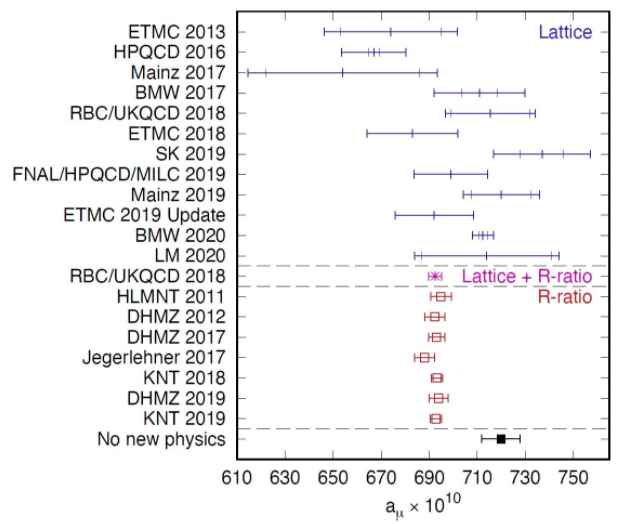 Many Lattice QCD based estimates from the last few years (including this one from late February of 2020) are consistent with the state of the art experimental measurement, suggestion that the tension is mostly due to an inaccurate theoretical prediction. But, many estimates using a different technique called an R-ratio, independent of, or in conjunction with Lattice QCD methods (including this one from March 2020), can only be reconciled with experiment if the new state of the art measurement is significantly lower than the last one. Lots of background can be found in this power point presentation from March 2018. The R-ratio seems to be "the ratio of the bare cross section for e +e − annihilation into hadrons to the pointlike muon-pair cross section at center-of-mass energy √ s."

Conventional wisdom is that the theoretical calculation and experimental result will converge with greater precision in each.
Posted 10:55 AM
Email ThisBlogThis!Share to TwitterShare to FacebookShare to Pinterest
Labels: experimental BSM data, physics, QCD, Standard Model physics