There are some people who argue, without much reliable evidentiary support, that ancient Egyptians were strongly phenotypically, ancestrally and culturally aligned with sub-Saharan Africans. And, it is true that modern day Egyptians have significant sub-Saharan African ancestry.

But, ancient DNA, for example, in this paper from about three years ago, demonstrates that the sub-Saharan ancestry in modern Egyptians mostly arrived in the last 1600 years or so, after the fall of the Roman Empire. Before that, Egyptians were more Near Eastern than they already predominantly are today.

Egypt, located on the isthmus of Africa, is an ideal region to study historical population dynamics due to its geographic location and documented interactions with ancient civilizations in Africa, Asia and Europe. Particularly, in the first millennium BCE Egypt endured foreign domination leading to growing numbers of foreigners living within its borders possibly contributing genetically to the local population. Here we present 90 mitochondrial genomes as well as genome-wide data sets from three individuals obtained from Egyptian mummies. The samples recovered from Middle Egypt span around 1,300 years of ancient Egyptian history from the New Kingdom to the Roman Period.

Our analyses reveal that ancient Egyptians shared more ancestry with Near Easterners than present-day Egyptians, who received additional sub-Saharan admixture in more recent times. This analysis establishes ancient Egyptian mummies as a genetic source to study ancient human history and offers the perspective of deciphering Egypt’s past at a genome-wide level.

The introduction notes that:

[W]e aim to study changes and continuities in the genetic makeup of the ancient inhabitants of the Abusir el-Meleq community, since all sampled remains derive from this community in Middle Egypt and have been radiocarbon dated to the late New Kingdom to the Roman Period (cal. 1388BCE–426CE). In particular, we seek to determine if the inhabitants of this settlement were affected at the genetic level by foreign conquest and domination, especially during the Ptolemaic (332–30BCE) and Roman (30BCE–395CE) Periods.

The site is in the fertile portion of the Nile basin about seventy miles south of Cairo. All of the samples come from mummies, so the sample is biased towards the more affluent, but not necessarily royalty either. 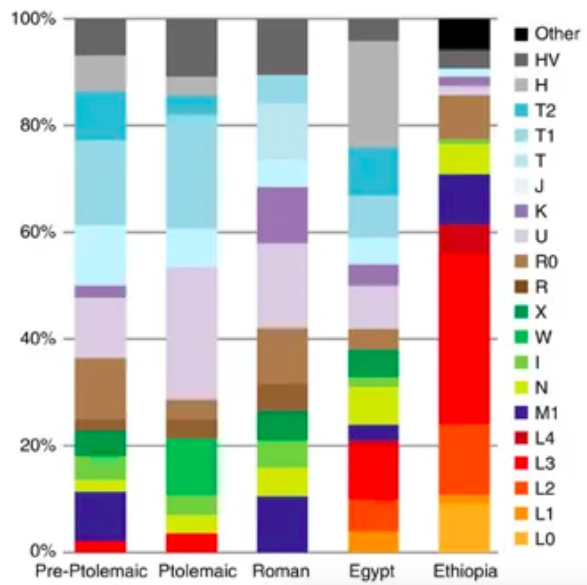 To test for genetic differentiation and homogeneity we compared haplogroup composition, calculated FST-statistics and applied a test for population continuity on mitochondrial genome data from the three ancient and two modern-day populations from Egypt and Ethiopia, published by Pagani and colleagues, including 100 modern Egyptian and 125 modern Ethiopian samples. We furthermore included data from the El-Hayez oasis published by Kujanová and colleagues.

We observe highly similar haplogroup profiles between the three ancient groups, supported by low FST values (<0.05) and P values >0.1 for the continuity test. Modern Egyptians share this profile but in addition show a marked increase of African mtDNA lineages L0–L4 up to 20% (consistent with nuclear estimates of 80% non-African ancestry reported in Pagani et al.). Genetic continuity between ancient and modern Egyptians cannot be ruled out by our formal test despite this sub-Saharan African influx, while continuity with modern Ethiopians, who carry >60% African L lineages, is not supported. To further test genetic affinities and shared ancestry with modern-day African and West Eurasian populations we performed a principal component analysis (PCA) based on haplogroup frequencies and Multidimensional Scaling of pairwise genetic distances. We find that all three ancient Egyptian groups cluster together, supporting genetic continuity across our 1,300-year transect. Both analyses reveal higher affinities with modern populations from the Near East and the Levant compared to modern Egyptians.

The affinity to the Middle East finds further support by the Y-chromosome haplogroups of the three individuals for which genome-wide data was obtained, two of which could be assigned to the Middle-Eastern haplogroup J, and one to haplogroup E1b1b1 common in North Africa. However, comparative data from a contemporary population under Roman rule in Asia Minor, from the Roman city Ağlasun today in Turkey, did not reveal a closer relationship to the ancient Egyptians from the Roman period.

An examination of the three whole genomes retrieved showed that modern populations are shifted towards sub-Saharan Africa relative to the ancient individuals by about eight percentage points.

Absolute estimates of African ancestry using these two methods in the three ancient individuals range from 6 to 15%, and in the modern samples from 14 to 21% depending on method and choice of reference populations. We then used ALDER to estimate the time of a putative pulse-like admixture event, which was estimated to have occurred 24 generations ago (700 years ago), consistent with previous results from Henn and colleagues. While this result by itself does not exclude the possibility of much older and continuous gene flow from African sources, the substantially lower African component in our ∼2,000-year-old ancient samples suggests that African gene flow in modern Egyptians occurred indeed predominantly within the last 2,000 years.

In other words, the genetic results are consistent with significant wave of sub-Saharan migration in the medieval era, ca. 1300 CE, when Africa was part of the Islamic empire.


Historically, this is a not implausible hypothesis. This hypothetical date of mass migration from sub-Saharan Africa inferred genetically coincides with the establishment of Egypt's Mamluk ruling class made Egypt the hub of a geographically vast empire. This empire had an intense need to import labor in the wake of mass casualties from the Black Plague around 1350 CE. There is really no time before then, or after then, when it is plausible for there have been this influx of people into Egypt from sub-Saharan Africa.

A Muslim Arab Army sent by the second caliph, Umar, invaded Egypt in 639 CE and after military tussles back and forth with the Byzantine empire that was in place before their invasion, the Islamic forces had secured Egypt by 646 CE, repelling a naval invasion attempt by the Byzantines seeking to retake control of Egypt in 654 CE. The Islamic empire was also initially limited to North Africa, although it later expanded south, further into Africa.

Wikipedia explains what happened next (through the end of the 18th century):

When they defeated the Byzantine armies in Egypt, the Arabs brought Sunni Islam to the country. Early in this period, Egyptians began to blend their new faith with indigenous beliefs and practices, leading to various Sufi orders that have flourished to this day. These earlier rites had survived the period of Coptic Christianity.

The Arabs founded the capital of Egypt called Fustat, which was later burned down during the Crusades. Cairo was later built in the year 986 to grow to become the largest and richest city in the Arab Empire, and one of the biggest and richest in the world.

The Abbasid period was marked by new taxations, and the Copts revolted again in the fourth year of Abbasid rule. At the beginning of the 9th century the practice of ruling Egypt through a governor was resumed under Abdallah ibn Tahir, who decided to reside at Baghdad, sending a deputy to Egypt to govern for him. In 828 another Egyptian revolt broke out, and in 831 the Copts joined with native Muslims against the government.

Eventually the power loss of the Abbasids in Baghdad allowed general upon general to take over as ruler of Egypt, yet while being under Abbasid allegiance, the Ikhshids and the Tulunids dynasties were among the most successful to defy the Abbasid Caliph.

The Fatimid Caliphate and the Mamluks

Muslim rulers nominated by the Caliphate remained in control of Egypt for the next six centuries, with Cairo as the seat of the Fatimid Caliphate.

With the end of the Kurdish Ayyubid dynasty, the Mamluks, a Turco-Circassian military caste, took control about 1250. By the late 13th century, Egypt linked the Red Sea, India, Malaya, and East Indies. The mid-14th-century Black Death killed about 40% of the country's population.

Egypt was conquered by the Ottoman Turks in 1517, after which it became a province of the Ottoman Empire. The defensive militarisation damaged its civil society and economic institutions. The weakening of the economic system combined with the effects of plague left Egypt vulnerable to foreign invasion. Portuguese traders took over their trade. Between 1687 and 1731, Egypt experienced six famines. The 1784 famine cost it roughly one-sixth of its population. Egypt was always a difficult province for the Ottoman Sultans to control, due in part to the continuing power and influence of the Mamluks, the Egyptian military caste who had ruled the country for centuries.

Egypt remained semi-autonomous under the Mamluks until it was invaded by the French forces of Napoleon Bonaparte in 1798. Napoleon defeated the Mamluk troops in the Battle of the Pyramids, 21 July 1798. After the French were defeated by the British, a power vacuum was created in Egypt, and a three-way power struggle ensued between the Ottoman Turks, Egyptian Mamluks who had ruled Egypt for centuries, and Albanian mercenaries in the service of the Ottomans.

OT: I didn't know where to put this:
https://m.phys.org/news/2020-03-stone-age-eggshell-beads-exchanged-years.html

> Sorry, but words don't derive from networks, only from other words.
> (Or morphemes.) [PTD]

Replace 'from' with 'via'. Note that !hxaro (modern Ju Hoansi/Khoisan) is derived from Xyuambuatl, referring to a round/ovoid eggshell as well as a dome shelter, both were portable chambers which were tilted (shifted) for pouring/filling = exiting/entering. [DD]