A Tocharian Love Poem From 600 CE 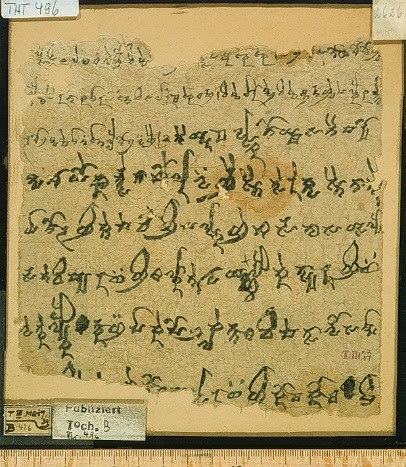 I thus announce, heretofore there was no human being dearer to me than you; likewise hereafter there will be no one dearer to you than me.

Your love, your affection, my jubilant song rises up!

Along with life itself, this should not come to an end for my whole life.

I was thinking: "I will live with one love well for the whole of my life, without any deceit, without…"

The God of Karma alone recognized this, my thought. Thus he provoked a quarrel; it ripped out my heart that belonged to you. It led you afar, it tore me apart, it turned me into a partaker of all sorrows; he took away the consolation I had in thee.

From here.  The ellipsis reflect gaps in the fragmentary manuscript (an image of which is above) that can't be inferred from the remaining portions of the text.


The original was written in the dead Tocharian language, a branch of the Indo-European language family which was the language of the people of the Tarim Basin in what is now Inner Mongolia, China, in 600 CE, by the ancestrally West Eurasian people who lived there from about 2000 BCE until about 600 CE. It was written shortly before that language and culture died and was succeeded by the ethnogenesis of the Uyghur people (who are genetically a roughly even mix between West Eurasian and East Eurasian ancestors).

While a script brought by Buddhists to whose religion the people of the Tarim Basin had converted is used, the character of the poem bears no similarity to other Buddhist or South Asian poetry and appears to reflect the character of the Tocharian culture.
Posted 11:21 PM
Email ThisBlogThis!Share to TwitterShare to FacebookShare to Pinterest
Labels: China, culture, language

You have gone silent awhile, I hope due to vacation.

Well, not exactly. There is no rest for the wicked. And, I have kept up bookmarking papers and articles to blog about even though I had not time to actually post about them.

But I have been slowed down by an interaction of work demands and the new complexities of working from home during lockdown with both kids back from college and doing online instruction and my wife replacing marathon training with in home exercise regimes and very intense efforts to keep our home coronavirus free as a refrigerator and dryer are both failing. Coordinating the logistics of getting two kids home from school and set up for online education has been tricky (as has negotiating issues like what the kids are allowed to do, my son's girlfriend has been deemed an honorary household member, but not more casual friends), and cancelling graduation and summer plans.

Three of the six people who work in converted mansion where I have my office have contracted coronavirus, with two hospitalized, and there is one more possible mild symptom case of a colleague who recovered quickly. I was spared, as was on of my six colleagues in the office, but that means carrying multiple other people's work load on top of my own to cover for people while they are sick, and doing it in a new and different way that is less efficient as I first learn how to do it (e.g. I've had to learn how to do online backing since my bank has closed all of its branches except one which is only open a few days a week and had to figure out how to delegate work to a recovering assistant who is in isolation). One of the six has had to quit indefinitely.

Daily cores have also become much tricker and time consuming. For example, my daughter sewed me masks that I'm required to wear outside now. Groceries are now wiped down with bleach after I get back from the store to score the only Tofu or toilet paper or Clorox wipes or ramen or flour that I can find in multiple trips.

I've also been distracted by the attention grabbers of the COVID-19 situation, the evolving Presidential race in the U.S., and a weight loss program called Noom.com. I am down 20 pounds since the lockdown (which I had gained back after losing it over the last year) and 53 pounds since my peak weight on April 2, 2018.

The other sad news (but really petty given all the other drama) is that my beloved five year old laptop had been randomly crashing with increasing frequency. Last weekend I took it into the shop and it received a basically terminal diagnosis. This become especially apparent when I upgraded to Catalina about a month ago, which pushed the machine to its limits more, although I've already been pressing those limits with the demands of dealing with an increasingly large volume of lawsuit evidence in the form of photos and videos, and shadowing parts of large cloud based databases that I use in my practice. There are apparently some serious flaws in the logic board of my laptop (which currently had a trade in value of only about $240 without that problem), that would cost almost as much as a new computer to fix. So, I'd have to replace the logic board entirely to fix it, and there might be another similar flaw in the RAM which might also have to be replaced if the problem wasn't solved with the logic board replacement alone.

I was completely dead in the water from work and blogging for a while while my computer was in the shop being diagnosed, and impaired before then by daily losing perhaps 10-30 minutes of work each time, and having my work flow interrupted by crashes. I have had to bite the bullet and order a new one. The new one, of course, will be stunningly more capable than my old one with faster processors, more RAM, more storage, faster Wi-Fi connections, faster graphics processing, etc., while only marginally heavier (I bought a similarly powerful one a couple of years ago but only have my assistant use it because it is so heavy to carry back and forth from home to work to meetings to court). But, it is not cheap since I need, for example, 1 TB of SSD memory for some of the things I do with it for work, while also controlling weight since a heavy computer aggravates a back injury I suffered while trying to saving money by not hiring a piano mover a number of years ago.

As the drama calms down, I expect to return to more regular blogging.

I know you and the other people who read this blog don't really need that kind of justification and accounting, but it is nice to vent once and a while.

I'm reminded of the Chinese proverbial curse 'May you live in interesting times'.

Maintain sanity & sanitize all else. We shall prevail eventually, probably...