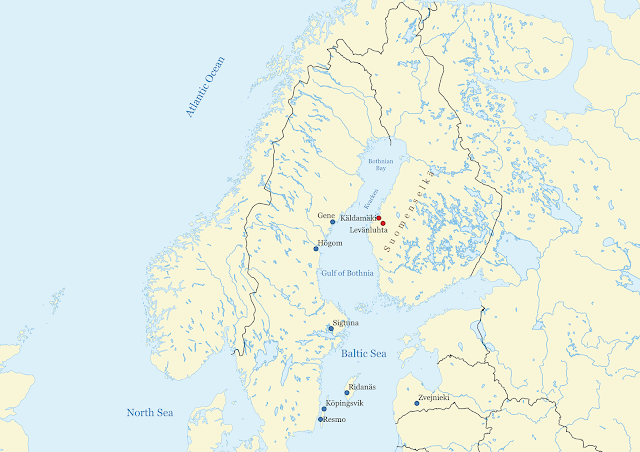 Almost every society has a layer of "legendary history" in which the line between fact and fiction is blurred with stories that are on their face impossible in some respect have kernels of reality that undergird them. The Finnish people are not an exception to this rule.

Recent archaeological work and chemical analysis reveals a time period following a major volcanic eruption that corresponds to "Fimbulwinter," a legendary period with three successive winters (a legend that was probably also an inspiration for the modern fantasy "Game of Thrones" world) and a location the corresponds to the sacred spring containing lakes of Sami legends. Wikipedia explains the legend as follows:

Fimbulwinter is the harsh winter that precedes the end of the world and puts an end to all life on Earth. Fimbulwinter is three successive winters, when snow comes in from all directions, without any intervening summer. Then, there will be innumerable wars.

The event is described primarily in the Poetic Edda. In the poem Vafþrúðnismál, Odin poses the question to Vafþrúðnir as to who of mankind will survive the Fimbulwinter. Vafþrúðnir responds that Líf and Lífþrasir will survive and that they will live in the forest of Hoddmímis holt.

The mythology might be related to the extreme weather events of 535–536, which resulted in a notable drop in temperature across northern Europe. There have also been several popular ideas about whether the particular piece of mythology has a connection to the climate change that occurred in the Nordic countries at the end of the Nordic Bronze Age from about 650 BC. Before that climate change, the Nordic countries were considerably warmer.

It also bears noting that plagues and famines and major political upheavals and wars often coincide with climate events, with this case again proving that rule.

On a more personal note, the site discussed is quite close to my mother's family's ancestral homeland in Finland.

In the middle of the Levänluhta era, the most severe climate disaster in 2,000 years took place. In the 540s volcanic eruptions initiated a cold and dark period lasting several years, possibly reflected in folktales across the northern hemisphere. Recently the researchers working in the project headed by Oinonen have found a link between the disaster and a reduction in the quantity of light observed in the carbon isotopes found in the annual growth rings of trees in Lapland between 541 and 544.

"If you want to date Fimbulwinter, the three successive winters mentioned in Scandinavian sagas, this is the best candidate," Oinonen considers.

Fimbulwinter has been said to have caused a collapse in farming in the areas surrounding Sweden and Estonia. However, the ratio of food from terrestrial sources consumed by the Levänluhta population does not decrease after this period. Instead, the group relying heavily on marine food starts to fade out. The largest group of people continued to supplement their diet with marine food, actually increasing its presence in the human remains buried in the middle of the 7th century. Protein-rich food indicates produce derived from animals, and it appears that, instead of farming, most of the population probably based their sustenance on animal husbandry and hunting. In fact, fur trade has traditionally been thought as the source of wealth during the Iron Age in these southern roots of the Suomenselkä water divide.

Prior genetic research and place name data indicate a connection between the Levänluhta population and the Sámi. Signs of the diverse livelihoods of Iron Age Sámi have also been previously observed in Sweden on the same latitudes. Indeed, the researchers are considering whether the lake burial site of Levänluhta could be a manifestation of sáivas, the sacred spring-containing lakes in the Sámi mythology.

From here, based upon the following paper:

Levänluhta is a unique archaeological site with the remains of nearly a hundred Iron Age individuals found from a water burial in Ostrobothnia, Finland. The strongest climatic downturn of the Common Era, resembling the great Fimbulvinter in Norse mythology, hit these people during the 6th century AD.

This study establishes chronological, dietary, and livelihood synthesis on this population based on stable carbon and nitrogen isotopic and radiocarbon analyses on human remains, supported by multidisciplinary evidence. Extraordinarily broad stable isotopic distribution is observed, indicating three subgroups with distinct dietary habits spanning four centuries. This emphasizes the versatile livelihoods practiced at this boundary of marine, freshwater, and terrestrial ecosystems.

While the impact of the prolonged cold darkness of the 6th century was devastating for European communities relying on cultivation, the broad range of livelihoods provided resilience for the Levänluhta people to overcome the abrupt climatic decline.

The introduction of the paper (citations omitted) provides helpful context:


Mediterranean historical sources identify a mystery cloud obstructing the Sun at AD 536/537. The year without the Sun is observed in tree rings as a negative growth anomaly throughout the Northern Hemisphere (NH). An even larger tree-growth decline is observed during the AD 540s, and discussion of the anomaly has evolved from a single mystery cloud to a decade-scale climatic catastrophe as a result of multiple volcanic eruptions of AD 536–550. The anomalous years probably triggered a longer climatic disturbance lasting until AD 570, or even beyond, known as the “Late Antique Little Ice Age” (henceforth LALIA). This cold and dark period—further stressed by the breakout of the Justinian Plague in AD 542—coincided with the rise and fall of empires, human migrations, and political upheavals.

The volcanic winter of the AD 540s, recently linked to the Ilopango eruption in El Salvador, featured a drastic reduction of solar irradiance for several years in AD 541–544. This was observed in Northern Finland, reducing the temperature and photosynthetic rate, and thus primary production. The severe effects of distant volcanic eruptions on agricultural communities across the NH have been recently demonstrated—crop losses and famines in 17th century AD Finland have been shown to have resulted from tropical volcanic eruptions. As the AD 536–550 climatic catastrophe was the most severe in the last 2500 years, one can hypothesize that its consequences for communities relying on cultivation were even more catastrophic. Indeed, the abandonment of Iron Age settlements in Scandinavia and Estonia after AD 550 may have been a result of the climatic downturn and cultivational challenges.

This work studies the dietary habits and livelihoods of a population that experienced the AD 536–550 climatic downturn in Southern Ostrobothnia, Finland. Early scholars only fragmentarily tell of the people of the North, and these frontiers of ancient civilizations have remained a kind of an unknown otherworld, associated with mystical elements of the seasonal change from long darkness to midnight sun. However, already paralleling the early civilizations of the Mediterranean, the Northerners were involved in cultural connections and trading networks across the Europe, linking them to the world system. In the Southern Ostrobothnian inland, nearly a hundred Iron Age (ca. AD 300–800) individuals were buried in water in Levänluhta. The site, presently consisting of three springs releasing red iron-containing water, has been one of the most intriguing archaeological mysteries within Finland. The lives of these people coincided with the greatest global-scale changes of the Common Era: a land uplift of one meter per century and an abrupt period without the Sun. Using dietary stable isotope studies combined with chronological analyses on human bone collagen samples, it is possible to understand the factors that allowed the Iron Age populations at the northern edge of European civilization to carry themselves through these challenges. A synthesis of this watery burial of worldwide uniqueness is established by tying the existing multidisciplinary knowledge together.

Another analysis of the same event can be found here.
Posted 1:14 AM
Email ThisBlogThis!Share to TwitterShare to FacebookShare to Pinterest
Labels: climate, culture, Europe, Finland, history, personal reflections

Fimbulwinter is a Norse myth, nothing to do with Finnish mythology. I think the author of the article in your last link has in mind the myth of the stealing of the Sun, the Moon and fire by Louhi found in the Kalevala when he mentions the Kalevala. Yes, that myth can also be connected to the Late Antique Little Ice Age, but it has no discernible relationship to the Fimbulwinter myth, the two myths do not seem to share a common source or to have affected each other, they are so different. And in the Kalevala and Finnish mythology there is no other myth that even remotely resembles the Fimbulwinter myth.

The authors here are indeed talking about the possible origin of the Fimbulwinter myth, this cooling event must have affected areas outside the Norse-inhabited territory so it would be visible in the Levanluhta region. During this era these latitudes in Finland as well as in Scandinavia were populated by the Sámi (whose ancient mythology was never put in written record) and the Norse, not Finns. Kalevala sun-stealing myth has been often connected to another event altogether, the Kaali meteorite in Estonia.
https://en.wikipedia.org/wiki/Kaali_crater

But it is widely thought that Finnic (as opposed to Sami) was already spoken in what is now southern Finland by the beginning of the 1st millennium AD, if not earlier.

Perhaps they had cooling-related myth or multiple myths more directly related to the event here, but it did not survive and make it into written record, as Saami and Baltic myths of the time didn't. Prose Edda itself isn't a totally comprehensive or accurate collection of Norse mythology, and Kalevala as a 19th century compilation should be viewed as much more fragmented and distorted.

Yes, the Kalevala is a too late compilation unfortunately. As for the sources of the myths we discuss here and whether we can connect them to specific natural disasters, they are open questions, but worth tackling nevertheless.