One of the most important discrepancies between theory and experiment in the Standard Model is the muon g-2 anomaly, a roughly 3 sigma tension. The last precision measurement of muon g-2 was done by the E821 Muon g-2 Experiment at Brookhaven National Laboratory which finished collecting data in 2001 and issued its final report analyzing that data in 2006.
Two more experiments are underway to make a new more precise measurement. The first to produce results will be the E989 Muon g-2 Experiment at Fermilab which is projected to obtain ∼20 times more data and a ∼3-fold reduction of systematic errors compared to E821. The relative error in the new measurement of muon g-2 at E989 will be about 150 parts per billion and will make the experimental error smaller than the uncertainty in theoretical prediction.
Like all major government projects, it is behind schedule. But a Conference paper released today at arXiv discussing the technical details of one part of the E989 experimental setup also included a hint about how far along E989 is on data collection and when the first results will be announced. According to this paper:

The Muon g-2 Experiment (E989) at Fermilab has a goal of measuring the muon anomaly (a(μ)) with unprecedented precision . . . the experiment has recently commenced Run-3, and the release of Run-1 physics results is planned for 2020.

So, the nearly two decades long wait for new experimental data related to this issue is almost over. Another experiment (the J-PARC E34 experiment see also here) measuring Muon g-2 will be releasing its new measurement result a year or two or so after the E989 results are released, providing a quick replication or non-replication of whatever measurement emerges from the E989 experiment.

More background is available in a June 11, 2020 post at this blog. In a real nutshell, the theoretical side is summed up in this chart from a Fermilab website article: 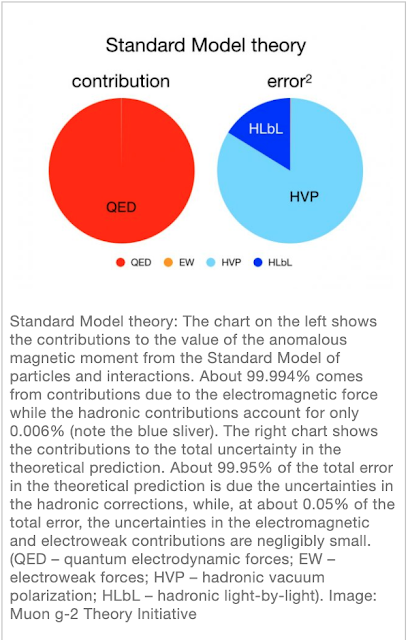 The theoretical value of the anomalous magnetic moment of the muon is:

The most precise experimental result available so far is:

The experimental value exceeds the theoretical value by:

This discrepancy is about 2 parts per million, which is a 3.7 sigma tension.
If the experimental measurement from E989 is 1.6 parts per million lower than it was in the E821 experiment, the new measurement would be considered to be "consistent" with the theoretical prediction.
The muon g-2 measurement is of great interest to scientists because almost all components of the Standard Model contribute to it to some extent.
If the new measurement is consistent with the theoretical prediction, this would be strong evidence that the Standard Model is globally consistent with reality at the electroweak scale plus or minus several orders of magnitude, and that the Standard Model is a complete low energy effective description of the laws of Nature (although, it is not inconceivable that there could be more than one kind of beyond the Standard Model physics and that these new physics contributions offset each other in their contribution to muon g-2). In the event that the results were consistent, the discrepancy would be less than or equal to:
93 x 10-11
On the other hand, if the discrepancy between theory and prediction increased to 5 sigma, this would be considered a scientific discovery of unknown new physics at the same energy scale, but an incomplete one, because the discrepancy tells us only the magnitude of the undiscovered new physics and not its source. A 5 sigma discrepancy would be equal to or more than:
233 x 10-11
For discrepancies between those values, we would be left in more or less the same place where we are now, with a tension between theory and experiment, but not a big enough tension to constitute a definitive scientific discovery of new physics.
But, the reduced magnitude of the absolute size of the discrepancy between theory and experiment in a significantly more accurate measurement of muon g-2 would still probably tend to favor the conventional wisdom that the muon g-2 anomaly is due to some combination of theoretical and experimental error, and not due to new physics.
Posted 11:36 AM
Email ThisBlogThis!Share to TwitterShare to FacebookShare to Pinterest
Labels: experimental BSM data, physics, Standard Model physics

The QCD axion remains experimentally viable in the mass range of O(10 MeV) if (i) it couples predominantly to the first generation of SM fermions; (ii) it decays to e+e− with a short lifetime τa≲4×10−14s; and (iii) it has suppressed isovector couplings, i.e., if it is piophobic. Interestingly, these are precisely the properties required to explain recently observed anomalies in nuclear de-excitations, to wit: the e+e− emission spectra of isoscalar magnetic transitions of 8Be and 4He nuclei showed a "bump-like" feature peaked at me+e−∼17 MeV. In this article, we argue that on-shell emission of the QCD axion (with the aforementioned properties) provides an extremely well-motivated, compatible explanation for the observed excesses in these nuclear de-excitations. The absence of anomalous features in other measured transitions is also naturally explained: piophobic axion emission is strongly suppressed in isovector magnetic transitions, and forbidden in electric transitions. This QCD axion hypothesis is further corroborated by an independent observation: a 2−3σ deviation in the measurement of Γ(π0→e+e−) from the theoretical expectation in the SM. This article also includes detailed estimations of various axionic signatures in rare light meson decays, which take into account contributions from low-lying QCD resonance exchange, and, in the case of rare Kaon decays, the possible effective implementations of ΔS=1 octet-enhancement in chiral perturbation theory. These inherent uncertainties of the effective description of the strong interactions at low energies result in large variations in the predictions for hadronic signals of the QCD axion; in spite of this, the estimated range for rare meson decay rates obtained here can be probed in the near future in η/η′ and Kaon factories.