Inbreeding Declined In West And Central Eurasia During The Holocene Era

Extreme consanguineous matings did occur among agriculturalists but were rare, while inbreeding was more common in hunter-gatherers and declined more gradually as farming societies grow more complex. Modern Europe, which has far more people, has even less inbreeding. 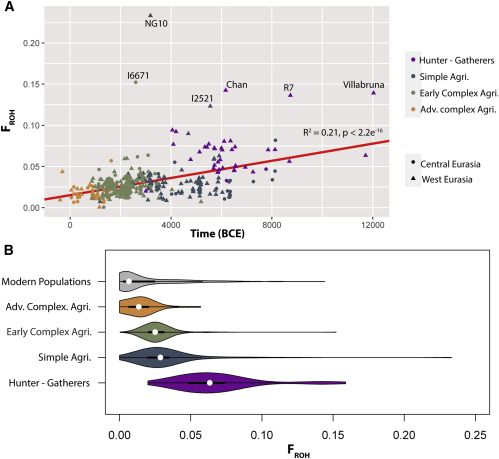 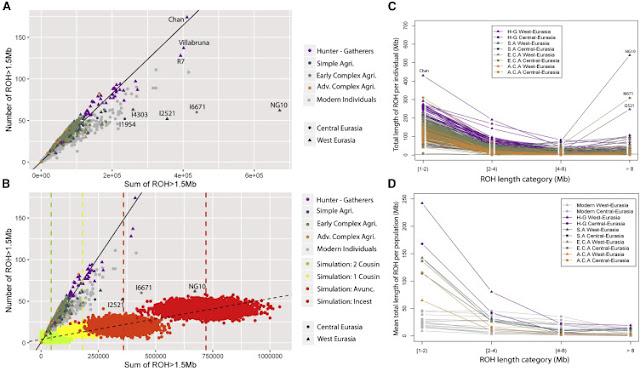 Samples from modern groups like the Balochi, the Bedouin, or the Sindhi from Pakistan have the highest proportions of individuals with FROH > 0.0391 (50%, 41.3%, and 33.3% respectively).

Prevalence Of Highly Inbred Mating
10% of hunter-gathers, 1.9% of simple agriculturalists and modern Central Eurasians, 0.4% of farmers in early complex agriculture, and 0% of farmers in advanced complex agriculture and modern Europeans has an inbreeding coefficient of 0.0932.
This is a level of inbreeding in excess of otherwise unrelated double cousin marriages, and similar to that of marriages between an uncle or aunt and that person's niece or nephew, between half-siblings, between a grandparent and a grandchild, or offspring of closer matings.
Even remote cousin over many generations in a small community, however, can elevate the inbreeding coefficient of mere cousin marriages or of a double cousin marriage, above this threshold. The genetic evidence indicates that this sort of genetic drift was involved in the early hunter-gatherer communities, while cousin and/or closer marriage was a major factor in other genomes studied. 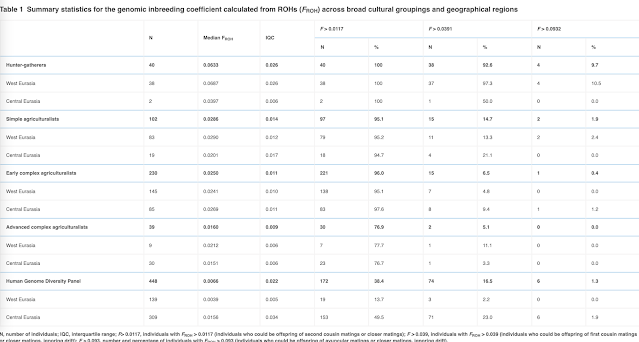 The high inbreeding coefficients in modern "Central Asians" are largely a product of Islamic law's acceptance of cousin marriage and of traditional cultures in some (but not all) Islamic societies, that favor high rates of cousin marriage of 10% to more than 50%, as shown on the map below.
Cousin marriage is uncommon, however, despite being at least nominally legal under Islamic law, in countries that are predominantly Muslim where Muslims predominantly follow the school of Sunni Islamic jurisprudence that is predominant in Southeast Asia (i.e. the Shafi'i school of Sunni Islamic law). 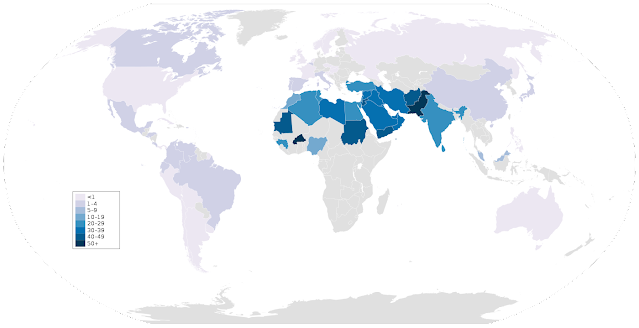 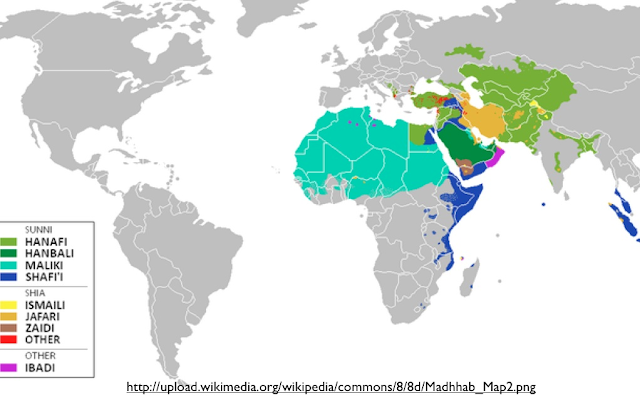 Some concluding comments of the paper bear repeating in their entirety so as not to lose the nuance of these important caveats to its findings:

One is the seeming contrast between the high levels of drift-driven autozygosity (panmictic inbreeding) we report for ancient hunter-gatherer societies and ethnographic studies showing low levels of inbreeding among modern-day hunter-gatherers. For instance, a comparison of inbreeding patterns in a worldwide sample of contemporary hunter-gatherers with Amazonian horticulturalists reported lower inbreeding in hunter-gatherer groups. Hill and colleagues also report low levels of relatedness within modern-day hunter-gatherer bands. However, the mentioned ethnographic findings rely on genealogies and report the prevalence of inbreeding by consanguinity, not inbreeding by drift. In fact, we also find consanguinity to be rare among early Holocene Eurasian hunter-gatherers relative to agriculturalists, consistent with widespread exogamy in modern-day hunter-gatherers. This raises the possibility that reciprocal exogamy and consanguinity avoidance traditions may have been predominant among human foragers since prehistory (but possibly not in archaic hominins).
Second, our results lend support, albeit with limited data, to the hypothesis that extreme consanguinity may have become more common with farming. This result parallels higher within-group marriages among modern-day horticulturalists than foragers. It is also consistent with singular reports on ancient agriculturalist genomes, such as evidence for consanguinity identified in an early Neolithic farmer from Iran, a first-degree incest case from Neolithic Ireland, as well as a recent report on close-kin unions in the central Andes after 1000 CE.
In our analysis, among the seven individuals with the highest level of inbreeding (with FROH > 0.125), all four hunter-gatherers appear autozygous by drift, while all three agriculturalists appear autozygous by consanguinity. This appears unlikely to happen by chance (Fisher’s exact test, two-sided p = 0.029). These results are consistent with the view that consanguineous traditions could have thrived in class-based agricultural societies with private property more readily than in more egalitarian hunter-gatherer groups.
Finally, we report higher consanguinity in Central versus West Eurasia in contemporary societies, in parallel with earlier work. This is consistent with widespread first- or second-cousin marriage practices in agricultural societies in Middle Eastern and North African countries and in South Asia, including Muslim and Jewish groups, as documented by ethnographic or genomic studies. We note that cousin marriages were also common among royal dynasties and upper classes of Europe until the 20th century, and many prominent European scientists of that period are known to have married their first cousins, including Charles Darwin and Albert Einstein. These traditions are thought to have arisen through various social factors, including the inheritance of property in class societies.

Interestingly, we do not observe the relatively high rates of consanguineous marriage observed in modern-day Central Eurasia in any of the past societies we studied, in Antiquity or earlier. We naturally prefer to remain cautious, especially given the limited sample size of our advanced complex agriculturalist samples from West and Central Eurasia (n = 9 and n = 30, respectively). Nevertheless, it appears possible that present-day cultural patterns may have emerged relatively late in time.

"Most Kurds and South Indian Muslims and many Arabs are Shafi'i"

In the case of Kurds, this is somewhat incomplete as they are one of the most religiously diverse predominantly Islamic ethnicities: "Most Kurds are Sunni Muslims who adhere to the Shafiʽi school, while a significant minority adhere to the Hanafi school. Moreover, many Shafi'i Kurds adhere to either one of the two Sufi orders Naqshbandi and Qadiriyya. Beside Sunni Islam, Alevism and Shia Islam also have millions of Kurdish followers." Marriage practices among Kurds also show great variation: "Barth finds in his study of southern Kurdistan that in tribal villages 57% of all marriages were cousin marriages (48% bint 'amm marriages) while in a nontribal village made up of recent immigrant families only 17% were cousin marriages (13% bint 'amm)." So, without further breaking down marriage rates by religion among Kurds, it is rather hard to tell.

The Shafi'i Arabs are a minority Sunni Muslim population in most of the places in the Levant where they are present, sometimes in a fairly complex religious environment with Shi'ites, Druze, Christian Arabs, and Jews also present, so it is not a very straightforward matter to match cousin marriage rates among Arab Muslims in these places either.

I don't necessarily mean to say that Shafi'i doctrine itself discourages cousin marriage. I have no idea one way or the other on that point. But, my intuition is that this school of Islamic law is largely tracing some shares cultural and/or socioeconomic traits that often manifest is low cousin marriage rates. Determining whether that is the case, or whether the alignment between the school of Islamic law and local cultural marriage practices is almost purely a coincidence that isn't consistent across the school is something that the data in the places you mention isn't unequivocal and clear enough to establish. You could be right, but I'm skeptical of that possibility.

Another point, no mainstream Islamic school of law discourages cousin marriage and they simply cannot do so. Because Koran does not prohibit it and, more importantly, many early Muslims married one or more cousins, including Muhammad himself, according to their official Islamic biographies. Some of the imams of the mainstream Islamic schools of law made some negative remarks about cousin marriage due to its ill effects, but because of the accounts of early Muslims practicing cousin marriage they did not insist on that position and tolerated it.