There aren't a lot of modern human remains in Wallacea that date from prehistoric times that have been recovered, so even a relatively unexceptional find is notable. This report didn't or hasn't yet been able to successfully, sequence ancient DNA. 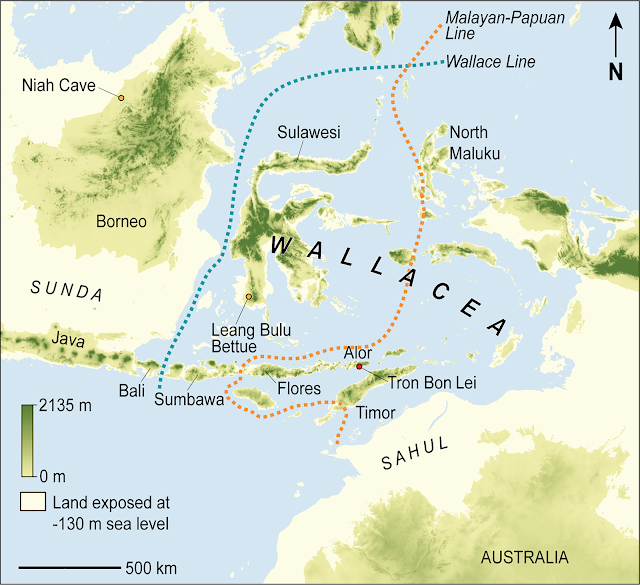 Major gaps remain in our knowledge of the early history of Homo sapiens in Wallacea. By 70–60 thousand years ago (ka), modern humans appear to have entered this distinct biogeographical zone between continental Asia and Australia. Despite this, there are relatively few Late Pleistocene sites attributed to our species in Wallacea. H. sapiens fossil remains are also rare. Previously, only one island in Wallacea (Alor in the southeastern part of the archipelago) had yielded skeletal evidence for pre-Holocene modern humans.

Here we report on the first Pleistocene human skeletal remains from the largest Wallacean island, Sulawesi. The recovered elements consist of a nearly complete palate and frontal process of a modern human right maxilla excavated from Leang Bulu Bettue in the southwestern peninsula of the island. Dated by several different methods to between 25 and 16 ka, the maxilla belongs to an elderly individual of unknown age and sex, with small teeth (only M1 to M3 are extant) that exhibit severe occlusal wear and related dental pathologies. The dental wear pattern is unusual. This fragmentary specimen, though largely undiagnostic with regards to morphological affinity, provides the only direct insight we currently have from the fossil record into the identity of the Late Pleistocene people of Sulawesi.

Not sure if you read this Wallacean middle Holoscene hunter-gatherer ancient DNA paper already:

Yeah. Saw it. Didn't have anything to worthwhile to add to the discussion at the time. Pretty much on paradigm.

Reuter's piece on it is hilarious bad. I've asked for a correction.