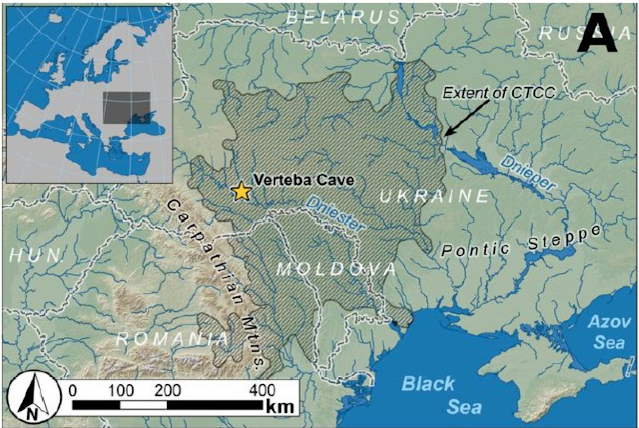 At his blog, Bernard examines a new ancient DNA paper looking at remains from the Central Ukraine, mostly from the Neolithic Cucuteni-Trypillia culture, but also with a three sets of remains from the early and the late Bronze Age in the same region. I quote from his summary of the paper at length below. The source paper is an open access pre-print.
The Cucuteni-Trypillia culture was a pre-metal age first farmer culture in an area where farming emerged relatively late for farmers using the Fertile Crescent package of domesticated crops and animals. This package arrived in the Central Ukraine about 1,000 to 1,500 years after this set of food production technologies arrived in the Balkans, lower Egypt, and the upper Indus River Valley. It arrived around the same time that this package reached the British Isles, which are much more remote in distance and latitude from this package's European source in Western Anatolia than Central Ukraine.
I don't know why it took so long to arrive here. Perhaps the hunting and gathering was so good in the Central Ukraine (perhaps due to abundant fish supplies in the river basins) that the pressure to transition was weaker, or perhaps the local hunter-gatherers were militarily more effective, or perhaps there is some ecological issue of which I am not aware.
As Wikipedia explains:

The majority of Cucuteni–Trypillia settlements consisted of high-density, small settlements (spaced 3 to 4 kilometers apart), concentrated mainly in the Siret, Prut and Dniester river valleys.
During its middle phase (c. 4000 to 3500 BCE), populations belonging to the Cucuteni–Trypillia culture built the largest settlements in Neolithic Europe, some of which contained as many as three thousand structures and were possibly inhabited by 20,000 to 46,000 people.
One of the most notable aspects of this culture was the periodic destruction of settlements, with each single-habitation site having a lifetime of roughly 60 to 80 years. The purpose of burning these settlements is a subject of debate among scholars; some of the settlements were reconstructed several times on top of earlier habitational levels, preserving the shape and the orientation of the older buildings. One particular location; the Poduri site in Romania, revealed thirteen habitation levels that were constructed on top of each other over many years.

The results largely confirm expectations from prior work.
The Neolithic mtDNA results, Y-DNA results, and autosomal DNA are what you would expect for Eastern Europe, with a heavy component of Anatolian farmer, a bit of Western European hunter-gatherer ancestry (both autosomal and uniparental), and a bit of Caucasian and Eastern Eurasian hunter-gatherer ancestry.
Despite directly abutting the Pontic-Caspian steppe, these people have only 7% steppe ancestry (probably derived mostly from the Caucasian hunter-gatherers integrated into that community) and are overwhelmingly first farmer migrants from Central Europe who would have replaced local hunter-gatherers in the region, rather than local hunter-gatherers who were converted to farming and herding.
The early Bronze Age woman has autosomal DNA basically identical to a Polish Corded Ware individuals and shows continuity in mtDNA. The late Bronze Age woman is comparable to a Hungary Bell Beaker individual and also shows continuity in mtDNA.
The replacement of first farmer people with genetic distinct high steppe ancestry Bronze Age people is expected and typical of Europe as a whole.
The nuance of the transition from a Central European Corded Ware type genetic profile in the early Bronze Age to a Central European Bell Beaker type genetic profile in the late Bronze Age, however, is a significant detail that wasn't strongly expected. And, despite the tiny sample sizes, previous experience with small ancient DNA samples that were subsequently broadened, and the mechanics of how autosomal DNA works, suggest that these samples can be safely assumed to be a reliable indicator of broad applicability in the region at those times.

Farmers arrived in the Balkans during the 7th millennium BCE and then dispersed along two main routes: along the shores of the Mediterranean and along the shores of the Danube. Unlike Central Europe, Eastern Europe including Ukraine, Moldova, Romania and Western Russia, did not adopt agriculture until 4500 BCE. The Cucuteni-Trypillia cultural complex brings together different cultures of the Middle Neolithic in Eastern Europe, which flows into the Black Sea. . . .
Pere Gelabert and his colleagues have just published a paper entitled: Genomes From Verteba Cave Suggest Diversity Within The Trypillians In Ukraine. They sequenced the genome of twenty ancient individuals from the Verteba cave in Ukraine belonging to the Cucuteni-Trypillia culture, most of which are dated between 3770 and 3670 BCE. . . .
However, one individual is dated to the Early Bronze Age: 1952 to 1774 BCE. and another from the Late Bronze Age: 980 to 948 BCE. Among these twenty individuals, there are eight women and twelve men. The mitochondrial haplogroups of the Neolithic individuals are T2b, H, HV, K1, N1, J1, U5 and T2c. The Early Bronze Age individual is mtDNA HV and the Late Bronze Age individual is mtDNA T2. The men are from the Y chromosome haplogroup: G2a, I2, and C1a. The two Bronze Age individuals are women. . . .
[In a principal component analysis of autosomal DNA] Farmers in the Cucuteni-Trypillia culture are located in close proximity to other Neolithic European farmers such as those in the LBK culture. The Final Bronze Age individual is located close to individuals of the Bell Beaker culture of the Czech Republic, Hungary and Poland, and the Early Bronze Age individual close to individuals of the Corded Ware culture, with a high proportion of steppe ancestry.
The authors then performed an analysis with the ADMIXTURE software. Individuals of the Cucuteni-Trypillia culture have a high proportion of the yellow component characteristic of Anatolian farmers. They also show a low proportion of hunter-gatherer components from the west (in red), but also hunter-gatherer components from the east and the Caucasus (in light and dark purple):

The use of the f4 statistic and the qpAdm software shows that the farmers of the Cucuteni-Trypillia culture have a low proportion of steppe ancestry (on average 7%). The relatively high proportion of hunter-gatherer ancestry from the west (up to 18%) is probably linked to the resurgence of this ancestry in the Middle Neolithic.

From Bernard's Blog (translated from French with Google Translate and my editorial improvements upon that translation). The abstract of the paper discussed states:

The transition to agriculture occurred relatively late in Eastern Europe, leading researchers to debate whether it was a gradual, interactive process or a colonization event. In the forest and forest-steppe regions of Ukraine, farming appeared during the fifth millennium BCE, associated with the Cucuteni-Trypillian Archaeological Complex (CTCC, 4800-3000 BCE).

Across Europe, the Neolithization process was highly variable across space and over time. Here, we investigate the population dynamics of early agriculturalists from the eastern forest-steppe region based on analyses of 20 ancient genomes from the Verteba Cave site (3789-980 BCE). The results reveal that the CTCC individuals’ ancestry is related to both western hunter gatherers and Near Eastern farmers, lacks local ancestry associated with Ukrainian Neolithic hunter gatherers and has steppe ancestry. An Early Bronze Age individual has an ancestry profile related to the Yamnaya expansions but with 20% ancestry related to the other Trypillian individuals, which suggests admixture between the Trypillians and the incoming populations carrying steppe-related ancestry. A Late Bronze Age individual dated to 980-948 BCE has a genetic profile indicating affinity to Beaker-related populations, detected close to 1,000 years after the end of the Bell Beaker phenomenon during the Third millennium BCE.

I stand corrected and will fix the post when I get a chance. Clearly my previous understanding was mistaken.