The Black Plague Was Present In Bronze Age Britain

The Bell Beaker people brought the plague to Britain, and presumably, they also brought it to much of the rest of Western Europe as well (consistent with its probable original origins in East Eurasia).

Pooja Swali and colleagues have just published a paper titled: Yersinia pestis genomes reveal plague in Britain 4,000 years ago. They identified the genome of the bacterium Yersinia pestis in the genome of two skeletons (C10091 and C10098) from the disarticulated remains of more than 40 individuals disposed in a natural well at Charterhouse Warren Farm in Somerset, England: 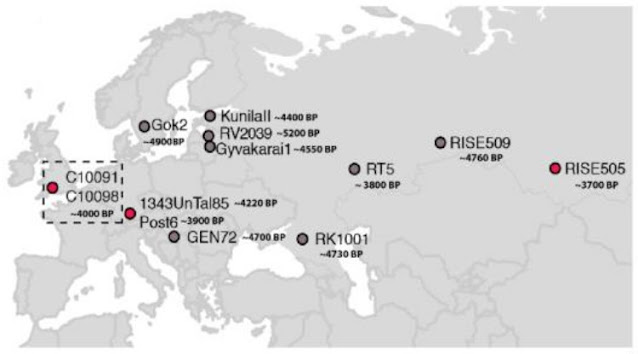 These individuals show signs of fatal perimortem trauma. They are accompanied by objects belonging to the Bell Beaker culture. The two individuals with the plague are two children aged 10 and 12. One of them has been directly radiocarbon dated between 4145 and 3910 years old. The presence of mortal wounds on the skeletons of this well makes it improbable that this well was used as a burial following a plague epidemic.

From Bernard's blog (Google translated from the original French).

Notably, for the first time, Google translate correctly translated the phrase "Bell Beaker culture", rather than translating the French word literally, which isn't similar to the English language term at all.

A phylogenetic analysis of the Bronze Age British plague genome samples also illustrates that there were distinct Neolithic, Bronze Age, and Medieval waves of the Black Plague in Europe, each with distinct common ancestors. 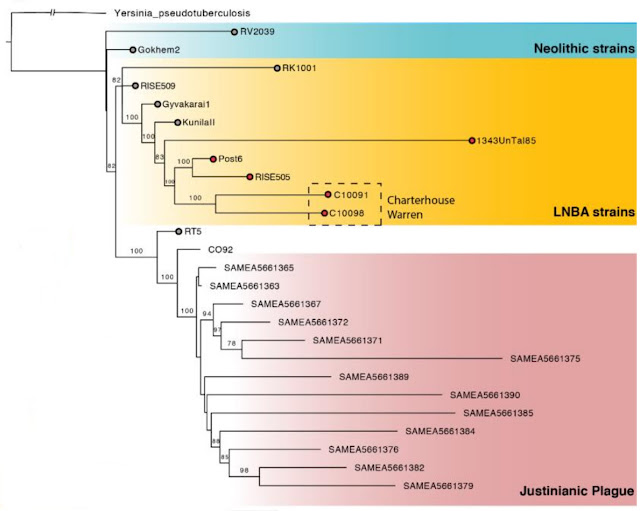 Since we don't have written historical accounts clearly associated with the plague prior to the Justinian plague (which raged from 541-549 CE in the Eastern Roman Empire), it is hard to know if the earlier variants of it were as catastrophically deadly as the Medieval variants that killed a third of the people in many parts of Europe.
Posted 12:42 PM
Email ThisBlogThis!Share to TwitterShare to FacebookShare to Pinterest
Labels: anthropology, Europe, genetics, history, language