Dark matter models are no better than MOND at describing the Milky Way in the face of detailed observations, despite having more free parameters. Moffat's modified gravity doesn't work as well, despite its broader range of applicability. 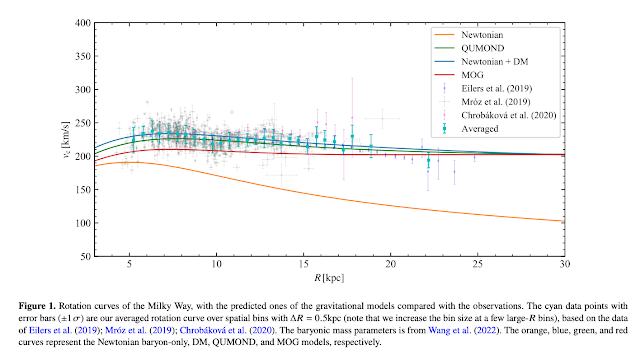 Aiming at discriminating different gravitational potential models of the Milky Way, we perform tests based on the kinematic data powered by the Gaia DR2 astrometry, over a large range of (R,z) locations. Invoking the complete form of Jeans equations that admit three integrals of motion, we use the independent R- and z-directional equations as two discriminators (TR and Tz). We apply the formula for spatial distributions of radial and vertical velocity dispersions proposed by Binney et al., and successfully extend it to azimuthal components, σθ(R,z) and Vθ(R,z); the analytic form avoids the numerical artifacts caused by numerical differentiation in Jeans-equations calculation given the limited spatial resolutions of observations, and more importantly reduces the impact of kinematic substructures in the Galactic disk.

It turns out that whereas the current kinematic data are able to reject Moffat's Modified Gravity (let alone the Newtonian baryon-only model), Milgrom's MOND is still not rejected. In fact, both the carefully calibrated fiducial model invoking a spherical dark matter (DM) halo and MOND are equally consistent with the data at almost all spatial locations (except that probably both have respective problems at low-|z| locations), no matter which a tracer population or which a meaningful density profile is used. Because there is no free parameter at all in the quasi-linear MOND model we use, and the baryonic parameters are actually fine-tuned in the DM context, such an effective equivalence is surprising, and might be calling forth a transcending synthesis of the two paradigms.

Yongda Zhu, et al., "How Close Dark Matter Halos and MOND Are to Each Other: Three-Dimensional Tests Based on Gaia DR2" arXiv:2211.13153 (November 23, 2022) (accepted for publication in MNRAS).
Posted 11:50 AM
Email ThisBlogThis!Share to TwitterShare to FacebookShare to Pinterest
Labels: astronomy, dark matter, physics

It would be very interesting to see how Deur's approach would compare!

It is identical to MOND in spiral galaxies.

what about non- spiral galaxies.

Not automatically in non-spiral galaxies, although in that case it depends somewhat on the distribution of matter within the galaxies, so MOND and Deur are closer than one might expect.

There is a significant difference between MOND and Deur in galaxy clusters which Deur predicting stronger effect usually attributed to dark matter than MOND.