ART038 (~3000 calBCE) remains the oldest sample with the V1636 and R1b Y-chromosome mutations in the West Asian ancient DNA record. Ergo, there's nothing to suggest that V1636 or R1b entered Eastern Europe from West Asia. 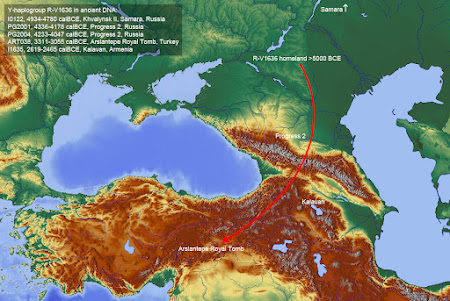 I have no serious doubt that he is correct in this particular detail.
The text in the top left corner of his map identifies this kind of Y-DNA in three different ancient DNA samples from the 4000s BCE on the Russian steppe, and an Armenian ancient DNA example of this kind of Y-DNA from the mid-2000s BCE.
A catalogue of ancient DNA samples containing it can be found here. It has twenty examples of ancient steppe Y-DNA R-V1636 older that any its three example of it in the Caucuses or Anatolia (at four different dates, all in the 4000s BCE), the oldest of which has a mean estimated age of 4900 BCE (before present ages are defined in the historical genetics as years before 1950 CE). The last few entries are as follows:

The Maykop entry, which is between Anatolia and the steppe geographically and in time, is 225 years older than the oldest Anatolian example at a mean estimated age of 3450 BCE, and is 688 years younger than the closest ancient DNA sample from the steppe shown.
The overall phylogeny of Y-DNA R, moreover, also supports the conclusion that it has a steppe, rather than a West Asian origin.
The estimated most recent common ancestor of Y-DNA R-V1636 (presumably based upon mutation rate dating constrained by proven ancient DNA examples) is 4950 BCE.
Ancestral branches of Y-DNA R1b to it, diverged from 15,000 BCE to about 26,000 BCE for R1-M173 (the root of the R1 clade). Thus, R1b-L754, for example, has already branched off from R1b-V88, at the dawn of the Holocene era. 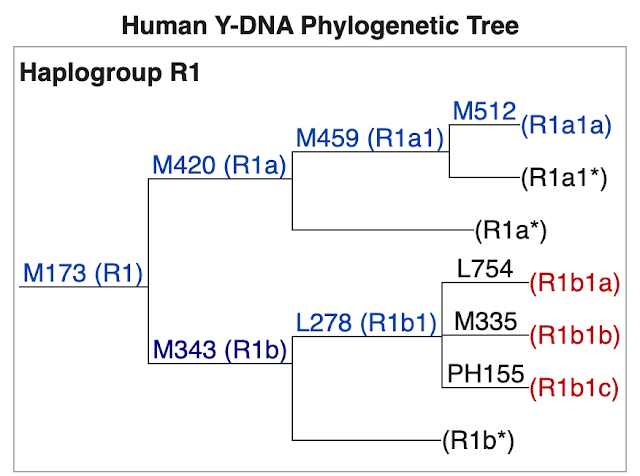 Chart from here. The place of Y-DNA R-V1636 in the overall Y-DNA R tree is also shown here in a slightly harder to digest form.
Posted 9:59 AM
Email ThisBlogThis!Share to TwitterShare to FacebookShare to Pinterest
Labels: Europe, genetics, history, language, West Asia

You can't determine the origin of a haplogroup based on a single sample. Genetic diversity is just as important as frequency. When we know there is unmixed R1b-269 in Iran - and Iranians/CHG moved into the Steppe - it's more likely that the 269 in Yamnaya came from NW Iran/Armenia or CHG.

If it was a single sample, I'd agree with you. But, it isn't. There is a lot more context to it than that - like phylogeny, like archaeology, like the low contribution of Iranian/CHG to the steppe. The likelihood that the 269 in Yamnaya came from NW Iran/Armenia or CHG is virtually nil.

"If it was a single sample, I'd agree with you. But, it isn't. There is a lot more context to it than that - like phylogeny, like archaeology, like the low contribution of Iranian/CHG to the steppe. The likelihood that the 269 in Yamnaya came from NW Iran/Armenia or CHG is virtually nil."

What about diversity? What's your basis/reference for a "low contribution of Iran/CHG to the Steppe". Last I heard, per Lazaridis - it was a significant contribution. On broadscale PCA's the Steppe is intermediate between Iranian Neolithics and EHG. You may promote admixture results with proximal sources, but that misses the fact there is Iranain/CHG in the Steppe.