Mid-November And No Definitive Higgs Boson Signals Yet 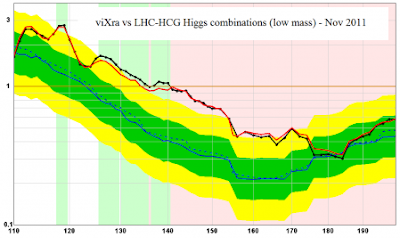 The latest Higgs boson exclusion plot in the interesting mass region v. viXra crude combinations from months ago in red

Phil Gibbs has the latest combination plot from the Higgs boson search at LHC which closely confirms his much earlier back of napkin combination in all the places where it matters.

According to Jester, the latest report is that "the Standard Model Higgs is excluded at 95% confidence level for all masses between 141 GeV and 476 GeV." The exclusion is 132-476+ GeV at 90% confidence, and consideration of electroweak stability provide further bias towards a low end mass range if there is a Higgs boson (as do electroweak precision measurements). In fact, that is conservative. There really isn't that is a plausible Higgs boson signal at any mass below 600 GeV and some of the potential masses between 120 GeV and 140 GeV also seem highly unlikely give that data assembled to date from all sources.

A Higgs boson mass of less than 115 GeV was ruled out before the LHC started its work.

The absence of a Higgs boson of less than 476 GeV would rule out both the Standard Model Higgs boson and a large swath of the more popular SUSY models. Theorists are prepared, of course, with "heavy Higgs" (see, e.g. Marco Frasca) and "Higgsless" models if they become necessary to explain the data, but this result would clear all of the front runners out of the race to be the correct theory of particle physics, at least in their unmodified forms. There are also a variety of plausible theories that could suppress the signal of a Higgs boson, while allowing it to still do the job that it does in the Standard Model.

One hot spots where a Standard Model Higgs boson could appear are a little under 120 GeV mass, where there is perhaps a bit over a 2 sigma excess over the expected value (1.6 sigma with look elsewhere effects considered), the excess has a pretty narrow width, the electroweak precision predictions are favorable, and the resolution of the data to data is lowest so there couldn't be a strong signal there no matter what due to sample size limitations.

The other hot spot is around a 140 GeV mass, where there is a wide excess of about two sigma, but the resolution of the data to date would suggest that a real SM Higgs boson would produce a stronger and sharper signal by this point (the mean result we would expect at this mass if there was a SM Higgs boson at this mass would be about 4 sigma for the amount of data collected to date). The only explanation I've heard for a wide excess from about 125 GeV to 150 GeV in the combined plot, is that there is probably something wrong in the Standard Model background modeling or some other sort of unknown systemic error, as no particle that is predicted by any model that anyone is thinking about very seriously produces that kind of extremely wide excess. CMS and Atlas have opposite directions of signal in some subcomponents of their experiments which is less encouraging than weak signals in the same direction from both.

Data from the diphoton channel disfavors a Standard Model Higgs boson with a mass from about 120 GeV to 137 GeV, leaving only windows from 115 GeV to 120 GeV and 137 GeV to 141 GeV looking at possible in that experiment. The so called "golden channel" data also disfavors Higgs boson masses in the high 120s and low 130s GeV mass range.

Corrected for the "Look Elsewhere Effect" (LEE) the maximum statistical significance of the combined result sees a 1.6 sigma result just under 120 GeV and well under a 1 sigma result elsewhere (even if there was a Higgs boson an exclusion below 124 GeV was predicted to be possible with the amount of data collected so far and in actuality the exclusion was made down to 141 GeV). The broad width of the excess in the low mass range comes from the mass uncertainty in the ZZ and WW channels modulated by the diphoton channel, and the number of excess events there in absolute numbers isn't that big. The excess events are closer to the Standard Model background prediction than to the signical of a Higgs boson at that mass.

A CERN meeting in December would be the first possible date to announce preliminary results from the full 2011 run of both experiments, although official announcements of the analysis of that data could be as late as a conference planned for March 2012. Yet, even if there is no official announcement until March, it is hard to believe that credible rumors won't leak sometime before then.

The more time passes from the end of the 2011 data collection run without a credible rumor (this is an experiment that involves thousands of people who are very clever when it comes to physics and office politics), the more likely it is that the Standard Model Higgs boson could be ruled out entirely.

Bottom line: 117-119 GeV Higgs bosons or bust! And, either outcome would be interesting.

I have been, and continue to be, ambivalent about the prospects that a Standard Model Higgs boson really exists, or even that one is necessary. My own intuition is that we've found all of the fundamental particles, but that we aren't doing all the math right and may be missing some key relationships that serve the same function as the Higgs does in the Standard Model.

Meanwhile, the latest report out of the OPERA experiment discounts some of the more popular possible sources of experimental error in their result showing neutrinos travelling at faster than the canonical experimentally measured speed of light by a favor of about one part per 10^5.
Posted 12:20 PM
Email ThisBlogThis!Share to TwitterShare to FacebookShare to Pinterest
Labels: Higgs boson, physics