The top quark mass is the only quark mass that can be directly measured.  All other quark masses must be inferred from the masses of hadrons believed to contain those quarks in a model dependent manner.

The top quark mass is the only quark mass that can be directly measured.  All other quark masses must be inferred from the masses of hadrons believed to contain those quarks in a model dependent manner.

The new result is 270 MeV higher than the previous best estimate (0.3 standard deviations from the previous best estimate, which is unsurprising since the new result uses most of the same data as the old result and merely analyzes it more rigorously and precisely) and has a 14% smaller margin of error (with almost all of the improvement coming from a much smaller reduced statistical error in a pooled data set).

A previous global electroweak observable based fit including early LHC data in 2012 had come up with a top quark mass of 173,520 ± 0.880 MeV which was about 450 MeV more than the previous best estimate and about 180 MeV more than the current combined analysis. These global fits are based upon Standard Model relationships between the Higgs boson mass, top quark mass and W boson mass. These fits are most sensitive to the W boson mass, then to the top quark mass, and are least sensitive to the precise value of the Higgs boson mass. 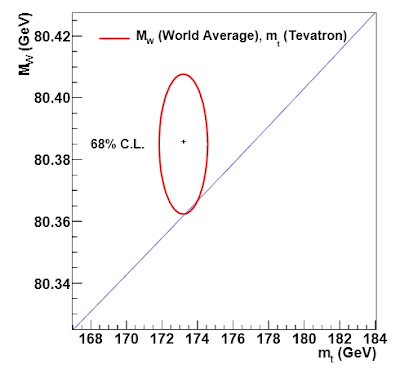 The diagonal line shows the combinations of the top quark mass and W boson mass that are expected in the Standard Model at a Higgs boson mass of about 125,000 MeV, with the thickness of the line reflecting the range of uncertainty in that measurement. The latest estimate of the Higgs boson mass shift that line imperceptibly to the right, while the latest estimate of the top quark mass shift the center point of the 1 standard deviation confidence interval ellipse to the right by about a third of a hash mark.  The greatest impact of a global fit is to favor a low end estimate of the W boson mass of about 80,362 MeV, rather than the current best estimate from the Particle Data Group of 80,385 ± 15 MeV.

An extended Koide's rule estimate of the top quark mass using only the electron and muon masses as inputs, predicted a top quark mass of 173,263.947 ± 0.006 MeV, which is about 80 MeV less than the latest direct measurement.  This is within 0.1 standard deviations from the new directly measured value.

Prior to the new combined measurement, the extended Koide's rule estimate was 0.22 standard deviations from the measured value.

To four significant digits the t-b-c triple's Koide ratio which is predicted to be 0.6667 to four significant digits is 0.6695 at the PDG values and is 0.6699 using the new combined value for the t quark mass, and the new precision values for the b quark and c quark masses.  This is still a better fit than any of the other quark triples, although it is a less good fit than it was before the new precision measurements were reported.

The original Koide's rule predicts a mass of the tau lepton from the electron and muon masses that is within 0.93 standard deviations of the currently measured value.

All of the other measured values of the Standard Model quark masses are model dependent estimates based on QCD and hadron masses, and definition issues arise because a quark's mass is a function of the energy scale at which it is measured.  The pole mass of a quark is roughly speaking, the mass of a quark at an energy scale equal to its own rest mass and this is the number quotes for the bottom quark and charm quark as well as for the top quark.  The pole masses of the strange quark, down quark and up quark are ill defined and instead their masses in what is known as the MS scheme at an energy scale of 2 GeV (i.e. slightly more than the mass of two protons, two neutrons or one proton and one neutron), is normally used instead.

The two differences in masses between the neutrino mass states are known to a precision of less than 10-5 MeV and 10-4 MeV respectively (the smaller one is about 0.007 eV, while the larger one is about 0.046 eV).

The absolute value of the lightest neutrino mass has been directly measured to be less than 2*10-6 MeV (i.e. 2 eV), and is constrained in a model dependent way by cosmic background radiation and other astronomy measurements to be less than 10-7 MeV (i.e. 0.1 eV).  If the neutrinos have a "normal" rather than "inverted" mass hierarchy lightest electron neutrino mass is probably on the order of 0.001 eV.

The newly discovered Higgs boson has a global best fit measured mass of 125,900 MeV with an uncertainty about about ± 400 MeV, which is just over half of the absolute value of the uncertainty in the top quark mass.  This is 79 MeV lower than the expectation if the Higgs boson mass is exactly equal to the W boson mass plus 1/2 of the Z boson mass (about 0.2 standard deviations from the measured value).

Why Is The Accurate Determination Of The Top Quark Mass So Important?

The Top Mass Squared Uncertainty Is Even More Dominant

The dominance of any imprecision in the top quark mass to overall model fits is further amplified in cases where the quantities compared are the square of the masses rather than the masses themselves (e.g. comparing the sum of squares of the Standard Model particle masses to the almost precisely identical square of the vacuum expectation value of the Higgs field).

The difference between the high end and low end of the square of the current combined estimate of various fundamental particle masses (i.e. their uncertainty) is as follows (in MeV^2, using PDG error bars for cases other than the top quark):

All other Standard Model fundamental particles mass squared combined: 207,683,572 (about 28% of the total).

What is the best fit value for the top quark mass?

While both relationships are possible within experimental error, they cannot be true simultaneously despite being quite similar, at least for the pole masses.  It is possible to imagine some running mass scale where they might coincide, however, and if there is some energy scale at which this happens, this might be viewed as the energy scale at which fermion-boson symmetry (much like that of supersymmetry, but without the extra particles) breaks down.

Footnote:  The measured Higgs boson mass is very nearly the mass that minimizes the second loop corrections necessary to convert the mass of a gauge boson from an MS scheme to a pole mass scheme.

This is a bit on the low side, although consistent at two sigma.

A study based on ratios of quarkonia moments estimates the charm quark mass at 1261(18) MeV and the bottom quark mass at 4173(10) MeV, both of which are consistent with the precision estimates from the study cited in the original post.

D0 most precise ever single measurement:

This is still on the high end.