There Are Three And Only Three Generations Of Standard Model Fermions 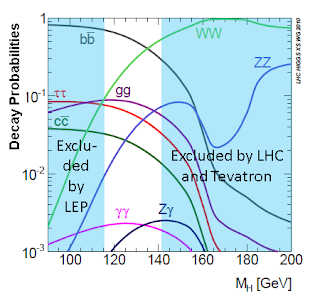 Predicted Decays Of The Standard Model Higgs Boson By Boson Mass Via Matt Strassler's Blog. The relevant percentages from the cross-section of the chart for the now known mass of the Higgs boson are as follows:

Other even more rare decays of Higgs bosons are predicted [in the Standard Model] but happen too rarely to have an expectation that they could be detected at the LHC at this point.

The total above exceeds 100% and leaves no space for new decays due to rounding errors.

All decays except the gluon channel, charm channel and mixed photon/Z channel have been observed at the LHC. The missing channels are difficult to detect, partially because they are smaller and partially due to large background that confound efforts to attribute observed decays to Higgs boson decays.

We know that the Standard Model's portfolio of fundamental fermions that interact via the weak force is complete up to particles with masses up to 45 GeV/c^2 (half the Z boson mass) because we have many decades of voluminous data from multiple colliders regarding W and Z boson decays, and no particle that interacted via the weak force in accordance with the Standard Model (such as fourth generation fermions) have been detected.

Therefore, any new particle that interacts in a Standard Model manner via the weak force must have more than 45 GeV of mass.

Each generation of fermions in the Standard Model must have one up-like quark, one down-like quark, one charged lepton, and one neutrino, for reasons of mathematical consistency.

How Does The Standard Model Higgs Bosons Decay?

With one exception (photon-Z boson decays), Higgs bosons, like the Z boson, decay either to particle and antiparticle pairs of fundamental fermions, or to complementary pairs of Standard Model gauage bosons with masses up to half of the Higgs boson mass (roughly 62.5 GeV).

Setting aside the bosonic decays of the Higgs boson for a moment, the heavier a fundamental fermion pair that is not mass-energy conservation barred (i.e. the top quark, top antiquark pair which has a combined 346 GeV of mass plus or minus which is much more than the 125ish GeV mass of the Higgs boson), the more likely it is to be produced in Higgs boson decays.

Thus, bottom quark pair decays are most common, then tau lepton pairs, then charm quark pairs, with might lighter fundamental fermion pairs (strange quarks, muons, down quarks, up quarks, electrons, and neutrinos, in approximately that order) all having vanishingly small branching ratios in Higgs boson decays of the 125 GeV Higgs boson.

So far, the branching ratios of Higgs boson decays that are observed are consistent with the Standard Model Higgs Boson's decays up to reasonable margins of error.  But, we don't have a long enough track history with Higgs boson decays to have accurately measured all of its possible decay modes or to rule out new decay modes that aren't too common or involve relatively light particles.

What If There Were Additional Weakly Interacting Standard Model Fermions That Can Be Produced In Higgs Boson Decays?

For a new fundamental fermion that interacts weakly to be produced in Higgs boson decays, it must have a mass of more than 45 GeV, but less than 62.5 GeV.

If such a fermion existed, decays of pairs of these particles would be far more common than bottom quark decays, because it would be the heaviest available fermion pair decay available to the Higgs boson.  While we struggle to see tau pair and charm pair decays with existing data, there is no possible way that the scientists at the LHC could miss a Higgs boson decay into 45 GeV to 62.5 GeV fundamental fermions.

We have no reason to expect new quarks in that mass range, because the top quark is already heavier than any potential quark that could be seen in this mass range and historically, new quarks have always been heavier than the already known ones.  If they weren't, existing quarks would decay to the new quark flavor and we know that this has never happened.  So, it would be very surprising to see a new down-type quark that did not have a mass which was much greater than 174 GeV, which is well out of the allowed range for Higgs boson decays. Direct searches for fourth generation quarks at the LHC and prior experiments are more stringent, ruling out a fourth generation b quark with a mass of less than 675 GeV, and a fourth generation t quark with a mass of less than 782 GeV.

Direct searches for heavy charged leptons, however, already exclude them up to 100.8 GeV according to the Particle Data Group, with is quite far above the 1.776 GeV of the tau lepton and well in excess of our naive expectations regarding a fourth generation charged lepton mass.

Now, the heaviest active neutrino has a mass of not more than about 0.1 eV (we know those from cosmology data and it is not inconsistent with neutrino oscillation data), and all three of the Standard Model neutrinos interact weakly, so we know that there is no Standard Model neutrino with a mass of 45 GeV or less. (The Particle Data Group conservatively puts the limit at only 39.5 GeV).

But, this additional exclusion is not entirely clear in the way that the charge lepton exclusion would be.  This is because while everyone agrees that the neutrino interacts via the weak force, there is no agreement or experimental evidence to tell us if Standard Model active neutrinos have a coupling to the Higgs boson and acquire their massed by that means or not. Even if they did, the likelihood of a Standard Model Higgs boson with a 125 GeV mass decaying to any of the known neutrino-antineutrino pairs is so unlikely that we would be unlikely to see one and if we did the only signal of that would be missing traverse energy which could be a myriad of BSM particles, in addition to being a Standard Model active neutrino.  However, given that the mass gap between any fourth generation neutrino and the next lightest neutrino established by Z boson decays is so huge, it hardly matters.

As you may have noticed in the analysis above, we actually don't gain any additional power to exclude fourth generation Standard Model fermions from the observed Higgs boson decays. But, that doesn't mean that our Higgs boson decay information hasn't provided new information.

In principle, there could be particles that are over 45 GeV, interact with the weak force, couple to the Higgs boson and do not have analogs in the Standard Model.  Any such particles are now ruled out up to 62.5 GeV of mass, rather than 45 GeV prior to the discovery of the Higgs boson.

Likewise, in principle, there could be a beyond the Standard Model particle that couple to the Higgs boson, but do not decay via the weak force, and hence wouldn't show up in W or Z boson decays. These are now ruled out, at least, in the mass range from about 4 GeV (at or near the bottom quark mass) to 62.5 GeV (half of the Higgs boson mass).

These constraints effectively mean that BSM particles below the 62.5 GeV scale, if they exist must not have weak force interactions and if they have Higgs boson interactions, must be significantly lighter than a bottom quark (a low energy region where countless searches at multiple colliders over many decades have failed to show any sign of a BSM resonance, unless some resonance currently classified as a hadron with not fully established properties is really a misclassified fundamental particle, which is quite unlikely).

I'm also pretty convinced that there is no way that any electrically charged particle weighing less than a bottom quark could possibly have been overlooked.

So, if BSM particles exist anywhere they are either electrically neutral light particles that don't interact via the weak force or derive mass from the Higgs mechanism (and realistically, probably can't have strong force interactions either, as it would also be virtually impossible for light, strongly interacting fundamental particles to be missed), or they are much more massive than the top quark.

The former category of BSM particles are basically sterile neutrino-like fermions and non-SM force carrying bosons (e.g. the hypothetical graviton and hypothetical particles such as axions or the self-interaction bosons of dark matter, if it exists).  The latter encompasses everything else.
Posted 3:44 PM
Email ThisBlogThis!Share to TwitterShare to FacebookShare to Pinterest
Labels: conjectures, experimental BSM data, Higgs boson, neutrinos, physics, Standard Model physics