Recently analyzed ancient DNA from the greater Middle East has revealed that there were stark genetic differences between populations that where geographically relatively close to each other at the dawn of the Neolithic revolution when the very earliest farming communities had population genetics similar to those of the hunter-gatherers that preceded them - something that would quickly change once the Neolithic revolution really took hold and began a largely demic expansion (i.e. through mass migration rather than cultural diffusion of ideas).

New genetic data from one of the most basal human populations on Earth, the KhoeSan of Southern Africa, suggest that deep genetic divisions between hunter-gatherer populations were the norm, rather than the exception, and have uncovered several new genetically distinct populations ancestral to the KhoeSan which have vanished through full introgression into the South African Bantu and white populations that arrived later.

The name KhoeSan refers to several indigenous populations in southern Africa; KhoeSan people speak "click" languages and include both hunter-gatherer groups and pastoralists. They are genetically distinct and strikingly isolated from all other African populations, suggesting they were among the first groups to diverge from the ancestors of all humans. . . . It quickly became apparent that the geography of the Kalahari Desert was closely tied to the population structure that they uncovered. The outer rim of the Kalahari Desert presented a barrier to genetic mixing, while populations that live within the Kalahari basin mixed more freely.

Their findings suggest a more complex history for the KhoeSan populations than originally predicted. Previous work argued for a northern vs. southern divergence pattern among the human groups, but this new work identifies five primary ancestries in the region, which points to a geographically complex set of migration events responsible for the heterogeneity observed in the region.

Henn points out that there are more KhoeSan populations who were not sampled. Sampling in the area is a significant challenge for a number of reasons, including the complex politics of the region in the post-Apartheid era. Most populations in South Africa and Zimbabwe no longer identify as KhoeSan and have been absorbed into other populations over the past 500 years. Still, their findings add to the body of knowledge surrounding the history of southern African populations -- while also complicating them
. . .

"There is a huge amount of diversity in southern Africa populations. These groups speak differently, look distinct, and have divergent genetic histories. They are not homogenous people, and the historic and prehistoric factors that led to their divergence are still being explored. It's amazing how much work there is to do."

Via at Science Daily.  The abstract and paper citation to this study are as follows (interestingly, the lead author is still a student):


Recent genetic studies have established that the KhoeSan populations of southern Africa are distinct from all other African populations and have remained largely isolated during human prehistory until ∼2000 years ago. Dozens of different KhoeSan groups exist, belonging to three different language families, but very little is known about their population history.

We examine new genome-wide polymorphism data and whole mitochondrial genomes for >100 South Africans from the ≠Khomani San and Nama populations of the Northern Cape, analyzed in conjunction with 19 additional southern African populations.

Our analyses reveal fine-scale population structure in and around the Kalahari Desert. Surprisingly, this structure does not always correspond to linguistic or subsistence categories as previously suggested, but rather reflects the role of geographic barriers and the ecology of the greater Kalahari Basin. Regardless of subsistence strategy, the indigenous Khoe-speaking Nama pastoralists and the N|u-speaking ≠Khomani (formerly hunter-gatherers) share ancestry with other Khoe-speaking forager populations that form a rim around the Kalahari Desert.

We reconstruct earlier migration patterns and estimate that the southern Kalahari populations were among the last to experience gene flow from Bantu speakers, ∼14 generations ago. We conclude that local adoption of pastoralism, at least by the Nama, appears to have been primarily a cultural process with limited genetic impact from eastern Africa.

Maju has commentary on the study here.  I've lifted the figure below from the paper from his blog post about it: 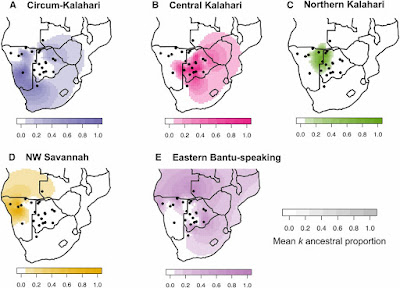 Another gem of new genetic information comes from the ASHG 2016 (American Society for Human Genetics) Conference abstracts.  One of those abstracts finds evidence of archaic admixture into the San People from an archaic hominin other than Neanderthals and Denisovans, but more closely related to both than to modern humans.

The sequencing of complete Neanderthal and Denisovan genomes has provided several insights into human history. One important insight stems from the observation that modern non-Africans and archaic populations share more derived alleles than they should if there was no admixture between them. We now know that the ancestors of modern non-Africans met, and introgressed with, Neanderthals and Denisovans.

Here, we present results from a composite likelihood estimator of archaic admixture, which allows multiple sources of archaic admixture. We apply the method to archaic introgression, but it can be used to estimate ancient admixture among any four populations where the modeled assumptions are met. This joint estimate of Neanderthal and Denisovan admixture avoids the biases of previous estimators in populations with admixture from both Neanderthal and Denisova. To correct for dependence in our data, we use a moving blocks bootstrap to calculate confidence intervals.

With assumptions about population size and more recent population separation dates taken from the literature, we estimate the archaic-modern separation date at ~440,000 ± 300 years ago for all modern human populations. We also estimate the archaic-modern mixture proportion in the 1000 genomes, and the modern genomes sequenced with the high coverage Neanderthal and Denisovan genomes. We report those estimates here, support several prior findings, and provide evidence for a lower level of Denisovan admixture (0.0191 [0.0184, 0.0197]), relative to Neanderthal (0.0256 [0.0247, 0.0265]), in Melanesia. On the basis of an excess of shared derived alleles between San, Neanderthal, and Denisova we suggest that a third archaic population related more closely to Neanderthal and Denisova than to modern humans introgressed into the San genomes studied here.

Prior studies have also found evidence of a couple of archaic admixture into African modern human populations based upon genetic evidence, although no one has been able to recover ancient DNA from any African archaic hominins, mostly due to a lack of conditions suitable to preserve that DNA. This abstract tends to confirm that indeed there was archaic admixture in Africa as well as Eurasia, although again, the particular archaic homo species involved is unknown.
Posted 11:08 AM
Email ThisBlogThis!Share to TwitterShare to FacebookShare to Pinterest
Labels: Africa, culture, evolution, genetics, history, technology

Where did you read this?

I don't need to follow the links. I have the data, and I know it's not true.

The paper cited was authored by some of the biggest names in the field, Lazaridis, Patterson, Pinhasi, Reich et al.

Have you told them that they have got it wrong, and what has been their response?

Whatever the case, I'm interested to know why you think that the commentators, the paper's interpretation, or the data in the paper, as the case may be, is wrong. I don't have any strong philosophical commitment to this apparent result, but also don't have any strong reason to doubt its authors' conclusions.

The relevant language from the paper itself (in part) is as follows:

200 Extreme regional differentiation in the ancient Near East
201 PCA on present-day West Eurasian populations (Methods) (Extended Data Fig. 1) on which
202 we projected the ancient individuals (Fig. 1b) replicates previous findings of a Europe-Near
203 East contrast along the horizontal Principal Component 1 (PC1) and parallel clines (PC2) in
both Europe and the Near East (Extended Data Fig. 1)7,8,13 204 . Ancient samples from the Levant
205 project at one end of the Near Eastern cline, and ancient samples from Iran at the other. The
two Caucasus Hunter Gatherers (CHG)9 206 are less extreme along PC1 than the Mesolithic and
207 Neolithic individuals from Iran, while individuals from Chalcolithic Anatolia, Iran, and
208 Armenia, and Bronze Age Armenia occupy intermediate positions. Qualitatively, the PCA
209 has the appearance of a quadrangle whose four corners are some of the oldest samples:
210 bottom-left: Western Hunter Gatherers (WHG), top-left: Eastern Hunter Gatherers (EHG),
211 bottom-right: Neolithic Levant and Natufians, top-right: Neolithic Iran. This suggests the
212 hypothesis that diverse ancient West Eurasians can be modelled as mixtures of as few as four streams of ancestry related to these populations, which we confirmed using qpWave7
213
214 (Supplementary Information, section 7).
215 We computed squared allele frequency differentiation between all pairs of ancient West
Eurasians29 216 (Methods; Fig. 3; Extended Data Fig. 3), and found that the populations at the
217 four corners of the quadrangle had differentiation of FST=0.08-0.15, comparable to the value
218 of 0.09-0.13 seen between present-day West Eurasians and East Asians (Han)
219 (Supplementary Data Table 3). In contrast, by the Bronze Age, genetic differentiation
220 between pairs of West Eurasian populations had reached its present-day low levels (Fig. 3):
221 today, FST is ≤0.025 for 95% of the pairs of West Eurasian populations and ≤0.046 for all
222 pairs. These results point to a demographic process that established high differentiation
223 across West Eurasia and then reduced this differentiation over time.

Davidski is right. West Eurasians, whether in Europe or the Near East and whether with or without the Basal Eurasian admixture, have been a distinct modern human group from East Eurasians since more than 40,000 years ago. Looking at all the available modern human ancient genome results or just the results of this analysis of Davidski will show that to be so.

"West Eurasians, whether in Europe or the Near East and whether with or without the Basal Eurasian admixture, have been a distinct modern human group from East Eurasians since more than 40,000 years ago."

Today, the FST between Europeans and East Asians was about 0.100.

Then, the FST between Iranian farmers and Levantine farmers was about 0.100.

This is not inconsistent with West Eurasians being closer to each other than West Eurasians were from East Eurasians. Perhaps the FST between WHG and East Asians at the time was 0.200? Also, FST isn't additive.

You can also have a triangular relationship as well. It is perfectly possible for every combination of Iranian farmers, Levantine farmers and East Asians at a given time to have an FST of 0.100 from each other.

West Eurasians today are not genetically closer to East Eurasians than they were during the Upper Paleolithic, Mesolithic, Neolithic or more recent pre-modern times, because in all these times West Eurasians have been by and large mixing among themselves rather than with other races.