Oldest Pottery Now From China Rather Than Japan

Until recently, the oldest pottery every discovered, dated from 16,500 years ago from the Jomon culture in Japan. But, it has now been outdone by older pottery from Southern China (citing Science News citing the June 29, 2012 edition of the Journal Science - this is not breaking news, just something that caught my attention recently).

In West Eurasia, farming and proto-farming predated the invention (or adoption as the case may be, there is strongly suggestive evidence that pottery is a technology that migrated to West Eurasia across the North Asian steppe) of pottery, so the earliest phases of the Fertile Crescent Neolithic revolution are called "Pre-Pottery Neolithic" or "Pre-Ceramic Neolithic." In the case of the Fertile Crescent Neolithic, carpentry was actually the handmaiden of the Neolithic, while pottery came later (query if wooden containers may have provided models for later ceramic ones). 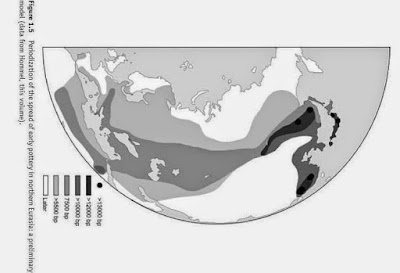 Context for the illustration can be found at the Bell Beaker Blog.


In East Asia, hunter-gatherer populations had pottery before farming was invented. As noted previously at this blog:

Japan was first inhabited by hominins about 30,000 years ago, and about 16,000 years ago, an archaeological culture known as the Jomon arose either due either to new migration or to in situ cultural development of Japan's existing inhabitants. The timing is after the Last Glacial Maximum (LGM), ca. 20,000 years before present, at which Japan was at its most easily accessible in modern human times due to low sea levels, at around the time that the wild fluctuation in climate the followed the LGM started to stabilize somewhat.[10]

The Jomon were fishermen who also hunted and gathered food. The sedentary lifestyle associate with fishing based subsistence allowed the Jomon to become the first culture to develop pottery. . . . There is even suggestive evidence that implies that all pottery in Eurasia is derived from the Jomon invention of that craft.[12]


The upper Paleolithic populations, i.e. Jomon, reached Japan 30,000 years ago from somewhere in Asia when the present Japanese Islands were connected to the continent. The separation of Japanese archipelago from the continent led to a long period (∼13,000 – 2,300 years B.P) of isolation and independent evolution of Jomon. The patterns of intraregional craniofacial diversity in Japan suggest little effect on the genetic structure of the Jomon from long-term gene flow stemming from an outside source during the isolation. The isolation was ended by large-scale influxes of immigrants, known as Yayoi, carrying rice farming technology and metal tools via the Korean Peninsula. The immigration began around 2,300 years B.P. . . .

The timeline in Okinawa is potentially consistent in broad brush strokes with the rest of Japan (the oldest human remains are 32,000 years old), but the archaeological record is thinner (there is no archaeological record indicating a human presence of any kind from 18,000 to 6,000 years ago), rice farming arrives only many centuries after the Yayoi do, and earliest historical mention of Okinawa in surviving written documents is from 607 CE.

In the case of Japan's Jomon culture that made a lot of sense. The Jomon culture subsisted on fishing, which, while not farming and herding since it involves collection of wild animals for food, does allow for a relatively sedentary lifestyle in which spending time to manufacture something too fragile to travel well makes sense. This fit the same pattern as Finland and the vicinity, where a relatively sedentary fishing culture also developed pottery before agriculture. (Notably, flour predates agriculture all over the world, because flour made from wild plants, unlike ceramic pottery, travels well.)

Pottery making got off to an ancient, icy start in East Asia. Pieces of ceramic containers found in a Chinese cave date to between 19,000 and 20,000 years ago, making these finds from the peak of the last ice age the oldest known examples of pottery.

OLDEST POT This pottery fragment and others found near it in a Chinese cave date to 20,000 years ago, making them the oldest known examples of pottery making.

This new discovery suggests that hunter-gatherers in East Asia used pottery for cooking at least 10,000 years before farming appeared in that part of the world, say archaeologist Xiaohong Wu of Peking University in Beijing, China, and her colleagues. Cooking would have increased energy obtained from starchy foods and meat, a big plus in frigid areas with limited food opportunities, the researchers report in the June 29 Science.

It isn't obvious in the South Chinese case what circumstances made it possible for the hunter-gatherers there to stay in the same place for long enough periods of time to make manufacturing these fragile containers worthwhile that wasn't present in the case of other pre-Neolithic people.

Perhaps the conditions of the Last Glacial Maximum confined them to a geographically compact refuge that required them to rely on storing hunted and gathered food, rather than simply moving on during lean periods. It could also be that a shortage of wood in that area made resort to a ceramic alternative, which may have been considered inferior to wood at the time, necessary.

We also don't know if the South Chinese pottery technology is in continuity with later use of pottery in Asia, or if the technology was lost at some point (perhaps in the Mesolithic era when migration became viable again when food supplies were short) only to be reinvented later. The date associated with the South Chinese pottery would not be inconsistent with it being a source for the earliest Jomon pottery in Japan, about 3,500 years later.
Posted 11:36 AM
Email ThisBlogThis!Share to TwitterShare to FacebookShare to Pinterest
Labels: anthropology, China, climate, conjectures, history, Japan, technology