Ancient Harappan DNA is being analyzed right now for publication later this year. Leaks from the lab about the Y-DNA type of these samples (for what reliability one is inclined to give them) are as follows:


Over at Anthrogenica, there's now two members who say they've heard from people associated with the Rakhigarhi investigation that the Rakhigarhi aDNA samples were overwhelmingly L-M20. . . .

"So I don't know if this has been discussed, but I heard from somebody who knows an archeologist at the Rakhigarhi site.

I will inquire for more details. I can't verify the authenticity of the man's claims.". . .

Khanabadoshi's choice of expression has got me confused. Eurogenes had mentioned 12 ancient samples were genotyped from the Rakhigarhi site. Neither 80% nor 90% thereof produce very round figures, at 9.6 to 10.8 ancient persons. Does it imply the remaining 10-20% samples were female, so that all ancient males were L-M20. Or does it mean that oddly all of the samples are exclusively male, with the remaining 1-2 ancient people being some other Y haplogroup? (Since Chad Rohlfsen has said L and R2 above, though it's not clear if the R2 is meant predictively or based on a rumour or leak. Razib Khan had predicted H and L a couple of years back.)

Y-DNA haplogroup L-M20 is reasonably common Y-DNA haplogroup in parts of Pakistan and India where the Harappan civilization once thrived, this is is not a stunning result, although peak frequencies in that region today are only about 25%, and are between 10% and 20% for most of the former Indus River Valley civilization area.  (Of course, there is a very good chance that this is not an "independent random" sample and may include distantly related individuals, which would naturally tend to skew towards one haplogroup being dominant.)

Y-DNA haplogroup R1a is fairly common in the region today and widely attributed to Indo-Aryan invaders, so it shouldn't be found in these samples.

Y-DNA haplogroup R2 is fairly common in Southern and Eastern India as indicated below, and with some notable exceptions is not that strongly tied to the Indus River Valley.

Y-DNA haplogroup H is a leading Y-DNA type in India, widely believed to be autochronous, and showing up in Pakistan as well although with how much antiquity it is hard to know. An absence of Y-DNA haplogroup H would tend to show relative low levels of contact with the southern India, where the Dravidian languages are now spoken.

One of the big questions presented if Y-DNA R2 is absent from the Harappan sample is when R2 made its way into the Indus River Valley gene pool. We think we know from ancient DNA that Y-DNA R, in general has origins somewhere around the Altai. 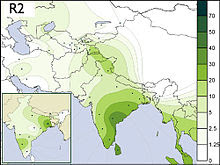 Y-DNA R2 via the Wikipedia link above.

We also have no evidence of Y-DNA R2 on the steppe where numerous ancient Y-DNA samples from Mesolithic times to the present show Y-DNA R1a and R1b, which makes the arrival of Y-DNA R2 with the Indo-Aryans or for that matter even Indo-Iranians, more generally, seem improbable. Indeed, it seems to be common in places where Indo-Aryan genetic influence is lowest.

Yet, the South Asian gene pools seems relatively stable over the last 2500 years or so. And, none of the historic era migrations can account for its presence in any of the historically attested populations that migrated to South Asia.

Y-DNA R2 is a pretty much private South Asian haplogroup. Based upon its distribution and the admittedly unreliable measure of mutation rate dating, it R2 might have emerged in South Asia itself ca. 28,200 years ago, and thus arriving prior to the LGM during the Upper Paleolithic era. The dominant sub-group R2a dates to about 12,000 years ago and the most instances of the basal paragroup R2* by far (6) are in Pakistan, a number that is probably an underestimate due to sampling biases against South Asia and in favor of Europe and Russia.
Posted 1:07 PM
Email ThisBlogThis!Share to TwitterShare to FacebookShare to Pinterest
Labels: conjectures, genetics, history, science, South Asia

I doubt because chauvinism and delusion always prevailed in India.

The latest rumor is publication in January 2018 in Nature. I suspect the delays are due to causes far more mundane than those you suppose.

Another leak via a comment at the Eurogenes blog:

2) I have heard something third hand on the why Rakhigarhi and other studies are being held up. This may not be 100% accurate (or accurate at all), but the issue seems to be that genetic relationships with modern caste groups have been found, and these could exacerbate tensions in Haryana. Allegedly, there is evidence the Jats are non-native to the area, and reflect a variety of migrations from further west and east (Uttar Pradesh dalit-ish women married to Sindhi or Pathan like men). The bigger deal is that two individuals from much poorer burials look like migrants and are related to Dalits. Both could be problematic.

Apparently they want to hold up on results, while they do as much digging and sampling as possible before the angry mobs show up.

Again, I don't know the details, or even how accurate any of this is, but there we go.