I've noted before that Slavic expansion in the historic era dramatically transformed the linguistic landscape of Eastern Europe. As the comments to that post note, this expansion, in addition to spreading the Slavic languages, had a demic component that left a significant genetic trace across Slavic Europe. Indeed, the Slavic expansion was the last last linguistic transformation in Europe of this geographic scale, unless you count the transformation of vernacular Latin into the Romance languages which was taking place contemporaneously. Yet, this story is largely unknown, at least in the West, even to people well educated in history. 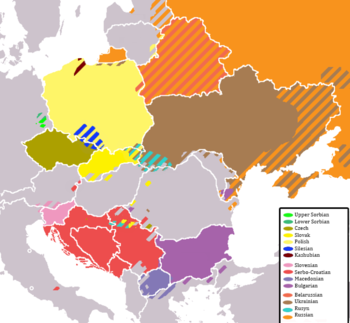 Places where the Modern Slavic languages are spoken, per Wikipedia. Romania, Hungary and Moldova are notable gaps between the northern and southern region of this range. Romanian is a Romance language. Hungarian is a Uralic language adopted following a Magyar conquest ca. 1000 CE that was largely confined to aristocratic elites and did not result in demic replacement.

Where did this begin?

The best available evidence suggests that it originated in the Kiev culture, although the origin of that culture in turn is disputed. The contemporaneous Chernyakhov culture to the South was a mixed Slavic and Gothic culture.

When did this happen?

An expansion from the Kiev culture began the last few centuries before the collapse of the Western Roman Empire in the 5th century. The proximate cause of the Western Roman empire's fall was an invasion of linguistically Eastern Germanic tribes including the Goths, although there is a huge amount of historical debate regarding the deeper causes of its fall. The Slavic expansion had largely run its course sometime in the Middle Ages. 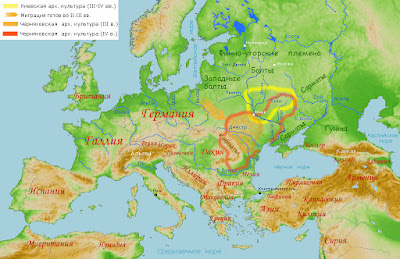 Wikipedia states regarding the Kiev culture:

The Kiev culture is an archaeological culture dating from about the 3rd to 5th centuries, named after Kiev, the capital of Ukraine. It is widely considered to be the first identifiable Slavic archaeological culture. It was contemporaneous to (and located mostly just to the north of) the Chernyakhov culture.

Settlements are found mostly along river banks, frequently either on high cliffs or right by the edge of rivers. The dwellings are overwhelmingly of the semi-subterranean type (common among earlier Celtic and Germanic and later among Slavic cultures), often square (about four by four meters), with an open hearth in a corner. Most villages consist of just a handful of dwellings. There is very little evidence of the division of labor, although in one case a village belonging to the Kiev culture was preparing thin strips of antlers to be further reworked into the well-known Gothic antler combs, in a nearby Chernyakhov culture village.

The descendants of the Kiev culture — the Prague-Korchak, Penkovka and Kolochin cultures — established in the 5th century in Eastern Europe. There is, however, a substantial disagreement in the scientific community over the identity of the Kiev culture's predecessors, with some historians and archaeologists tracing it directly from the Milograd culture, others, from the Chernoles culture (the Scythian farmers of Herodotus) through the Zarubintsy culture, still others through both the Przeworsk culture and the Zarubintsy culture.

Yes, thank you for posting on this and a late happy 2017 from me ;) . Slavs are somewhat discriminated in European history and that is required to be neutralized .