The lion's share of mtDNA haplogroups in Sardinia are private to the island and derived from Neolithic mtDNA haplogroups. But, it took time in the pre-historic period for them to diversify.

What was the Nuragic period named after? According to Wikipedia from the link above:

[N]uraghe, are megalithic towers with a truncated cone shape; they are widespread in the whole of Sardinia, about one nuraghe every three square kilometers. There has long been controversy among scholars. Theories about their utilization have included social, military, religious, astronomical role, as furnaces or sepulture places, but the modern agreement is that they were defensible homesites that included barns and silos. In ancient times, Greek historians and geographers tried to solve the mystery of the nuraghe and their builders. They described the presence of fabulous edifices, called daidaleia, from the name of Daedalus, who, after building his labyrinth in Crete, would have moved to Sicily and then to Sardinia.

In the second half of the 2nd millennium BC, archaeological studies have proved the increasing size of the settlements built around some of these structures, which were often located at the summit of hills. Perhaps for protection reasons, new towers were added to the original ones, connected by walls provided with slits forming a complex nuraghe. 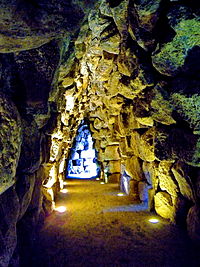 It has been suggested that some of the current Sardinian villages trace their origin directly from Nuragic ones, including perhaps those containing the root Nur-/Nor- in their name (like Nurachi, Nuraminis, Nurri, Nurallao, Noragugume). Among the most famous of the numerous existing nuraghe, are the Su Nuraxi at Barumini, Santu Antine at Torralba, Nuraghe Losa at Abbasanta, Nuraghe Palmavera at Alghero, Nuraghe Genna Maria at Villanovaforru, Nuraghe Seruci at Gonnesa and Arrubiu at Orroli.

Soon Sardinia, a land rich in mines, notably copper and lead, saw the construction of numerous furnaces for the production of alloys which were traded across the Mediterranean basin and nuragic people became skilled metal workers; they were among the main metal producers in Europe and with bronze they produced a wide variety of objects and new weapons as swords, daggers, axes, and after drills, pins, rings, bracelets, typical bronze statuettes, and the votive bronze boats that show a close relationship with the sea.

Tin may have drawn Bronze Age traders from the Aegean where copper is available but tin for bronze-making is scarce; The first verifiable smelting slag has come to light, its appearance in a hoard of ancient tin confirms local smelting as well as casting. The usually cited tin sources and trade in ancient times are those in the Iberian Peninsula or from Cornwall. Markets included civilizations living in regions with poor metal resources, such as the Mycenaean civilization, Cyprus and Crete, as well as the Iberian peninsula, a fact that can explain the cultural similarities between them and the Nuraghe civilization and the presence in Nuragic sites of late Bronze Age Mycenaean, west and central Cretan and Cypriote ceramics, as well as locally made replicas, concentrated in half a dozen findspots that seem to have functioned as "gateway-communities."

The implication is that Sardinia must have been a pretty lawless and violent society (or had credible fears of regular raid attempts from outsiders) in the Nuragic period that made intense fortification of every village and hamlet necessary, centuries before Bronze Age collapse, and after the 4.2 kya climate event that was one of the most intensely arid periods in the West Eurasian region during the Holocene. In other words, they fortified themselves in an in between period that was a period of growth and consolidation of empires in most of the rest of Europe.

The paper and its citation are as follows:

Sardinians are “outliers” in the European genetic landscape and, according to paleogenomic nuclear data, the closest to early European Neolithic farmers. To learn more about their genetic ancestry, we analyzed 3,491 modern and 21 ancient mitogenomes from Sardinia. We observed that 78.4% of modern mitogenomes cluster into 89 haplogroups that most likely arose in situ. For each Sardinian-Specific Haplogroup (SSH), we also identified the upstream node in the phylogeny, from which non-Sardinian mitogenomes radiate. This provided minimum and maximum time estimates for the presence of each SSH on the island. In agreement with demographic evidence, almost all SSHs coalesce in the post-Nuragic, Nuragic and Neolithic-Copper Age periods. For some rare SSHs, however, we could not dismiss the possibility that they might have been on the island prior to the Neolithic, a scenario that would be in agreement with archeological evidence of a Mesolithic occupation of Sardinia.