Archaegenetics is not a reductionist field and the more we know the more intricate the tapestry of human ancestry becomes.


Anatomically modern humans interbred with Neanderthals and with a related archaic population known as Denisovans. Genomes of several Neanderthals and one Denisovan have been sequenced, and these reference genomes have been used to detect introgressed genetic material in present-day human genomes. Segments of introgression also can be detected without use of reference genomes, and doing so can be advantageous for finding introgressed segments that are less closely related to the sequenced archaic genomes.

We apply a new reference-free method for detecting archaic introgression to 5,639 whole-genome sequences from Eurasia and Oceania. We find Denisovan ancestry in populations from East and South Asia and Papuans. Denisovan ancestry comprises two components with differing similarity to the sequenced Altai Denisovan individual. This indicates that at least two distinct instances of Denisovan admixture into modern humans occurred, involving Denisovan populations that had different levels of relatedness to the sequenced Altai Denisovan.

All of these Eurasian and New World populations have a bottom right cluster in the images below that corresponds to Neanderthal ancestry.

The big reveal in this study is that the East Asian individuals, in particular, seem to have two distinct clusters of Denisovan ancestry, with a small secondary top left cluster in each suggesting a second admixture event with genetically diverged Denisovan populations.

Denisovan ancestry is absent, however, in European individuals (top row) and in New World individuals (bottom row except the Papuan). Pontus Skoglund also notes that:

There is an undiscussed but potentially explosive implication of this paper: the 2nd Denisovan gene flow signal in East Asia seems to be absent from Native American ancestry--could Denisovans have survived after the isolation of these lineages <30 kya??

For what it is worth, I don't think that Skoglund's hypothesis is correct. I think it is more likely that the primary Denisovan admixture event reflects admixture of Southern route modern human migrants with Denisovans and that the secondary Denisovan admixture event (which is absent in Papuans) reflects admixture of a subset of Northern route modern human migrants who followed more or less what is now known as the Silk Road, and was distinct from the small founding population of the Americas.

This data point also strengthens the hypothesis that very old, non-Homo erectus hominin remains found in China with a mix of archaic and modern features are either Denisovan or hybrid Denisovan-modern human individuals. 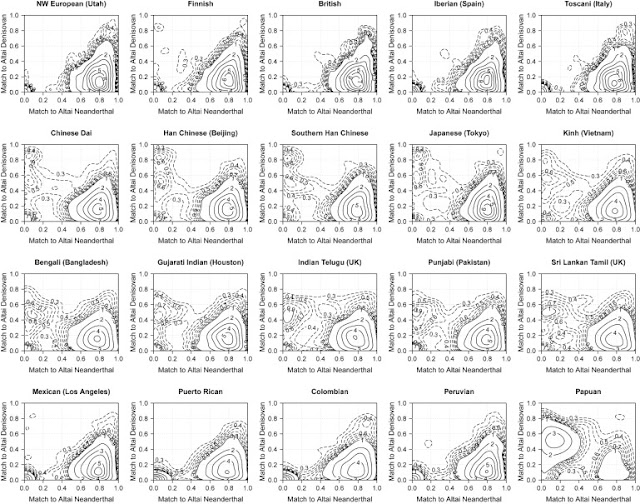 The match proportion is the proportion of putative archaic-specific alleles in a segment that match the given archaic genome, excluding alleles at positions masked in the archaic genome sequence. Segments with at least ten variants not masked in the Neanderthal genome and at least ten variants not masked in the Denisovan genome are included. Numbers inside the plots indicate the height of the density corresponding to each contour line. Contour lines are shown for multiples of 1 (solid lines). In addition, contour lines for multiples of 0.1 between 0.3 and 0.9 (dashed lines) are shown for additional detail. European populations are given in the first row, East Asian populations in the second row, South Asian populations in the third row, and American and SGDP Papuan populations in the final row. Additional information about the populations can be found in Table 1.
Posted 11:04 PM
Email ThisBlogThis!Share to TwitterShare to FacebookShare to Pinterest
Labels: conjectures, Europe, evolution, genetics, history, New World, South Asia, Southeast Asia

Doesn't these results establish a version of multiregionalism vs out of africa?

if h sapiens evolved just once in africa and completely replaced all other relic populations how do you explain admixture?

Instead, we have one main Neanderthal admixture that is basal to all Eurasians on the order of 2%-4% and about 1% of anything else from two different events for many Asians (except Papuans who have more).

Further, most of the big phenotypic regional differences are not due to admixture. Mostly admixture gives rise to invisible traits like immune system tweaks and high altitude adaptations.

And, there is good evidence from Neanderthal admixture that Haldane's law which gives rise to impaired fertility in species hybrids actually did apply.

one prediction of Multiregionalism is that there is no fertility barrier, which is true of H sapiens and neanderthals and denosivans.

if it were possible to directly sequence DNA from H erectus from asia, middle east, africa what would DNA % in Multiregionalism vs out of africa?