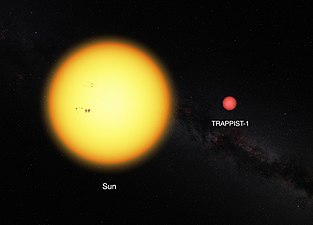 One of the most Earth-like exoplanets yet discovered has been identified, but it is a bit of a hike to visit at 39.6 light years from Earth.


The TRAPPIST-1 system provides an exquisite laboratory for understanding exoplanetary atmospheres and interiors. Their mutual gravitational interactions leads to transit timing variations, from which Grimm et al. (2018) recently measured the planetary masses with precisions ranging from 5% to 12%. Using these masses and the <5% radius measurements on each planet, we apply the method described in Suissa et al. (2018) to infer the minimum and maximum CRF (core radius fraction) of each planet. Further, we modify the maximum limit to account for the fact that a light volatile envelope is excluded for planets b through f. Only planet e is found to have a significant probability of having a non-zero minimum CRF, with a 0.7% false-alarm probability it has no core. Our method further allows us to measure the CRF of planet e to be greater than (49 +/- 7)% but less than (72 +/- 2)%, which is compatible with that of the Earth. TRAPPIST-1e therefore possess a large iron core similar to the Earth, in addition to being Earth-sized and located in the temperature zone.

It is tidally locked, however, which means a light side always faces the star and a dark side is always pointed away from it. This would make it warmer on the light side, but colder on the dark side, potentially making the light side a quite comfortable temperature for humans (perhaps ca. 50 °F).
Posted 10:15 AM
Email ThisBlogThis!Share to TwitterShare to FacebookShare to Pinterest
Labels: astronomy, physics

I attended a nice lecture by a NASA spokesman last night about Mars and solar system exploration. I forgot to ask a question, perhaps of interest here.

I think the Lagrange points describe a stable stationary point between orbiting bodies.
There should be one between Earth and Moon. Is that where the ISS is?

Could a pseudo-moon like that be constructed, starting from a ISS-like core but shielding internal activities from radiation etc. that gradually could be enlarged by continuous layering outwards, keeping an artificial atmosphere at the center with greenhouse.

"Is that where the ISS is?"

"Could a pseudo-moon like that be constructed, starting from a ISS-like core but shielding internal activities from radiation etc. that gradually could be enlarged by continuous layering outwards, keeping an artificial atmosphere at the center with greenhouse."

With enough money, sure. The really expensive part is getting the materials from the surface of the Earth to space. The more raw materials you can get that are already in space, the better, in terms of cost.