* Direct dark matter detection experiments are starting to impose meaningful limitations on dark matter particles sub-GeV masses for particle that interact via the weak force but not the other two Standard Model forces.

Constraints are meaningful down to about 10 MeV. This is heavier than an up quark, a down quark, an electron, or any kind neutrino. But, for example, these results pretty convincingly disfavor weakly interacting dark matter particles with masses comparable to a muon (105.658 MeV), a strange quark (92-104 MeV) (which in any case is never observed outside of a hadron), or the lightest hadron (which is the neutral pion (134.977 MeV)), for which cross-sections of interaction more than 0.01 pb (10^-38 cm^2) are ruled out. 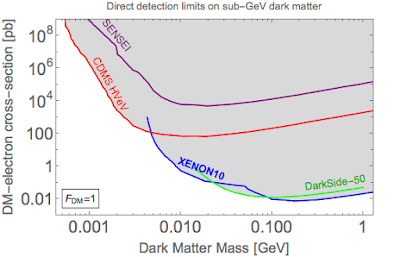 These new direct dark matter detection doesn't impact "warm dark matter" scenarios with typical dark mark particle masses in the keV range or completely sterile dark matter candidates with no non-gravitational interactions. But, it is yet another nail in the coffin of the WIMP paradigm preferred in supersymmetry based dark matter scenarios.

* New direct dark matter search results from the Xenon1T experiment will be announced on Monday, May 28, 2018. In all likelihood, the results will exclude additional dark matter parameter space, because the rumor mill would be buzzing by now if the results would involve an actual claimed direction detection of dark matter.

* A credible argument has been made to slightly relax on of the empirical constraints on primordial black hole dark matter, by opening up more free parameters in the models considered, but only modestly.

* New empirical constraints have been placed on self-interacting sterile neutrinos.

* A new way to empirically test dark matter proposals by looking at the character of "stellar streams" around galaxies has been proposed. The theoretically predicted properties of stellar streams under various dark matter hypotheses have been determined, so now astronomers can can compare what is observed to these predictions, something that will be possible to observed with "next generation telescopes", so this is something today's graduate students and currently practicing astrophysicists will see in the medium term future. In general, heavier dark matter particles imply more clumping, more collisions, more gaps in the stream, and a concentration of stars closer to the center of the streams than lighter dark matter particles.

So far as I know, comparable predictions have not been made for theories like MOND in this system which is well within its domain of applicability but very much complicated by external field effects in these systems (which when present, tend to cause the system to behave closer to a Newtonian gravity model with no dark matter).

* Massive gravity is also pretty much dead due to new experimental constraints, after being revived due to a loophole that overcame earlier problems identified with it.

Massive gravity is interesting because it makes careful analysis of graviton self-interactions absolutely necessary in a way that is often glossed over in massless graviton theories, which is useful because while gravitons lack mass, they do not lack mass-energy. But, the predictions of massive gravity theories are wrong even in the limit as graviton mass approaches zero.

While not exactly on the point, one interesting recent paper that doesn't naturally fit in any neat box expresses the quantum chromodynamics a.k.a. QCD a.k.a. the Standard Model description of the strong force in an equation form closely analogous to the equations of general relativity. Usually, quantum gravity researchers go in the opposite direction and try to find formulas analogous to those of the other Standard Model forces for general relativity.
Posted 9:29 AM
Email ThisBlogThis!Share to TwitterShare to FacebookShare to Pinterest
Labels: astronomy, dark matter, experimental BSM data, neutrinos, physics, QCD, Standard Model physics

primordial black hole dark matter, can that explain the third peak in the CMB?

what do you think of MOND + primordial black hole dark matter, only extending the SM to include neutrino masses

I don't think that primordial black holes make a meaningful contribution to the dark matter budget. I think MOND is a quantum gravity effect caused by the self-interaction term of gravitons that if modeled corrected can surrender its free parameter and account for both dark matter and dark energy phenomena.

what is your fav candidate for dark matter budget ?

Lee Smolin cowrote a followup paper, though he suggests a dark matter particle plus MOND

The Equivalence Principle and the Emergence of Flat Rotation Curves https://arxiv.org/abs/1804.09573

Dark matter particles elude scientists in the biggest search of its kind
Science News-7 hours ago
Known as XENON1T, the experiment is designed to detect elusive dark matter particles, which are thought to make up most of the matter in the ...

Somewhat random question but... is there any reason for a potential dark matter particle not to be able to have spin 1/2? And if so what role would degeneracy pressure play?

Degeneracy pressure, or at any rate, a comparable mechanism, is one of the means by which fermionic weak dark matter proposals avoid some of the small scale (i.e. galaxy and sub-galaxy scale) structure problems associated with cold dark matter theories.

@neo Of course, I predicted as much (simply due to the lack of rumors about a more interesting result).

Is WIMP based on the WIMP miracle still viable at this point?

i recall stacy mcgaugh saying in 2014 its strongly disfavored

@neo That kind of WIMP is almost certainly ruled out by multiple lines of evidence including lack of direct detection, lack of candidates in colliders, available particle masses for candidates that are too heavy, lack of annihilation signals, and no indications of "just around the corner" in global measures of deviation from the SM (e.g. muon g-2, rare hadron decay frequencies, proton weak charge, Higgs boson decay rates, etc.).

Oops: "Degeneracy pressure, or at any rate, a comparable mechanism, is one of the means by which fermionic WARM dark matter proposals avoid some of the small scale (i.e. galaxy and sub-galaxy scale) structure problems associated with cold dark matter theories."