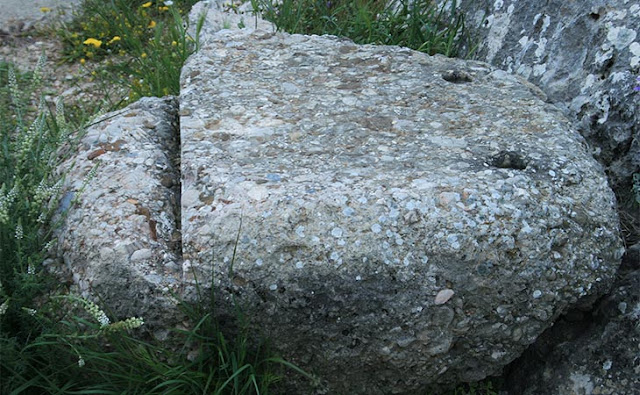 A stone discarded near a Bronze Age palace, midway through the process of being cut
provided important clues about how the finished cut stones were made.

Experimental archaeology combined with close observation of the cuts made and debris abandoned partially cut suggest that long straight edged metal blades, either in a pendulum saw configuration or a two man, two handled saw similar to one used by loggers was used, as explained in a Science News article. Abrasive sand, from the Greek island of Naxos, and water were also probably placed in the cuts to lubricate the blades and increase their cutting power.

A pendulum blade would offer more power to cut through hard rock and help explain the near circular curvature of many of the larger cuts. But, the logger's saw configuration would have made it easier to cut stone at multiple precise angles and has an archaeological precedent in double-handled loggers’ saws excavated from sites from the Late Bronze Age Minoan society on Crete that could have been adapted to cut stone. 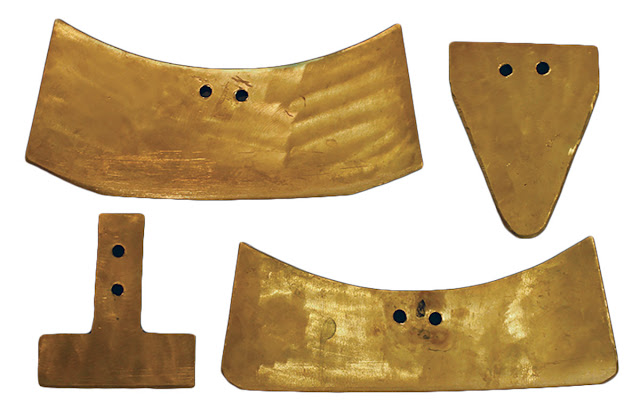 Experimentation revealed that the Bronze blade used must have resembled
the modern recreation on the bottom right of this image.

The Science News article was:

* J. Wright, "The formation of the Mycenaean palace. In Ancient Greece: From the Mycenaean Palaces to the Age of Homer", eds. S. Deger-Jalkotzy and I. Lemos, 3 Edinburgh Leventis Studies 7-52, Edinburgh University Press (2006).
Posted 11:08 AM
Email ThisBlogThis!Share to TwitterShare to FacebookShare to Pinterest
Labels: Europe, history, technology