Razib Khan notes that in his small sample (N=12) the typical modern South African white person has about 6.5% non-European ancestry. This is consistent with other data which also suggests that the non-European contribution was predominantly female (i.e. European men had children with non-European women).

Traditional genealogical estimates suggested in the range of 5-7.5% non-European ancestry in Afrikaners, and one study of 185 individuals showed 18% non-European mtDNA. 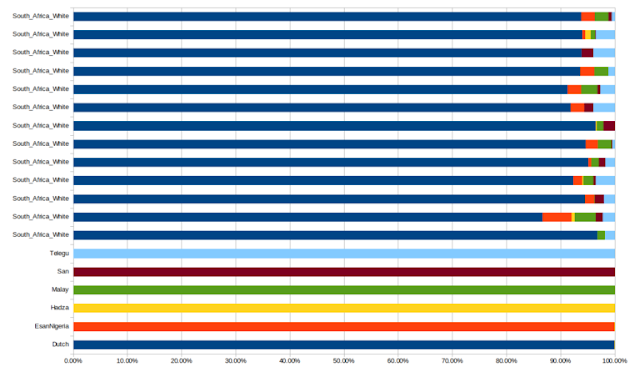 He concludes (very plausibly) based upon this data that:

The genetic data suggest a time of admixture that is probably well before the mid-1800s, as greater time depth is necessary to develop multiple kinds of admixture at small percentages each. This fits with the observation that the Dutch were the primary colonial power in South Africa from 1652 to 1806, and that admixture tends to be most common in the earlier days of outside settlement when there has been less mass migration of women from a colonist's homeland than there has been mass migration of colonist men.

The also confirms that South African whites, also known as Afrikaners, really do indeed have continuous descent from African born Afrikaner ancestors have European immigrant ancestors who arrived in Southern Africa as far back (or farther back) to their non-European home than almost all North American whites, most Latin Americans with European ancestry, and all whites in Australian and New Zealand with European ancestry.

Indeed, Afrikaners were present in South Africa, for example, before the Miami Indian tribe (which migrated to Southeast Ohio from what is now Wisconsin) arrived in Ohio's Miami River Valley area. (The Miami Indians were then forcibly relocated to Oklahoma in the early 1800s).
Posted 6:06 PM
Email ThisBlogThis!Share to TwitterShare to FacebookShare to Pinterest
Labels: Africa, Europe, genetics, history, New World, race, South Asia, Southeast Asia