The Run-2 data from ATLAS pulls the world average down from the 125.09 GeV average from ATLAS and CMS combined based on Run-1 data alone, mostly because the Run-2 diphoton decay channel measurement at ATLAS was significantly lower than the previous measurement. 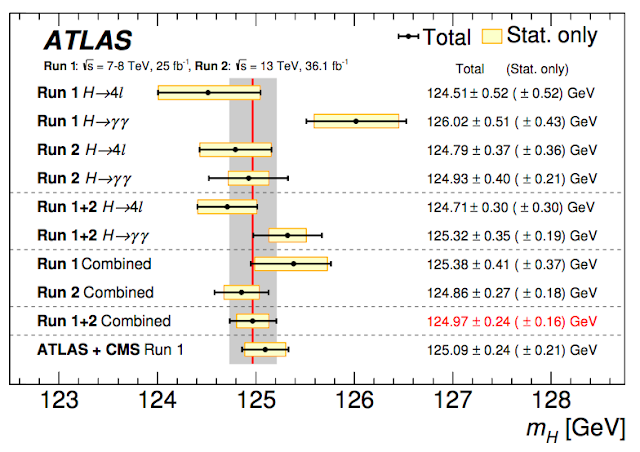 From here (this is actually old news).

A Higgs boson mass of 124.65 GeV, which is notable because it would be the mass at which half of the Higgs vev squared is equal to the sum of the square of the masses of the fundamental Standard Model bosons, is still a value barely consistent with the Run-2 data to date within two sigma.
Posted 12:27 PM
Email ThisBlogThis!Share to TwitterShare to FacebookShare to Pinterest
Labels: Higgs boson, physics, Standard Model physics

"A Higgs boson mass of 124.65 GeV, which is notable because it would be the mass at which half of the Higgs vev squared is equal to the sum of the square of the masses of the fundamental Standard Model bosons"

is there any physics theories that this is important?

The first published discussion of the relationship of which I am aware is in a paper by Lopez Castro and Pestieau (two people, not three).

If the conjecture is true, it would suggest strong that the fundamental particle set of the SM is complete (at the very least on the boson side), would explain the overall scale of the SM particle masses, would reduce by two the number of fundamental constants, and would predict the top quark mass more precisely than it can be measured.

Seen in a context where the overall mass scale is set by the Higgs vev, the Koide relation and other relationships between particle masses go only to the relative and not absolute values of the particle masses.

such a result does not sound consistent with SUSY which doubles the particle content. yet theorists believe in SUSY.

btw i just saw this paper, below,
can Deur's work reproduce the radial acceleration relation?

this paper and a previous one you posted shows conformal gravity can reproduce both MOND and rar. i suspect that CMB is the result of something like neutron stars or micro black holes, and that MOND/conformal gravity explains galaxy rotations. no need to enlarge the particle content of the SM, except neutrino masses.

During the 2016 International Workshop on Astronomy and Relativistic Astrophysics (IWARA), the question was raised as to if conformal gravity could explain the timely result of McGaugh et. al. 2016 which showed a universal nature found in the centripetal accelerations of spiral galaxies. At the time of the conference, the McGaugh result was only published for two weeks. Since then, the result has become known as the Radial Acceleration Relation (RAR) and has been considered tantamount to a natural law. In this work, we summarize how conformal gravity can explain the Radial Acceleration Rule in a fashion consistent with the findings of the original authors without the need for dark matter.

"such a result does not sound consistent with SUSY which doubles the particle content. yet theorists believe in SUSY."

SUSY is a failed and sinking ship.

Yes. Also I saw this paper and if I haven't blogged about it already, I plan to. I think that I did blog it however.