Another Dark Matter-Less Galaxy (NGC1052-DF4) Is It Proof Of MOND?

This paper replicates the result seen in a sister galaxy. MOND explains this with the "External Field Effect" something absent from conventional General Relativity.

A second galaxy missing dark matter in the NGC1052 group

The ultra-diffuse galaxy NGC1052-DF2 has a very low velocity dispersion, indicating that it has little or no dark matter. Here we report the discovery of a second galaxy in this class, residing in the same group. NGC1052-DF4 closely resembles NGC1052-DF2 in terms of its size, surface brightness, and morphology; has a similar distance of  Mpc; and has a similar population of luminous globular clusters extending out to 7 kpc from the center of the galaxy. Accurate radial velocities of seven clusters were obtained with the Low Resolution Imaging Spectrograph on the Keck I telescope. Their median velocity is  km/s, close to the central velocity of 22 galaxies in the NGC1052 group. The rms spread of the observed velocities is very small at  km/s. Taking observational uncertainties into account we determine an intrinsic velocity dispersion of  km/s, consistent with the expected value from the stars alone ( km/s) and lower than expected from a standard NFW halo ( km/s). We conclude that NGC1052-DF2 is not an isolated case but that a class of such objects exists. The origin of these large, faint galaxies with an excess of luminous globular clusters and an apparent lack of dark matter is, at present, not understood.


@DanieliShany and I found a twin of NGC1052-DF2, with the same weird population of globular clusters and super low velocity dispersion. Meet NGC1052-DF4! https://arxiv.org/pdf/1901.05973v1.pdf … What the paper can't convey is how incredibly surprised we were!

He also tweeted this image of the system (which naively makes it look further from NGC 1052 but closer to NGC 1035), but it is hard to discern distances between objects since depth is not known with that precision. 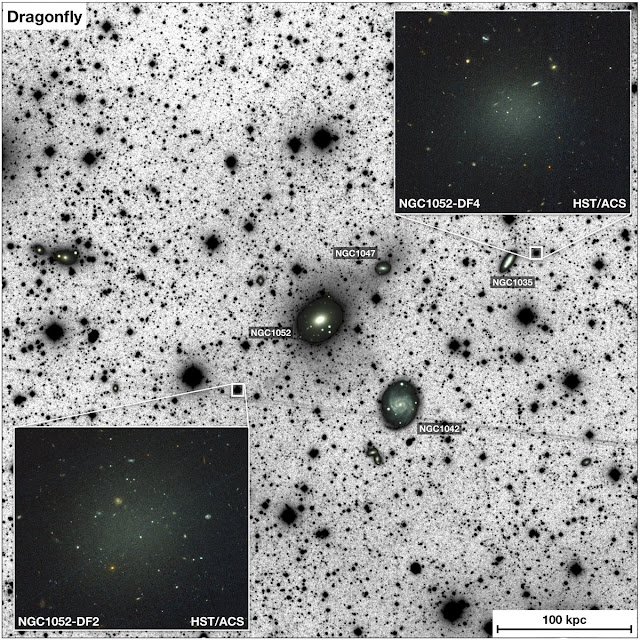 A previous posts on point can be found here and here. The authors explain in the introduction the implication of these results for the dark matter paradigm:


With this confirmation, the central unanswered question is whether NGC1052-DF2 is an isolated case or representative of a population of similar galaxies. This is important for judging the likelihood of interpretations that require unusual orbits or viewing angles (see, e.g., Ogiya 2018) and, most importantly, for judging the relevance of NGC1052-DF2 for our ideas about galaxy formation and the relation between dark matter and normal matter. With the important exception of tidal dwarfs (Bournaud et al. 2007; Gentile et al. 2007; Lelli et al. 2015), it is thought that a gravitationally-dominant dark matter halo is the sine qua non for the formation of a galaxy. If galaxies such as NGC1052-DF2 are fairly common we may have to revise our concept of what a galaxy is, and come up with alternative pathways for creating galaxy-mass stellar systems. Here we report the discovery of a galaxy that shares essentially all of NGC1052-DF2’s unusual properties, to a remarkable degree. It is in the same group, has a similar size, luminosity, and color, the same morphology, the same population of luminous globular clusters, and the same extremely low velocity dispersion.

In contrast, MOND understands why this is happening and predicted this result before "The Breakfast Club" was in theaters in the early 1980s.


There have actually been a lot of interesting papers about gravity and dark matter in the past little while, but given ill health I'll also simply note this one without much comment or formatting. It affirms and refines the data supporting some kind of modified gravity hypothesis.

We study the baryonic Tully-Fisher relation (BTFR) at z=0 using 153 galaxies from the SPARC sample. We consider different definitions of the characteristic velocity from HI and H-alpha rotation curves, as well as HI line-widths from single-dish observations. We reach the following results: (1) The tightest BTFR is given by the mean velocity along the flat part of the rotation curve. The orthogonal intrinsic scatter is extremely small (6%) and the best-fit slope is 3.85+/-0.09, but systematic uncertainties may drive the slope from 3.5 to 4.0. Other velocity definitions lead to BTFRs with systematically higher scatters and shallower slopes. (2) We provide statistical relations to infer the flat rotation velocity from HI line-widths or less extended rotation curves (like H-alpha and CO data). These can be useful to study the BTFR from large HI surveys or the BTFR at high redshifts. (3) The BTFR is more fundamental than the relation between angular momentum and galaxy mass (the Fall relation). The Fall relation has about 7 times more scatter than the BTFR, which is merely driven by the scatter in the mass-size relation of galaxies. The BTFR is already the "fundamental plane" of galaxy discs: no value is added with a radial variable as a third parameter.

It turns out that there are actually quite a few ways that you can tweak gravity to produce this result. This kind of detail helps to discriminate between them. The chart below is a screenshot from the paper capturing its central conclusion: 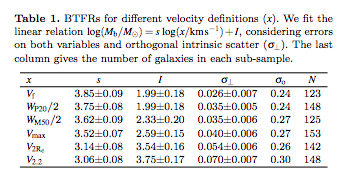 " NGC1052-DF2’s unusual properties, to a remarkable degree. It is in the same group, has a similar size, luminosity, and color, the same morphology, the same population of luminous globular clusters, and the same extremely low velocity dispersion.

In contrast, MOND understands why this is happening and predicted this result before "The Breakfast Club" was in theaters in the early 1980s."

MOND as a modification of gravity or inertia, should have same intrinsic velocity dispersion as the laws are always working.

"in MOND you'd expect it to be the same as in a dark matter galaxy."

No. This isn't how the external field effect works. You assertion is only true for galaxies that are no within moderately strong external fields.

are there any papers that show NGC1052-DF2 and NGC1052-DF4 are best explained as external field effect rather than the absence of dark matter, which is what the paper's authors say?

I am certain that there are other possible theories that could explain the phenomena that are observed that I am not familiar with and link to a paper that suggests a scenario in which low DM dwarf galaxies are much more common.

The field of DM and modified gravity is not so mature that "best explained" is a good question to ask. It is better to ask which theories are and are not consistent with a particular datum.

"e determine an intrinsic velocity dispersion of σintr=4.2+4.4−2.2 km/s, consistent with the expected value from the stars alone (σstars≈7 km/s) "

"The dwarf galaxy NGC1052-DF2 has recently been identified as potentially lacking dark matter. If correct, this could be a challenge for MOND, which predicts that low surface brightness galaxies should evince large mass discrepancies. However, the correct prediction of MOND depends on both the internal field of the dwarf and the external field caused by its proximity to the giant elliptical NGC1052. Taking both into consideration under plausible assumptions, we find σMOND=13.4+4.8−3.7kms−1. This is only marginally higher than the claimed 90\% upper limit on the velocity dispersion (σ<10.5kms−1), and compares well with the observed root mean square velocity dispersion (σ=14.3kms−1)"

it lowers velocity dispersion but it is still higher than baryon only.

so the galaxy even accounting for EFE is still too high, and it apparently is a baryon only, no MOND no EFE, no dark matter just newtonian,

@neo The margins of error in these measurements is quite high including a lot of hard to estimate systemic error. The central values can't be taken too seriously.

Thanks a lot for the tip. I appreciate it.