We assembled genome-wide data from 271 ancient Iberians, of whom 176 are from the largely unsampled period after 2000 BCE, thereby providing a high-resolution time transect of the Iberian Peninsula. We document high genetic substructure between northwestern and southeastern hunter-gatherers before the spread of farming. We reveal sporadic contacts between Iberia and North Africa by ~2500 BCE and, by ~2000 BCE, the replacement of 40% of Iberia’s ancestry and nearly 100% of its Y-chromosomes by people with Steppe ancestry. We show that, in the Iron Age, Steppe ancestry had spread not only into Indo-European–speaking regions but also into non-Indo-European–speaking ones, and we reveal that present-day Basques are best described as a typical Iron Age population without the admixture events that later affected the rest of Iberia. Additionally, we document how, beginning at least in the Roman period, the ancestry of the peninsula was transformed by gene flow from North Africa and the eastern Mediterranean.

New York Times summary here. One of many notable points it makes: "Before the Roman era, the Basque had DNA that was indistinguishable from that of other Iron Age Iberians. But Roman genes did not flow into Basque Country." 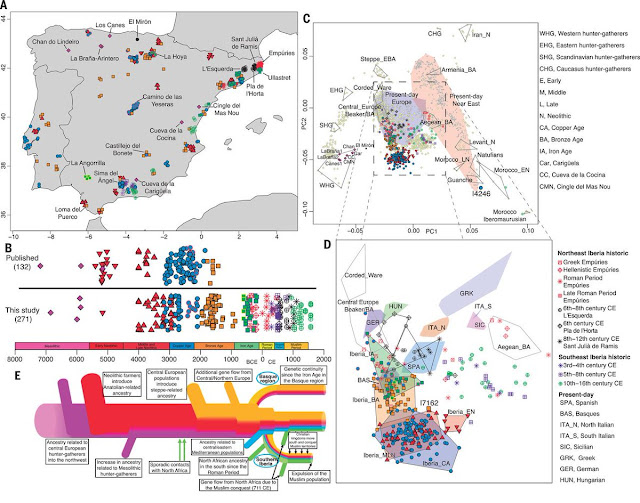 The immense demographic upheaval in the British Isles and Western Europe associated with the Bell Beaker people strongly suggests that there was a language shift at the time of their arrival from what was presumably a language derived, at least remotely, from the language of the Neolithic Anatolians that was presumably spoken by the First Farmers of Europe.

I haven't yet read the body text or supplemental materials and may update this post when (and if) I do.
Posted 2:33 PM
Email ThisBlogThis!Share to TwitterShare to FacebookShare to Pinterest
Labels: anthropology, Europe, genetics, history, language

If Basque is a Cardial Farmer language, then that's a pretty impressive feat of cultural assimilation. Basque people are what, 2% E1b? Possible though - it's not like England has a huge amount of Germanic R1a and I1 after all.

If Basque is a farmer language I think it's more plausible that it's from the Danubian Neolithic as Maju has suggested for a while, and that it spread into Iberia with the Bell Beakers. That would mean R1b-M269 wasn't really a steppe marker originally though.

"If Basque is a farmer language I think it's more plausible that it's from the Danubian Neolithic as Maju has suggested for a while, and that it spread into Iberia with the Bell Beakers. "

I am agnostic over the correct narrative, but I think that if Basque is EEF the narrative runs roughly like this:

1. Steppe pre-BB have relatively advanced metallurgy and learn of stunningly great tin supplies in Tartessia via Mediterranean trade routes. (FWIW, I think Tartessia is the best candidate for Atlantis too.)
2. There is a small, first wave of Steppe pre-BB men who migrate to Tartessia (which is the archaeolgical epicenter of BB culture. They integrate into a quite advanced local culture, marry local women and rise to the top based upon their skills and culture, adopting their wives' EEF languages in a 95% non-BB society. Their skills and cultural influence transforms and revitalizes local culture. (Compare the Eastern Roman Empire where the Roman invaders began to speak Greek.)
3. Chain migration from the steppe follows and the new BB synthesis spread culturally to both new migrants who are integrated into pre-Basque culture (a hybrid of EEF and steppe pre-BB), and those who are not, outside Iberia.
4. The ongoing steppe migration leads to a war-like world with lots of fortresses arising in Portugal and the less advanced non-BB influenced locals being wiped out first, while the BB lineages dominate in the hybrid culture.
5. BB derived cultures go from Portugal to France and then eventually circle back to modern Basque country.
6. At the time of Bronze Age collapse, the BB derived cultures collapse in the face of Urnfield and later IE migration, but this is hard to see genetically because the conquerers and the conquered are genetically similar and the change is mostly due to elite dominance and not mass migration, wiping out Vasconic areas linguistically in many places.

OTOH, I think that a multi-lingual steppe with a basically Northern IE and a basically Southern pre-BB is plausible since the R1a v. R1b sorting is strong enough geographically to suggest an invisible language divide keeping them from seeping into each other more with the pre-BB, non-IE folk eventually collapsing in the steppe in the face of a CWC derived invasion that makes R1b disappear from the region. If so, Basque is a distant relative of some Caucasian language.

I definitely think a multilingual steppe is the most plausible (look at Mesopotamia/the Levant with the expansion of agriculture).

If you think M269 must be non-steppe though, do you consider the area around Carpathian foothills steppe or non-steppe?

"If you think M269 must be non-steppe though, do you consider the area around Carpathian foothills steppe or non-steppe?"

I must not have been clear. I am pretty much 100% certain that M269 has steppe origins.

And where are the boundaries of the steppe in your view? Some consider Pannonia part of the Eurasian steppe.