This is completely consistent with the paradigm, but paradigm confirming research has its place too.

The nuances are also notable. Mesolithic Europeans arose from populations that overlapped with those of the first farmers of the Fertile Crescent. And, in Anatolia, at least, Iranian/Caucasian first farmers predated Levantine first farmers. 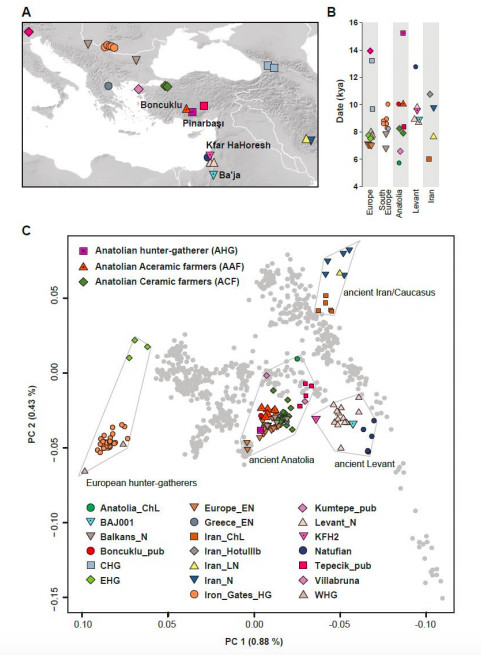 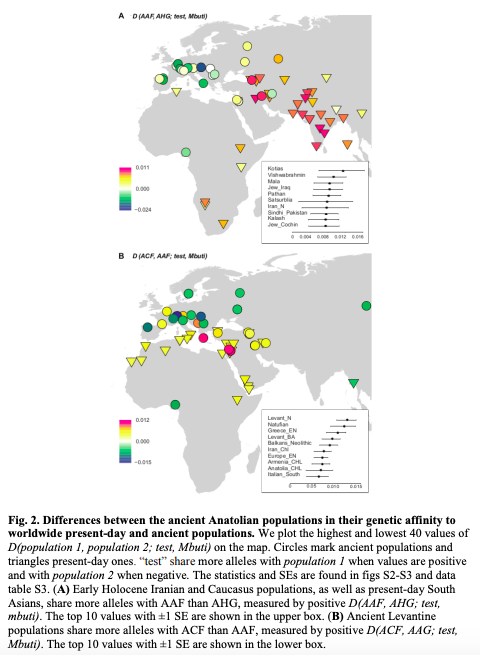 Anatolia was home to some of the earliest farming communities. It has been long debated whether a migration of farming groups introduced agriculture to central Anatolia. Here, we report the first genome-wide data from a 15,000 year-old Anatolian hunter-gatherer and from seven Anatolian and Levantine early farmers. We find high genetic continuity between the hunter-gatherer and early farmers of Anatolia and detect two distinct incoming ancestries: an early Iranian/Caucasus related one and a later one linked to the ancient Levant. Finally, we observe a genetic link between southern Europe and the Near East predating 15,000 years ago that extends to central Europe during the post-last-glacial maximum period. Our results suggest a limited role of human migration in the emergence of agriculture in central Anatolia.

Thanks for sharing. I guess Anatolia is example of agriculture spread without migration. How was dynamic of spread of agriculture within Middle East different than into Europe? I'd be interested to hear archeaologist has to say.

Another interesting thing, is Anatolians didn't just go to Europe. They also went to the Caucasus. And we see Anatolian admixture in Neolithic Levant. I wonder what this means.

We're still missing Eastern Anatolia and all of Mesopotamia, as well as the Levant north of Sidon. My suspicion is that the paradigm's not done yet.