Two large samples were used to analyze modern French population genetics in a recent preprint. The core results are as follows (references omitted, style altered to reflect American style conventions in some instances, and omissions of details made as indicated, images from the paper): 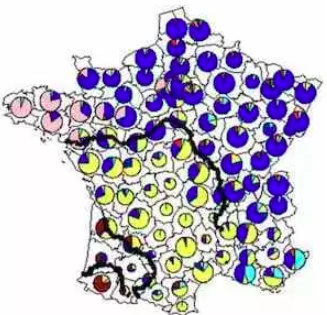 Pie charts indicating the proportion of individuals from the different “départements” assigned to each cluster. Results are reported for the partition in 6 clusters obtained by running FineSTRUCTURE. Geographic coordinates of three rivers of France are drawn in black: Loire, Garonne and Adour from north to south. 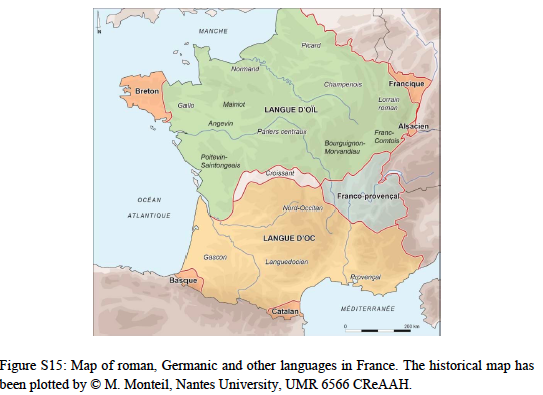 An important division separates Northern from Southern France. It may coincide with the von Wartburg line, which divides France into “Langue d’Oïl” part (influenced by Germanic speaking) and “Langue d’Oc” part (closer to Roman speaking). This border has changed through centuries and our North-South limit is close to the limit as it was estimated in the IXth century. This border also follows the Loire River, which has long been a political and cultural border between kingdoms/counties in the North and in the South. Regions with strong cultural particularities tend to separate. This is for example the case for Aquitaine in the South-West which duchy has long represented a civilization on its own. The Brittany region is also detected as a separate entity in both datasets. This could be explained both by its position at the end of the continent where it forms a peninsula and, by its history since Brittany has been an independent political entity (Kingdom and, later, duchy of Bretagne), with stable borders, for a long time.

Thus, in a nutshell, Northern France is more Germanic, Brittany is more Celtic, the far southwest corner of France looks Basque. the core of "yellow" component France in modern populations shown in the study result map above correspond to the historic Kingdom of Aquitaine. The population segment in the Southeast of France above is very similar to the Tuscan population of Italy sample in the 1000 Genomes Project study.

The demographic impact of the Black Plague on French population genetics is apparent and the highlands were less hard hit by the plague than the lowlands were.
Posted 4:33 PM
Email ThisBlogThis!Share to TwitterShare to FacebookShare to Pinterest
Labels: Europe, genetics, history