The Standard Model Physical Constants And Their Running With Energy Scale

I am a firm believer in firmly establishing the basics of what is known, and not just new discoveries and theoretical speculation. In that regard, it is helpful to pin down the working values of the experimentally measured parameters of the Standard Model of Particle Physics and how they run with energy scale, in a theoretically consistent manner that relies upon the latest experimental data collected by the Particle Data Group.

The paper does omit the four parameters of the CKM matrix, the four parameters of the PMNS matrix, and the three neutrino masses, as well as a number of physical constants that are used by particle physicists but do not run with energy scale such as "c" (the speed of light) and "h" (Planck's constant). It also omits to two physical constants of the other part of the Core Theories of Physics, General Relativity, which are "G" (Newton's constant) and the lambda which is the cosmological constant.

The raw numbers are unsurprising. The details are below the fold. A few observations about the running of these parameters (consistent with a 2008 paper along the same lines):

* The runnings of the experimentally measured fundamental constants in the Standard Model approximately logarithmically proportional to energy scale.

* The electromagnetic coupling constant gets significantly stronger at higher energies.

* Gauge coupling unification does not take place in the Standard Model at high energies, although the relevant beta functions would be modified somewhat if quantum gravity were considered in addition to the Standard Model force and particles. It would take a tweak in the strength of those coupling constants on the order of a low single digit percent at energies seven or more orders of magnitude greater than existing experimental observations in one or more of them, to lead to gauge coupling unification.

* Quarks get slightly and proportionately less massive at higher energies; the relative masses of the quarks changes very little with energy scale.

* The mass of the Higgs boson (who analog to fermion Yukawas is confusingly also called "lambda") approaches zero at high energies, although the point at which it does so is obscured by experimental uncertainty.

* The paper does not have a nice clean illustration showing the running of the W and Z boson masses with energy scale (neither does the 2008 paper linked above).

We present an implementation and numerical study of the Standard Model couplings, masses, and vacuum expectation value (VEV), using the pure  renormalization scheme based on dimensional regularization. Here, the  Lagrangian parameters are treated as the fundamental inputs, and the VEV is defined as the minimum of the Landau gauge effective potential, so that tadpole diagrams vanish, resulting in improved convergence of perturbation theory. State-of-the-art calculations relating the  inputs to on-shell observables are implemented in a consistent way within a public computer code library, SMDR (Standard Model in Dimensional Regularization), which can be run interactively or called by other programs. Included here for the first time are the full 2-loop contributions to the Fermi constant within this scheme and studies of the minimization condition for the VEV at 3-loop order with 4-loop QCD effects. We also implement, and study the scale dependence of, all known multi-loop contributions to the physical masses of the Higgs boson, the W and Z bosons, and the top quark, the fine structure constant and weak mixing angle, and the renormalization group equations and threshold matching relations for the gauge couplings, fermion masses, and Yukawa couplings.

The pre-print above determines the values of the experimentally measured parameters of the Standard Model of Particle Physics in the most commonly used renormalization scheme and illustrates how they run with energy scale.

Some of these constants are shown to spurious accuracy in the paper to insure that anyone trying to replicate their results can do so.

Some of the key figures from the paper are shown below.

First the numerical values of the parameters. 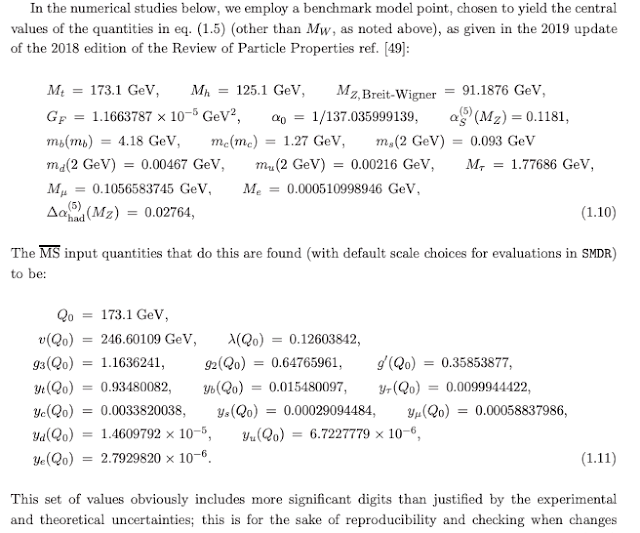 Then, the running of many of those parameters with energy scale up to the GUT scale. 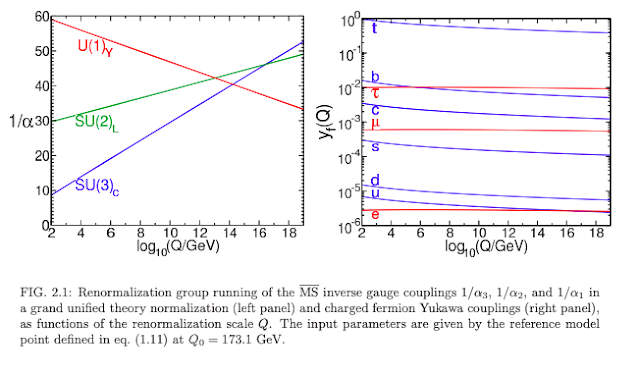 Then, the running of a Higgs boson self-coupling (with is directly proportional to the Higgs boson mass) with energy scale up to the GUT scale. 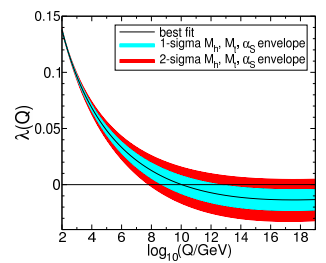