Western Persia In the Upper Paleolithic 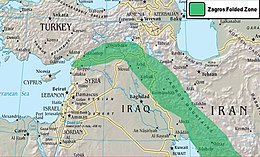 The geological feature that includes Zargos Mountains is shown in green.

After some modern humans migrated out of Africa, the next step was for some of them to migrate beyond Arabia.

The earliest Middle Paleolithic residents of Persia were probably a mix of a very early wave of modern human migration that didn't leave all that much of a trace, and Neanderthals, who were in Persia at least a hundred thousand years before there were any modern humans there.

In the Upper Paleolithic era, about 40,000 years ago, at about the same time that modern humans first made their way into Europe, hunter-gatherers from the Mesopotamia migrated to the Zagros mountains which divide Mesopotamia to the west from Persia to the east. This migration gave rise to the second of many sequential founder effects as modern humans expanded, which was preceded by the Out of Africa founder effect.

These new Upper Paleolithic hunter-gatherers from Mesopotamia settled into their local environments and had only limited contact with each other. This caused three distinct cultures to develop in these mountains. These three cultures were later homogenized as they started to have more contact with each other tens of thousands of years later in the later phased of the Upper Paleolithic era (but before the Holocene era which began ca. 10,000 years ago).

Some of these Upper Paleolithic distinct cultures fizzled out leaving no discernible survivors. continued their migration leaving no self-sustaining population behind; some of their descendants gave rise to many additional serial founder effects as they moved further east into Asia.

But, other descendants of these Upper Paleolithic migrants were probably the source for the genetic cluster of ancestry known as Caucasian Hunter-Gathers, from which Caucasian farmers emerged in situ in the eastern part of the Fertile Crescent Neolithic Revolution as a genetically distinct half of the earliest of the Neolithic revolutions (the other half was made up of Levantine Fertile Crescent farmers who emerged in situ from hunter-gatherers in the Levant).

This paper aims to understand the cultural diversity among the first modern human populations in the Iranian Zagros and the implications of this diversity for evolutionary and ecological models of human dispersal through Eurasia.

We use quantitative data and technotypological attributes combined with physiogeographic information to assess if the Zagros Upper Paleolithic (UP) developed locally from the Middle Paleolithic (MP), as well as to contextualize the variation in lithics from four UP sites of Warwasi, Yafteh, Pasangar, and Ghār-e Boof. Our results demonstrate (1) that the Zagros UP industries are intrusive to the region, and (2) that there is significant cultural diversity in the early UP across different Zagros habitat areas, and that this diversity clusters in at least three groups.

We interpret this variation as parallel developments after the initial occupation of the region shaped by the relative geotopographical isolation of different areas of the Zagros, which would have favored different ecological adaptations. The greater similarity of lithic traditions and modes of production observed in the later phases of the UP across all sites indicates a marked increase in inter-group contact throughout the West-Central Zagros mountain chain. Based on the chronological and geographical patterns of Zagros UP variability, we propose a model of an initial colonization phase leading to the emergence of distinct local traditions, followed by a long phase of limited contact among these first UP groups. This has important implications for the origins of biological and cultural diversity in the early phases of modern human colonization of Eurasia. We suggest that the mountainous arc that extends from Anatolia to the Southern Zagros preserves the archaeological record of different population trajectories. Among them, by 40 ka, some would have been transient, whereas others would have left no living descendants. However, some would have led to longer term local traditions, including groups who share ancestry with modern Europeans and modern East/Southeast Asians.