I'll comment more if I have time, but the headline points out what I think is the most notable point. This kind of Y-DNA diversity doesn't happen overnight. It takes generations. This points to a diversity of ancestry among discrete groups of "barbarians" in Europe that is greater than usually appreciated and a more cosmopolitan culture among these groups than is often appreciated.

Also, while the Hungarian example is usually considered an extreme counterexample of demic diffusion of language, with language shift secured despite minimal genetic introgression, there is lots of Uralic Y-DNA (see also Eurogenes) in this ancient DNA sample from Hungary. 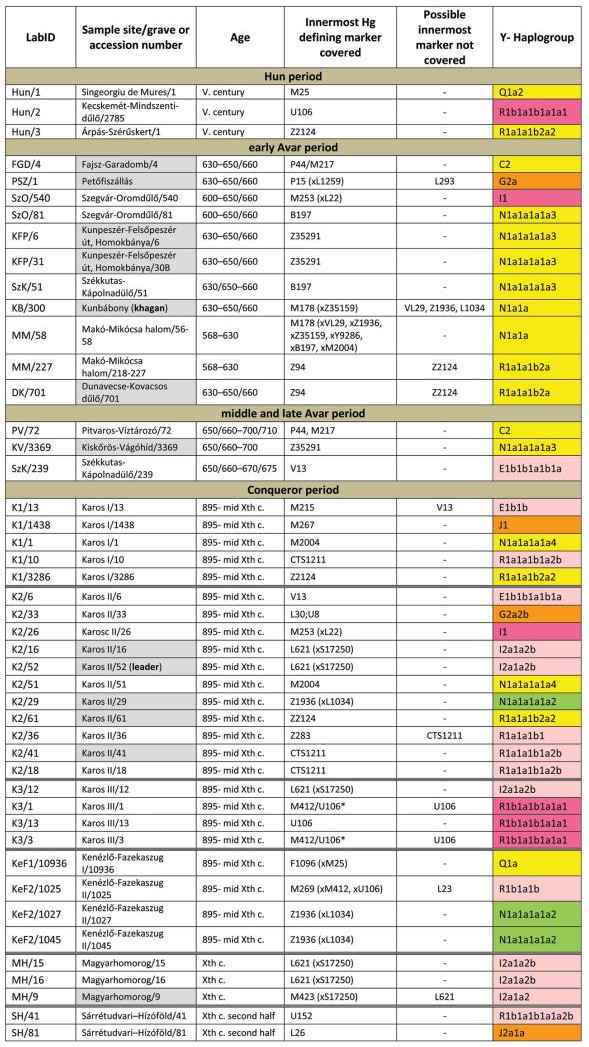 Via Bernard's Blog. From that post (translated by Google from the French original):


Endre Neparáczki and his colleagues have just published a paper entitled: Y-chromosome haplogroups from Hun, Avar and conquering Hungarian nomadic period people of the Carpathian Basin. They analyzed the Y chromosome haplogroups of several individuals from 8 cemeteries in Hungary hosting Hungarian conquerors but also individuals from the previous Hun and Avar periods. The authors also tested some autosomal markers associated with eye, hair and skin color, and lactose tolerance. The authors obtained results for 46 men including three from the Hun period and 14 from the Avar period.

And then? Was there active selection for R1a and R1b? I don't have the modern Hungary Y-haplo numbers, do they vary from the significantly from the medieval proportions?

"Selection" is an odd term for Ottoman and Mongol depredations.

@Guy Although I agree with Ryan that "selection" is an odd term (although I imagine that you used the term rhetorically, with the implication that this is not plausible). Hungary did have a lot of dramatic mass migration and mass death events after the 10th century, however, so, while selection in the intrinsic selective fitness sense may not be apt, there are plausible historical reasons for there to be big disparities between the medieval proportions and the modern ones to a greater extent than most places in Europe.

Biased sampling may also be a more relevant factor. This was not a representative sample of the medieval period. Instead:

The sample design suggests that the focus is on trying to confirm with Y-DNA and autosomal DNA the hypothesis that the Uralic Hungarian language arrived via Magyar conquerers whose DNA profiles were typical of Uralic language speakers.

It would have been nice to have a data set of medieval commoner DNA to compare.

@Onur - Thanks. Amazing that events in Mongolia could so dramatically and quickly impact Hungary.

Yes, and lastly look at what Genghis Khan and his Mongols did in a single generation also coming from the environs of Mongolia.