There is no serious doubt that the Munda languages of South Asia arrived starting around 3000 BCE from Southeast Asia via rice farmers. A new paper whose abstract and citation appears below fills in some of the details of how that happened.

At least three patrlineal founders over a period of time, differentiated between North Munda and South Munda and Khasi were involved, and Tibeto-Burman Y-DNA O2a-M95 came separately with a different founding population. They did not experience a language shift from Austroasiatic languages in South Asia. 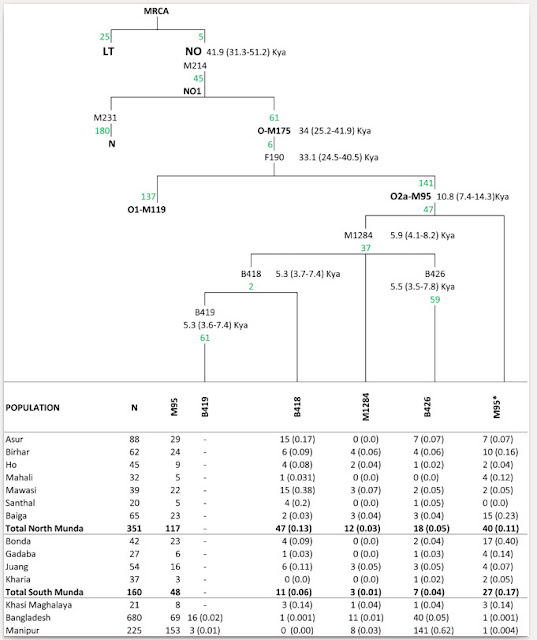 With this increased resolution, we were able to identify at least three founders downstream to haplogroup O2a-M95 who are likely to have been associated with the dispersal of Austroasiatic languages to South Asia.

The fourth founder was exclusively present amongst Tibeto-Burman speakers of Manipur and Bangladesh.

In sum, our new results suggest the arrival of Austroasiatic languages in South Asia during last five thousand years.

Background from the Introduction (emphasis added):


Among the four major language families present in South Asia, the Austroasiatic language family has the smallest number of speakers. Nevertheless, its geographical location and exclusive distribution amongst tribal populations make Austroasiatic one of the most intriguing language families in the context of the Subcontinent where it is represented by the major Mundari and minor Khasi branches. The advancement of technology has helped to resolve the long standing debate about the arrival of Austroasiatic (Mundari) speakers to South Asia. The three types of genetic markers (mtDNA, Y chromosome and autosomes) revealed the extraordinary migratory phenomenon. Because of the incompatible histories of their paternal and maternal ancestries, the origin and dispersal of Austroasiatic language in these populations had remained a debatable issue for many years. For Mundari speakers, the exclusive South Asian maternal ancestry pinpointed their origin in South Asia, whereas their overwhelming East/Southeast-Asian-specific paternal ancestry associated with haplogroup O2a-M95 suggested a dispersal from East to West. Another Austroasiatic branch, Khasi, evinced mixed ancestries for both the paternal and maternal lines. Over a century of ethnographical and Indological scholarship had identified Austroasiatic language communities as representing the earliest settlers of South Asia, so that this view represented the consensus. Then, the increasing resolution of the Y-chromosomal tree and Y-STR-based coalescent calculations began to challenge our view of these populations. Despite the problems with STR-based coalescent calculations, the Y-STR variance for haplogroup O2a-M95 was consistently reported to be significantly higher in Southeast Asia.

With the technological advancement, a much clearer picture has now emerged, showing a strong association of largely male mediated gene flow for the dispersal of Mundari speakers from Southeast Asia to South Asia. The autosomal data showed a bidirectional gene flow between South and Southeast Asia. In addition, the global distribution and internal phylogeny of Y-chromosomal haplogroup O2a-M95 decisively demonstrated that this language dispersal transpired from Southeast Asia to South Asia. In a recent genome-wide study of a large number of South and Southeast Asian populations, Dravidian speakers of Kerala and Lao speakers from Laos were found to be the best ancestral proxies for Mundari speakers. The admixture dates for these ancestries were estimated to be between 2-3.8 kya. Moreover, this study also found clear-cut genetic differentiation between North and South Munda groups.

Based on the prevalence of haplogroup O2a-M95, the arrival of Mundari speakers to South Asia was shown to have been largely male-mediated. However, it remained unclear how many paternal founders had brought this haplogroup to South Asia. The recent admixture time estimated through autosomal data has now narrowed down the arrival of Mundari ancestors to South Asia. Therefore, a marker such as M95, which originated >12 kya, would not help us to understand the most recent founding lineages. The association of haplogroup O2a-M95 with the arrival of Mundari speakers has been explored previously in detail. However, the lack of downstream markers made it impossible to discern the number of most recent founders who had originally borne the language to South Asia. Moreover, previous studies on Tibeto-Burman populations of Northeast India and Bangladesh also reported this same haplogroup, giving rise to the contentious question as to whether the expansion of Tibeto-Burmans could have involved the assimilation of Austroasiatic populations.

Therefore, we took advantage of recent technological advancements and extracted the downstream SNPs associated with Munda-related populations from one of our recent studies. We genotyped these SNPs for large number of Mundari, Tibeto-Burman and Bangladeshi population groups and reconstructed the phylogeographical distribution of downstream branches of haplogroup O2a-M95 in South Asia.

From the body text (emphasis added):

The diverse founders as well as the large number of unclassified samples (41% for Mundari, 38% for Khasi and 1% for Tibeto-Burmans) suggest that the migration of Austroasiatic speakers to South Asia was not associated with the migration of a single clan or a drifted population.

Neither does the contrasting distribution of various founders discovered in this study amongst both Mundari and Tibeto-Burman populations support the assimilation of the former to the latter.