The Testimony Of Chewing Gum

A new paper managed to extract a lot of information out of a single sample of very old chewing gum - a date, a complete human genome of the person who used it, ancient DNA that showed what she was eating at the time, and the microbiome of her mouth including a disease that she was fighting at the time similar to mono.

This rich time capsule of ancient DNA comes from a time period when hunter-gatherers who started to repopulate Europe from European refugia around 14,000 years ago, when glaciers had receded after the Last Glacial Maximum ca. 20,000 years ago, co-existed with the first farmers of Europe who migrated in slowly advancing waves along watersheds (mostly in whole family units with only modest admixture with local hunter-gatherers) ultimately from Anatolia (i.e. modern Turkey) who had just started to arrive within a few centuries of that time of this sample. 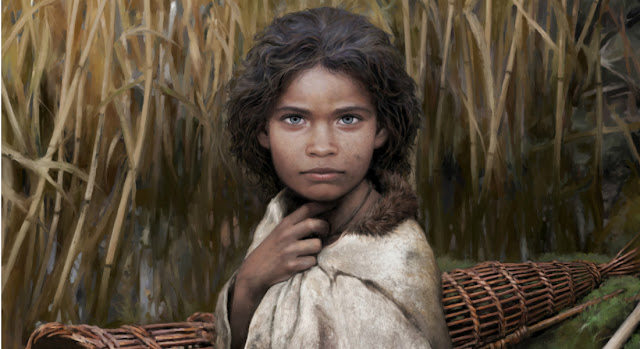 An artist's recreation of the woman who used the chewing gum based upon her DNA (from here).

The image above is our best estimate of what Western European hunter-gathers looked like before farming and herding were introduced based upon their DNA.

This woman's appearance lacks the phenotypic changes in typical Europeans that arose with the first farmers of Europe who descended from Anatolian first farmers (who in turn, were descendants of Fertile Crescent hunter-gatherers).

The share of Western European hunter-gather ancestry in modern Europeans is quite modest and mostly comes indirectly from early farmers who admixed with the hunter-gatherers who preceded them in places they moved (often limited to places with good water supplies and fertile soils while hunter-gatherers remained dominant or adopted herding only on less prime farming land).

During excavations on Lolland, [Denmark] archaeologists have found a 5,700-year-old type of "chewing gum" made from birch pitch. In a new study, researchers from the University of Copenhagen succeeded in extracting a complete ancient human genome from the pitch. It is the first time that an entire ancient human genome has been extracted from anything other than human bones. . . . [Scientists] also retrieved DNA from oral microbes and several important human pathogens, which makes this a very valuable source of ancient DNA, especially for time periods where we have no human remains[.]

Based on the ancient human genome, the researchers could tell that the birch pitch was chewed by a female. She was genetically more closely related to hunter-gatherers from the mainland Europe than to those who lived in central Scandinavia at the time. They also found that she probably had dark skin, dark hair and blue eyes.

The birch pitch was found during archaeological excavations at Syltholm, east of Rødbyhavn in southern Denmark. . . . Syltholm is completely unique. Almost everything is sealed in mud, which means that the preservation of organic remains is absolutely phenomenal[.]  It is the biggest Stone Age site in Denmark and the archaeological finds suggest that the people who occupied the site were heavily exploiting wild resources well into the Neolithic, which is the period when farming and domesticated animals were first introduced into southern Scandinavia[.]

This is reflected in the DNA results, as the researchers also identified traces of plant and animal DNA in the pitch -- specifically hazelnuts and duck -- which may have been part of the individual's diet.

In addition, the researchers succeeded in extracting DNA from several oral microbiota from the pitch, including many commensal species and opportunistic pathogens . . . The researchers also found DNA that could be assigned to Epstein-Barr Virus, which is known to cause infectious mononucleosis or glandular fever.

Birch pitch is a black-brown substance that is produced by heating birch bark. It was commonly used in prehistory for hafting stone tools as an all-purpose glue. The earliest known use of birch pitch dates back to the Palaeolithic.

Pieces of birch pitch are often found with tooth imprints suggesting that they were chewed. As the pitch solidifies on cooling, it has been suggested that it was chewed to make it malleable again before using it for hafting etc. Other uses for birch pitch have also been suggested. For example, one theory suggests that birch pitch could have been used to relieve toothache or other ailments as it is mildly antiseptic. Other theories suggest, people may have used it as a kind of prehistoric tooth brush, to suppress hunger, or just for fun as a chewing gum.

From here. The source paper is:

OT: you might find this of interest, lots of things happened around this time -

Thanks for noting that, I'll take a look when I get a chance. It is very much something I find of interest.