Ancient DNA From the Southern Levant

Cell published a companion article to the Anatolian ancient DNA article discussed in my previous post in the same edition of Cell. 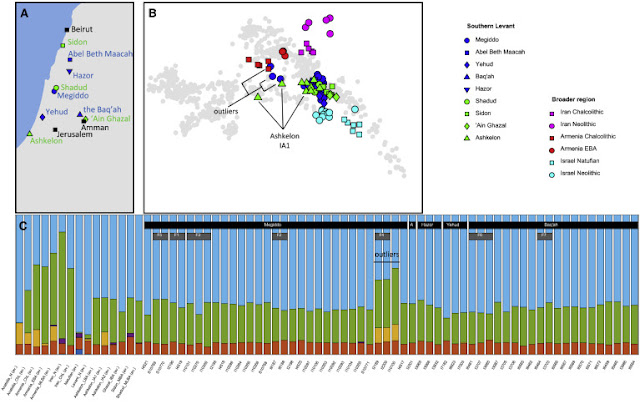 The input from the Zagros and/or Caucasus to the Levant discussed below has plausible historically attested Hurrian/Mittani, Kassite and Kura-Araxes influences, in roughly the relevant time period, that could help to explain them.

We report genome-wide DNA data for 73 individuals from five archaeological sites across the Bronze and Iron Ages Southern Levant.

These individuals, who share the “Canaanite” material culture, can be modeled as descending from two sources: (1) earlier local Neolithic populations and (2) populations related to the Chalcolithic Zagros or the Bronze Age Caucasus.

The non-local contribution increased over time, as evinced by three outliers who can be modeled as descendants of recent migrants.

We show evidence that different “Canaanite” groups genetically resemble each other more than other populations. We find that Levant-related modern populations typically have substantial ancestry coming from populations related to the Chalcolithic Zagros and the Bronze Age Southern Levant. These groups also harbor ancestry from sources we cannot fully model with the available data, highlighting the critical role of post-Bronze-Age migrations into the region over the past 3,000 years.

The introduction to the paper in the body text provides useful historical context, among other points, noting in the first sentence that the Bronze Age in the Southern Levant starts relatively early in absolute chronology relative, for example, to much of Europe.

The Bronze Age (ca. 3500–1150 BCE) was a formative period in the Southern Levant, a region that includes present-day Israel, Jordan, Lebanon, the Palestinian Authority, and southwest Syria. This era, which ended in a large-scale civilization collapse across this region, shaped later periods both demographically and culturally.

The following Iron Age (ca. 1150–586 BCE) saw the rise of territorial kingdoms such as biblical Israel, Judah, Ammon, Moab, and Aram-Damascus, as well as the Phoenician city-states.

In much of the Late Bronze Age, the region was ruled by imperial Egypt, although in later phases of the Iron Age it was controlled by the Mesopotamian-centered empires of Assyria and Babylonia. Archaeological and historical research has documented major changes during the Bronze and Iron Ages, such as the cultural influence of the northern (Caucasian) populations related to the Kura-Araxes tradition during the Early Bronze Age and effects from the “Sea Peoples” (such as Philistines) from the west in the beginning of the Iron Age.

The inhabitants of the Southern Levant in the Bronze Age are commonly described as “Canaanites,” that is, residents of the Land of Canaan. The term appears in several 2nd millennium BCE sources (e.g., Amarna, Alalakh, and Ugarit tablets) and in biblical texts dating from the 8th–7th centuries BCE and later. In the latter, the Canaanites are referred to as the pre-Israelite inhabitants of the land. Canaan of the 2nd millennium BCE was organized in a system of city-states, where elites ruled from urban hubs over rural (and in some places pastoral) countryside.

The material culture of these city-states was relatively uniform, but whether this uniformity extends to their genetic ancestry is unknown. Although genetic ancestry and material culture are unlikely to ever match perfectly, past ancient DNA analyses show that they might sometimes be strongly associated. In other cases, a direct correspondence between genetics and culture cannot be established.

Here, we set out to address three issues. First, we sought to determine the extent of genetic homogeneity among the sites associated with Canaanite material culture. Second, we analyzed the data to gain insights into the timing, extent, and origin of gene flow that brought Zagros- and Caucasus-related ancestry to the Bronze Age Southern Levant. Third, we assessed the extent to which additional gene flow events have affected the region since that time.

To address these questions, we generated genome-wide ancient DNA data for 71 Bronze Age and 2 Iron Age individuals, spanning roughly 1,500 years, from the Intermediate Bronze Age to the Early Iron Age. Combined with previously published data on the Bronze and Iron Ages in the Southern Levant, we assembled a dataset of 93 individuals from 9 sites across present-day Israel, Jordan, and Lebanon, all demonstrating Canaanite material culture.

We show that the sampled individuals from the different sites are usually genetically similar, albeit with subtle but in some cases significant differences, especially in residents of the coastal regions of Sidon and Ashkelon. Almost all individuals can be modeled as a mixture of local earlier Neolithic populations and populations from the northeastern part of the Near East. However, the mixture proportions change over time, revealing the demographic dynamics of the Southern Levant during the Bronze Age.

Finally, we show that the genomes of present-day groups geographically and historically linked to the Bronze Age Levant, including the great majority of present-day Jewish groups and Levantine Arabic-speaking groups, are consistent with having 50% or more of their ancestry from people related to groups who lived in the Bronze Age Levant and the Chalcolithic Zagros. These present-day groups also show ancestries that cannot be modeled by the available ancient DNA data, highlighting the importance of additional major genetic effects on the region since the Bronze Age.

Hat Tip to Eurogenes. Davidski at Eurogenes notes with respect to this paper that:

The Megiddo samples include a trio of interesting outliers dated to 1600-1500 BCE with significant ancestry from the steppe.

One of these individuals is a male, I2189, who belongs to Y-haplogroup R and probably R1a. So he might . . . be of Indo-Aryan origin.

Another Megiddo male, S10768, belongs to R1b-M269 and probably shows a few per cent of steppe ancestry. I've already discussed how R1b and steppe ancestry may have ended up in the Bronze Age Near East in a couple of my previous posts:

How did steppe ancestry spread into the Biblical-era Levant?

The geographic extent of wares associated with the Kura-Araxes culture of the Caucasus is shown below: 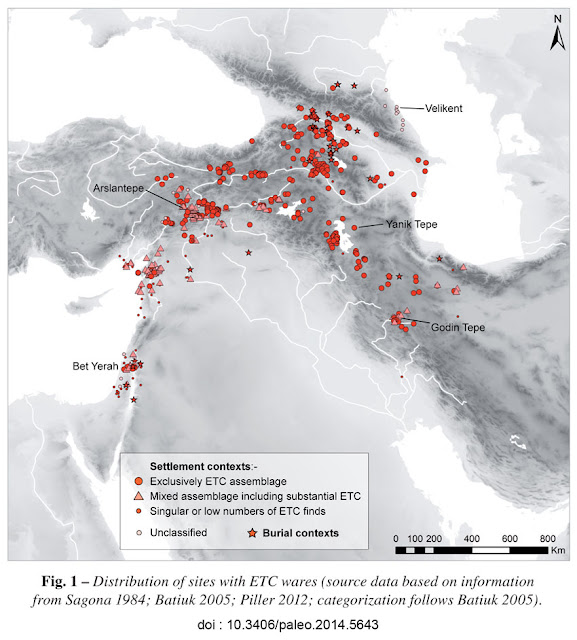