This compares to previous global estimates from multiple sources previously reported at this blog as follows:

The new measurement is consistent at the one sigma level with the 2018 and 2019 estimates from the Particle Data Group and with the 2019 estimate from the FLAG group, but purports to be more than twice as precise as any of those estimates.

The FLAG2019 paper provides a chart that graphically shows some of its source data for its global average estimate of the charm quark mass including the margins of errors involved. Notably, the outliers (which tend to run heavy) have the largest margins of error and tend to be older. 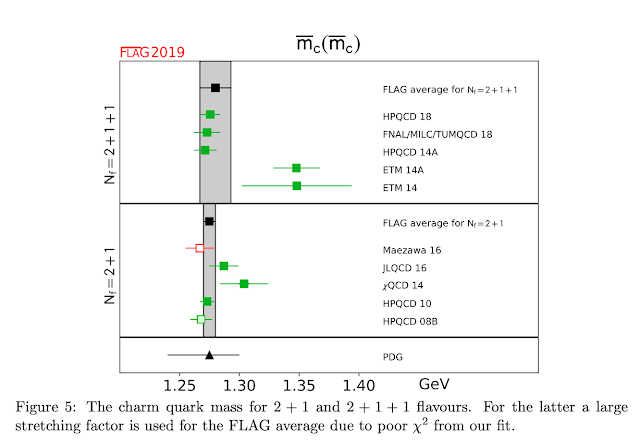 Rivero's extended Koide's formula from 2011 predicts a charm quark mass of 1,359.56428 MeV which has long been known to be too high, and lacks of the precision and accuracy of Koide's rule for charged leptons. But, comes pretty close for a formula generalizing the Koide's charged lepton rule with only the electron and muon masses as inputs.

My first order adjustment of Rivero's formula based upon the CKM matrix and quark masses not considered in Rivero's formula predicts a charm quark mass of 1,293.21 MeV, which is also probably too high (although it is within one standard deviation of the 2018 PDG value and the FLAG19 value, and within 1.2 sigma of the 2019 PDG value), but is significantly closer to the experimentally measured value. Probably, even if my first order adjustment of Rivero's formula is correct, it also needs at least a second order adjustment as well that I haven't worked out.
Posted 7:03 AM
Email ThisBlogThis!Share to TwitterShare to FacebookShare to Pinterest
Labels: conjectures, physics, Standard Model physics

I just use Adobe for my PDFs.