There is more to Stonehenge than was previously known. "The discovery makes up for the cancellation of this year’s summer solstice celebrations at Stonehenge – on 20 June – due to the ban on mass gatherings prompted by Covid-19." They were probably built by the same Neolithic/Megalithic (pre-Bell Beaker) people who built Stonehenge itself. 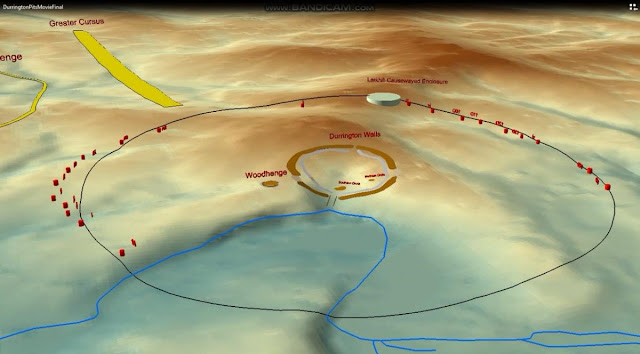 The mystery near and around Stonehenge keeps growing.

The latest revelation is the discovery of a ring of at least 20 prehistoric shafts about 2 miles from the famous Neolithic site of immense upright stones, according to an announcement from the University of Bradford.

Archaeologists say the "astonishing" shafts in Durrington Walls date back to 2500 B.C. and form a circle more than 2 kilometers (1.2 miles) in diameter. Each one measures up to 10 meters (33 feet) in diameter and 5 meters (16 feet) deep.

Researchers say there may have been more than 30 of the shafts at one time. . . .

The exact purpose of the shafts is unclear, but one prominent theory is that they may have acted as a boundary to a sacred area connected to Stonehenge.

Interesting how the Avon flows into the circle, meets the Durrington Walls enclosure then flows out to the Stonehenge avenue.

"Britain
Beakers arrived in Britain around 2500 BC, with migrations of Yamnaya-related people, resulting in a near total turnover of the British population.[86] The Beaker-culture declined in use around 2200–2100 BC with the emergence of food vessels and cinerary urns and finally fell out of use around 1700 BC.[55] The earliest British beakers were similar to those from the Rhine,[87] but later styles are most similar to those from Ireland.[88] In Britain, domestic assemblages from this period are very rare, making it hard to draw conclusions about many aspects of society. Most British beakers come from funerary contexts.

Britain's only unique export in this period is thought to be tin. It was probably gathered in streams in Cornwall and Devon as cassiterite pebbles and traded in this raw, unrefined state.[89] It was used to turn copper into bronze from around 2200 BC and widely traded throughout Britain and into Ireland. Other possible European sources of tin are located in Brittany and Iberia, but it is not thought they were exploited so early as these areas did not have Bronze until after it was well established in Britain and Ireland.[90]

The most famous site in Britain from this period is Stonehenge, which had its Neolithic form elaborated extensively. Many barrows surround it and an unusual number of 'rich' burials can be found nearby, such as the Amesbury Archer. Another site of particular interest is Ferriby on the Humber Estuary, where western Europe's oldest plank built boat was recovered."