One of the most widely examined beyond the Standard Model theories is called supersymmetry (SUSY) and its quantum gravity extension called supergravity (SUGRA). There are also a variety of other widely studied potential beyond the Standard Model theories that give rise to new particles.
The current experimental exclusions on Supersymmetric Particles, on fourth generation Standard Model Particles, and on other select beyond the Standard Model particles, according to the Particle Data Group can be summarized as follows after a list of some common reference points to provide context.
Background Context For Particle Physics Masses
For context, the heaviest fundamental fermions of the Standard Model (the third generation fundamental charged fermions and the heaviest Standard Model neutrino mass) are the top quark which is about 173 GeV, the bottom quark which is about 4.2 GeV, the tau lepton which is about 1.78 GeV, and the heaviest Standard Model neutrino which is probably about 0.1 eV although direct experimental measurements only exclude heaviest neutrino masses up to 18.2 MeV.
The other eight fundamental fermions of the Standard Model are less massive. In the second generation of fundamental fermions, the charm quark is about 1.28 GeV, the strange quark is about 0.1 GeV, the muon is about 0.1 GeV, the up quark is about 0.0025 GevV, the down quark is about 0.005 GeV, the electron is about 0.000511 GeV, and the two lightest neutrino masses are each less than about 1 eV based upon direct measurements and less than 0.0000000001 GeV based upon reasonable indirect measurements and astronomy observations.
There are three massive fundamental bosons in the Standard Model, the Higgs boson is about 125 GeV, the Z boson is about 91.2 GeV and the W boson is about 80.4 GeV. Photons and gluons have zero rest mass in the Standard Model, and the hypothetical graviton in most quantum gravity theories also has zero rest mass. The vacuum expectation value of the Higgs field associated with the Higgs boson is about 246 GeV. The Higgs vacuum expectation value is also sometimes known as the "electroweak scale" and is the energy scale at which the early inventors of supersymmetry theories expected to see supersymmetric phenomena - something that the Large Hadron Collider and other experiments have now largely ruled out.
Protons and neutrons have masses of a little less than 0.94 GeV each. The lightest composite particle in the Standard Model (which is the main carrier of the residual strong force that binds protons and neutrons in atomic nuclei together) has a mass of a bit less than 0.14 GeV. The heaviest composite particles consisting of quarks bound directly by gluons (or bound states of gluons only), which are called hadrons ever actually produced experimentally in particle colliders, is about 6 GeV although it is theoretically possible to create hadrons with masses of up to about 14 GeV (or perhaps even up to about 30 GeV for hadrons such as tetraquarks, pentaquarks or hexaquarks).
The Large Hadron Collider can produce collisions with energies of up to about 14 TeV (14,000 GeV), but it isn't usually possible for collisions of those energies to produce individual particles of that mass sufficient to make a statistically significant discovery of it.
Supersymmetric Particles (including extended Higgs boson sectors)
In more minimal supersymmetric theories, each Standard Model fundamental particle has a supersymmetric partner, but the correspondence is not exact because some supersymmetric particles "blend" into each other. There are also additional electromagnetically neutral and charged Higgs bosons. There are less minimal supersymmetric theories in which there are even more particles, and there are "supergravity" theories in which there is a graviton and its supersymmetric partner, the gravitino, in addition to the usual supersymmetric particle zoo. 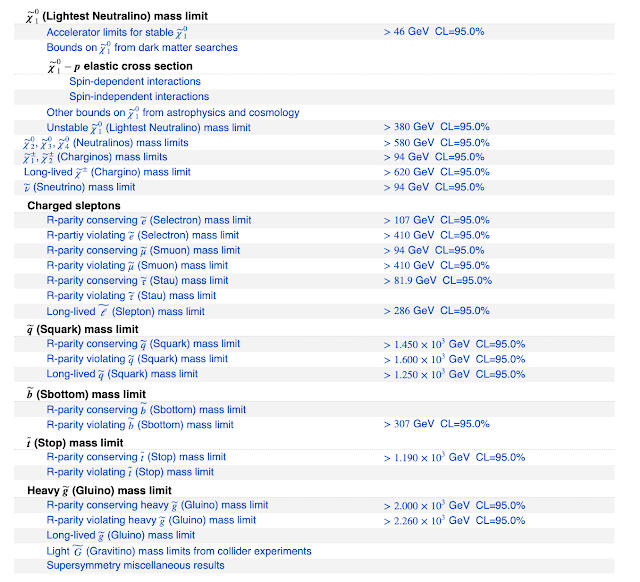 To further simplify the chart above, the 95% confidence level exclusions by particle, incorporating all evidence and using the least restrictive limits are:

An extension of Koide's rule provides a reasonable theoretical expectation for what these masses might be if fourth generation Standard Model fermions existed. The predicted b' mass would be 3,563 GeV and the predicted t' mass would be about 83.75 TeV (i.e. 83,750 GeV). These fourth generation quark masses are not  currently experimentally excluded.
The Koide's rule extension for charged leptons (a muon, tau, tau prime triple), however, would imply a 43.7 GeV tau prime, which is clearly ruled out experimentally.

A naive extension of Koide's formula to neutrinos with an electron neutrino of near zero mass would lead to a fourth generation neutrino of about 0.05 eV and it could have a mass of up to 11.6 eV in a nearly degenerate neutrino mass hierarchy.

The exclusion of a fourth generation Standard Model neutrino can be taken much further, however, because a fourth generation Standard Model neutrino of 45 GeV or more, however, would be indistinguishable from a hypothetical dark matter particle known as a WIMP (weakly interacting massive particle) that had a weak force cross section of interaction with ordinary matter identical to that of ordinary neutrinos.

Dark dark matter detection experiments have ruled out particles that make up most of hypothetical dark matter particles having weak force interaction coupling constants equal to Standard Model neutrinos at masses of up to about 10 TeV (i.e. 10,000 GeV). In the chart below, that cross section is the blue dotted line marked "Z portal C(x)=1" by a factor of 1,000,000. So, even if the flux of 45 GeV+ Standard Model neutrinos were a million times smaller than the hypothetical flux of dark matter particles through Earth, they would be ruled out by the direct detection experiments up to about 10 TeV. 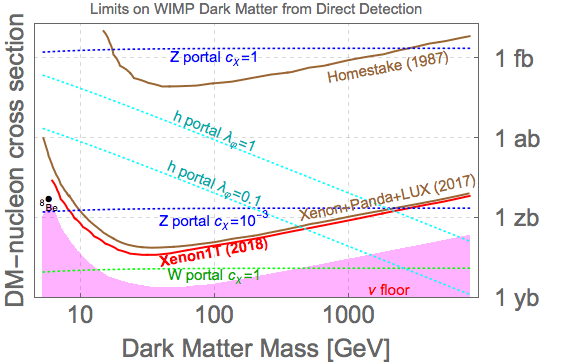 Limits on Next Generation or Parallel Gauge Bosons