People in South Asia with non-trace African ancestry are predominantly part of the Siddi people whose historical origins, primarily during the colonial period, are fairly well documented and are corroborated with population genetic evidence.

This 2011 paper about the genetics of the Siddi people of South Asia isn't new, but I came across it while looking into something else and it is interesting. The Wikipedia summary at the link above about these people is as follows from the introduction and history sections:

The Siddi (pronounced [sɪd̪d̪i]), also known as Sidi, Siddhi, Sheedi or Habshi, are an ethnic group inhabiting India and Pakistan. Members are descended from the Bantu peoples of Southeast Africa. Some were merchants, sailors, indentured servants, slaves and mercenaries. The Siddi population is currently estimated at around 270,000–350,000 individuals, with Karnataka, Gujarat and Hyderabad in India and Makran and Karachi in Pakistan as the main population centres. Siddis are primarily Muslims, although some are Hindus and others belong to the Catholic Church. . . .

The first Siddis are thought to have arrived in India in 628 AD at the Bharuch port. Several others followed with the first Arab Islamic conquest of the subcontinent in 712 AD. The latter group are believed to have been soldiers with Muhammad bin Qasim's Arab army, and were called Zanjis.
Some Siddis escaped slavery to establish communities in forested areas, and some also established the small Siddi principalities of Janjira State on Janjira Island and Jafarabad State in Kathiawar as early as the twelfth century. A former alternative name of Janjira was Habshan (i.e., land of the Habshis). In the Delhi Sultanate period prior to the rise of the Mughals in India, Jamal-ud-Din Yaqut was a prominent Siddi slave-turned-nobleman who was a close confidant of Razia Sultana (1235–1240 CE). Although this is disputed, he may also have been her lover, but contemporary sources do not indicate that this was necessarily the case.
Siddis were also brought as slaves by the Deccan Sultanates. Several former slaves rose to high ranks in the military and administration, the most prominent of which was Malik Ambar.
Later the Siddi population was added to via Bantu peoples from Southeast Africa that had been brought to the Indian subcontinent as slaves by the Portuguese. Later most of these migrants became Muslim and a small minority became Hindu. The Nizam of Hyderabad also employed African-origin guards and soldiers.

Wikipedia's discussion of the genetics of the Siddi people at the same link mostly tracks this paper (Shah et al. (2011)), and a few other papers that came out close in time to it. Pakistani Siddis have some African ancestry but much less than Siddi people in India.

Y DNA
A Y-chromosome study by Shah et al. (2011) tested Siddi individuals in India for paternal lineages. The authors observed the E1b1a1-M2 haplogroup, which is frequent among Bantu peoples, in about 42% and 34% of Siddis from Karnataka and Gujarat, respectively. Around 14% of Siddis from Karnataka and 35% of Siddis from Gujarat also belonged to the Sub-Saharan B-M60. The remaining Siddis had Indian associated or Near Eastern-linked clades, including haplogroups P, H, R1a-M17, J2 and L-M20.
Thangaraj (2009) observed similar, mainly Bantu-linked paternal affinities amongst the Siddi.
Qamar et al. (2002) analysed Makrani Siddis in Pakistan and found that they instead predominantly carried Indian-associated or Near Eastern-linked haplogroups. R1a1a-M17 (30.30%), J2 (18.18%) and R2 (18.18%) were their most common male lineages. Only around 12% carried Africa-derived clades, which mainly consisted of the archaic haplogroup B-M60, of which they bore the highest frequency of any Pakistani population Underhill et al. (2009) likewise detected a relatively high frequency of R1a1a-M17 (25%) subclade among Makrani Siddis.

mtDNA
According to an mtDNA study by Shah et al. (2011), the maternal ancestry of the Siddi consists of a mixture of Bantu-associated haplogroups and Indian-associated haplogroups, reflecting substantial female gene flow from neighbouring Indian populations. About 53% of the Siddis from Gujarat and 24% of the Siddis from Karnataka belonged to various Bantu-derived macro-haplogroup L subclades. The latter mainly consisted of L0 and L2a sublineages associated with Bantu women. The remainder possessed Indian-specific subclades of the Eurasian haplogroups M and N, which points to recent admixture with autochthonous Indian groups.
Autosomal DNA
Narang et al. (2011) examined the autosomal DNA of Siddis in India. According to the researchers, about 58% of the Siddis' ancestry is derived from Bantu peoples. The remainder is associated with locals North and Northwest Indian populations, due to recent admixture events.
Similarly, Shah et al. (2011) observed that Siddis in Gujarat derive 66.90%–70.50% of their ancestry from Bantu forebears, while the Siddis in Karnataka possess 64.80%–74.40% such Southeast African ancestry. The remaining autosomal DNA components in the studied Siddi were mainly associated with local South Asian populations. According to the authors, gene flow between the Siddis' Bantu ancestors and local Indian populations was also largely unidirectional. They estimate this admixture episode's time of occurrence at within the past 200 years or eight generations.
However, Guha et al. (2012) observed few genetic differences between the Makrani of Pakistan and adjacent populations. According to the authors, the genome-wide ancestry of the Makrani was essentially the same as that of the neighboring Indo-European speaking Balochi and Dravidian-speaking Brahui. 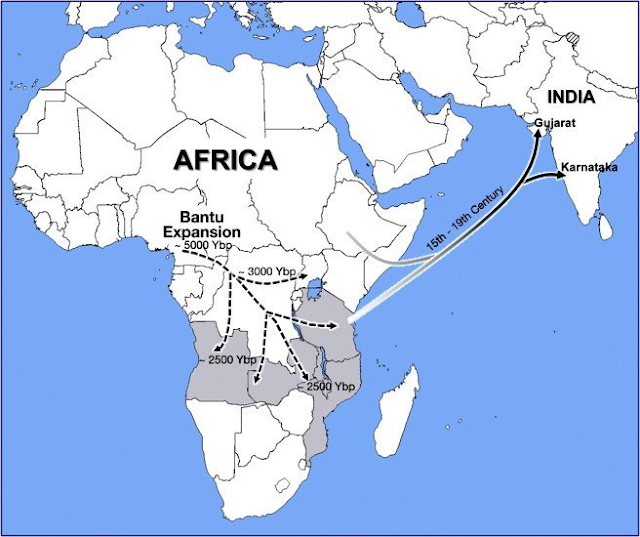 From the body text of the paper's introduction and conclusion:

Siddis, or Habshis, are a unique tribe that has African ancestry and lives in South Asia. They are mainly found in three Indian states—Gujarat, Karnataka, and Andhra Pradesh—and according to the latest census, their total population size is about 0.25 million. The first documented record of Siddis in India dates to 1100 AD, when the Siddis settled in Western India. By the thirteenth century, substantial numbers of Siddis were being imported by the Nawabs and the Sultans of India to serve as soldiers and slaves. The major influx of Siddis occurred during the 17th–19th centuries, when the Portuguese brought them as slaves to India. [Portugal discontinued its African slave trade in 1869.] Previous genetic studies have shown that the Siddis have ancestry from up to three continental groups: Africans, Europeans, and South Asians. . . .

The majority of the Siddis [Y-DNA] haplotypes were found shared on otherwise Bantu-specific branches and were present all over the tree . . . all haplogroup [Y-DNA] B2 Gujarat Siddis formed a cluster and coalesced to their most recent common ancestor 2.4 ± 1 thousand years ago. . . . The effective population size of the African ancestors of Siddis brought to India during the slave trade was estimated as ∼1,400 individuals.

African-specific mtDNA haplogroups were present at high frequency in the Siddis; these results were similar to the observations from the autosomal and paternal lineages. The African-specific haplogroup L was present at a frequency of 53% and 24% in Siddis from Gujarat and Karnataka, respectively. Previous studies have suggested that the L0a, L2a, L3b, and L3e haplogroups are associated with the Bantu expansion. Haplogroup L2a (including L2a1) was observed in the Siddis along with rare sublineages of L2, which further supports the conclusion that the ancestors of the Siddis were most likely African Bantus. The L0d lineage. . . is now largely confined to the Khoisan-speaking South African populations but . . . was possibly more widespread in the past, was also observed in two Siddi individuals from Gujarat state. . . .

Consistent with the Y-chromosomal results, there is no evidence of African haplogroups in the neighboring Indian populations, thus confirming the hypothesis of unidirectional gene flow to Siddi individuals from contemporary Indian populations. . . .

During the course of the Bantu expansion, African farmers settled in East Africa. Later, during the 15th to 17th centuries, this region was predominantly ruled by the Portuguese. They brought some Africans to India as slaves and sold them to local Nawabs and Sultans, whose descendants admixed with neighboring populations, comprise the present-day Siddi population of India.

This post was inspired by an article with a mix of accurate facts and a somewhat misleading headline and suggestions.

I've wondered if the Sentinalese people of the Andamans had some Siddi admixture. Their fierce anti-foreigner stance, their taller stature vs other Andamaners, seems like maybe...

@DDeden Almost certainly not. Sentinalese genetics have been studied extensively and they are basically pure pre-admixture Ancestral South Asian, perhaps with a sprinkling of old Southeast Asian ancestry, These were isolated from pre-Last Glacial Maximum to quite late in the age of exploration and weren't recipients of much outside adnixture.