A Forgotten Mass Slaughter Of Jews

From its founding in 305 BCE, mostly with the forcibly displaced residents of Babylon, until 141 BCE, Seleucia was culturally and politically Greek, founded by a successor to Alexander the Great. 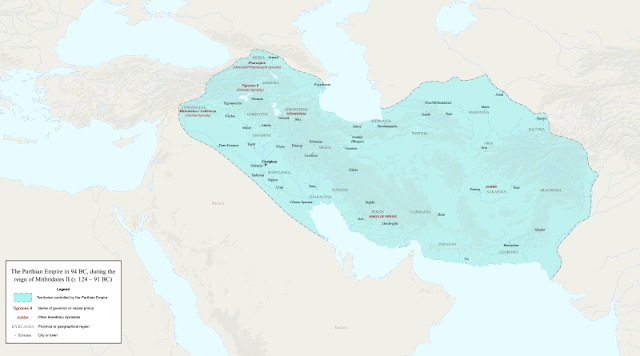 [T]he Parthians under Mithridates I conquered the city, and Seleucia became the western capital of the Parthian Empire. Tacitus described its walls, and mentioned that it was, even under Parthian rule, a fully Hellenistic city. Ancient texts claim that the city had 600,000 inhabitants, and was ruled by a senate of 300 people. It was clearly one of the largest cities in the Western world; only Rome, Alexandria and possibly Antioch were more populous.
In 55 BC, a battle fought near Seleucia was crucial in establishing dynastic succession of the Arsacid kings. In this battle between the reigning Mithridates III (supported by a Roman army of Aulus Gabinius, governor of Syria) and the previously deposed Orodes II, the reigning monarch was defeated, allowing Orodes to re-establish himself as king.
In 117 AD, Seleucia was burned down by the Roman emperor Trajan during his conquest of Mesopotamia, but the following year it was ceded back to the Parthians by Trajan's successor, Hadrian, then rebuilt in the Parthian style. It was completely destroyed by the Roman general Avidius Cassius in 165.

It was rebuilt sixty years later (i.e. around 225 CE) by the Persians.

Seleucia was made the capitol of the (Nestorian) Church of the East in 410 CE (it was declared heretical by the Western and Byzantine churches in 431 CE, but remained the predominant denomination of Christianity in West and Central Asia). Seleucia persisted in this form until several centuries later. Baghdad was founded in 762 CE and Seleucia was abandoned for Baghdad entirely about fifty years plus or minus later, when a shift in the Tigris River left it a city of desert sands.

The Church of the East dies in Iran, Iraq and the Turan (i.e. Central Asia) in the 1300s crumbling in the face of the Mongolia Empire's expansion.