The ATLAS experiment, using the full strength 13 TeV LHC collisions of Run-2 has looked for Higgs portal dark matter and reports in a new preprint that its search has come up empty.

The experimental ATLAS results were almost a perfect match to the predicted Standard Model backgrounds in its search using four different event selection criteria to make the result robust. All of the experimental results were within one sigma plus rounding to the nearest discrete measurable outcome.

The exclusion is stronger than direct dark matter detection experiments for dark matter particle masses of under 2 GeV for the dark matter model it examined.

Additionally, the results for the 𝑍'B model are interpreted in terms of 90% CL limits on the DM–nucleon scattering cross section, as a function of the DM particle mass, for a spin-independent scenario. For a DM mass lower than 2 GeV, the constraint with couplings sin 𝜃 = 0.3, 𝑔𝑞 = 1/3, and 𝑔𝜒 = 1 placed on the DM–nucleon cross section is more stringent than limits from direct detection experiments at low DM mass, showing the complementarity between the several approaches trying to unveil the microscopic nature of DM. 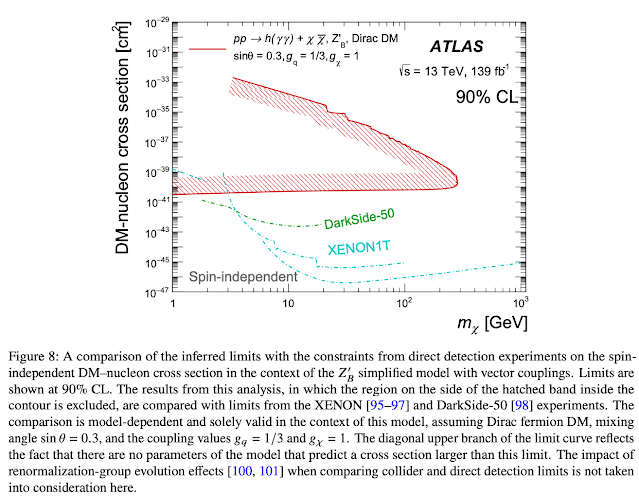 A search for dark-matter particles in events with large missing transverse momentum and a Higgs boson candidate decaying into two photons is reported. The search uses  fb of proton-proton collision data collected at  TeV with the ATLAS detector at the CERN LHC between 2015 and 2018. No significant excess of events over the Standard Model predictions is observed. The results are interpreted by extracting limits on three simplified models that include either vector or pseudoscalar mediators and predict a final state with a pair of dark-matter candidates and a Higgs boson decaying into two photons.

ATLAS Collaboration, "Search for dark matter in events with missing transverse momentum and a Higgs boson decaying into two photons in pp collisions at s√=13 TeV with the ATLAS detector" arXiv 2104.13240 (April 27, 2021).

Implications For Dark Matter Particle Searches
This study doesn't entirely rule out Higgs portal dark matter. Higgs portal dark matter could conceivably appear only in decays that don't involve photon pairs, if you twist your model to have that property. But it continues the relentless march of the LHC to rule out the existence of new particles of several TeV mass or less that could be dark matter candidates on multiple fronts.
Between the LHC and direct dark matter detection experiments, there are fewer and fewer places in the dark matter particle parameter space for a dark matter particle candidate that has any interactions whatsoever with Standard Model matter could be hiding.
Yet truly "sterile" dark matter particle candidates that interact with ordinary matter only via gravity, whether or not it has dark sector self-interactions, are very hard to square with the observed tight alignment between inferred dark matter halo distributions and ordinary matter (as previous posts at this blog have explained).
Furthermore, as previously posts at this blog have explained, dark matter candidates with more than several TeV of mass that the LHC can search for are also disfavored.
These candidates are too "cold" (i.e. these particles would have too low of a mean velocity) to fit the astronomy observations of galaxy dynamics and large scale structure if it was produced as a thermal relic (for which dark matter mean velocity and dark matter particle mass are related via a viral theorem).
But conventional lambda CDM cosmology demands a nearly constant amount of dark matter for almost the entire history of the universe (and observations place significant model independent bounds on variations in the amount of inferred dark matter in the universe), even if dark matter particles are not produced as thermal relics. So, any dark matter candidate that is not a thermal relic has to be produced in a non-thermal process in equilibrium in the current universe that would have to exist. There are really no plausible candidates for such a process that aren't ruled out observationally, however.

What Was ATLAS Looking For And Why?

By looking for missing energy (which is a typical way to search for new particles, as discussed below) in diphoton decays of Higgs bosons, the Large Hadron Collider (LHC) can search for Higgs portal dark matter, and the ATLAS Collaboration at the LHC did just that.

Thus, it could be "self-interacting dark matter" with a means of formation shortly after the Big Bang and slight interaction with baryonic matter via a virtual Higgs boson interaction, which are properties that would all be good for a particle dark matter candidate that can come close to reproducing reality to have.

Another desirable feature of Higgs portal dark matter candidates is that if they exist, they would be observable at sufficiently powerful particle colliders like the LHC.

Searches For Beyond The Standard Model "Invisible" Decay Products

The LHC has searched at the highest available energies for the production of particles that its detectors aren't able to see (e.g. because the decay products are long lived enough to exit the collider before being detected and/or not electrically charged) in a wide variety of processes.

The signal is "clean" because there are very few "background" processes that generate photon pairs. The main other Standard Model fundamental or composite particles that do are Z boson at about 91.19 GeV and the neutral pion at about 135 MeV.  The frequency and character of the Standard Model predicted decays are very well characterized and understood. Putting a floor on the energy of the photon pairs considered in one's event selection easily screens out these decays.

The Standard Model Higgs boson has a mass of about 125 GeV, all of which is translated into photon energy in its Standard Model decay into photons pairs, so focusing in on decays producing photon pairs with combined energies of 120 GeV to 130 GeV screens out all of the non-Higgs decay based background as this study did.

You believe in Dirac masses for neutrinos I think, via couplings to the known Higgs... That would be a kind of Higgs portal to the "right hand neutrino" sector, albeit it would be undetectable because of how small the yukawa couplings are?

I'm not 100% sure by what mechanism neutrino masses arise, and I am agnostic regarding the question of whether it involves the Standard Model Higgs mechanism that accounts for the masses of the other SM fundamental particles, in part, because of the Higgs portal issue you identify and in part because there is no way to experimentally confirm or deny the existence of such tiny Yukawa couplings. But, I don't think that the neutrinos are actually Majorana fermions and I don't think that it involves right handed neutrinos via a see saw mechanism.

I also think that the role of the W boson (and to a less extent other electroweak processes) in allocating the Higgs field to Standard Model fundamental particles is underestimated and not fully appreciated. I think that to escape the question begging of the Standard Model Higgs boson mechanism that replaces the question of "why are the fundamental masses what they are?" with "why are the yukawas what they are?", you need to have a process in which the W boson and Higgs (and to a lesser extent photons and Z bosons, but not gluons or gravitons) make first order contribution to the rest masses of the fundamental SM particles in some sort of joint process, with the weak coupling constant setting the overall electroweak mass scale via the Higgs vev which is a function of the weak coupling constant. A more fully elaborated combined Higgs-electroweak process for generating fundamental particle masses may mesh better with Dirac neutrinos than the SM Higgs process explanation which can be simpler due to left-right parity symmetries in the other fundamental fermions.

The ratio of the charged lepton masses and of the quark masses can be seen as arising from a dynamic balancing of different flavors via W boson interactions (with the charged leptons being the simplest because the neutrino masses are all so tiny that they induce only tiny modifications from neutrinos not existing at all). W boson transformations of heavy fermions into lighter ones pulling the heavier fermions slightly down and pulling the lighter fermions slightly up.

I like the on shell account of neutrino oscillation that I blogged about recently, as it derives the process from virtual W boson interactions, rather than the more conventional mass-weak force state mismatch approach.

While this tentative ansatz is incomplete (e.g., it doesn't explain why there are exactly three generations in the first place, and the exact equations aren't worked out, let alone the full calculations, and there are additional electroweak theory considerations the apply to the fundamental bosons), it gets you very close to what is observed in a very minimalist manner.