Connecting The Dots In The Expansion From The Steppe

Bernard's blog reviews a new paper that combined archaeological and genetic evidence in an effort to put together a more comprehensive narrative of Bell Beaker and Corded Ware expansion into Europe.
Honestly, it isn't the easiest to follow and will probably require a deeper dive to make sense of it. But it does have some nice illustrations from the paper whose abstract and citation are found at the end of this post. 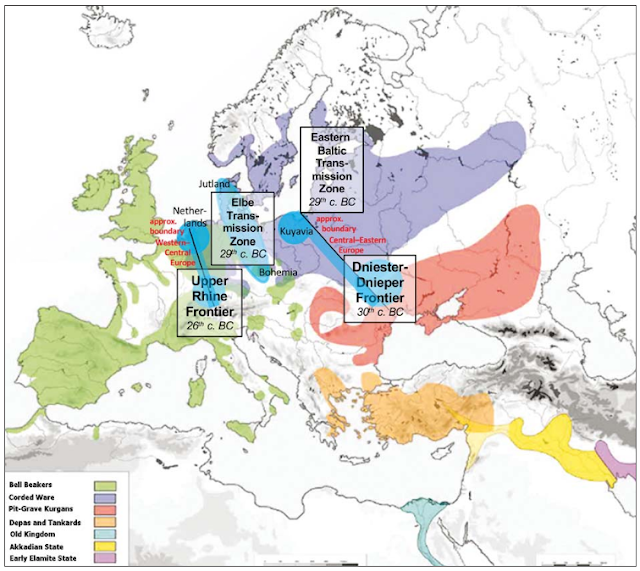 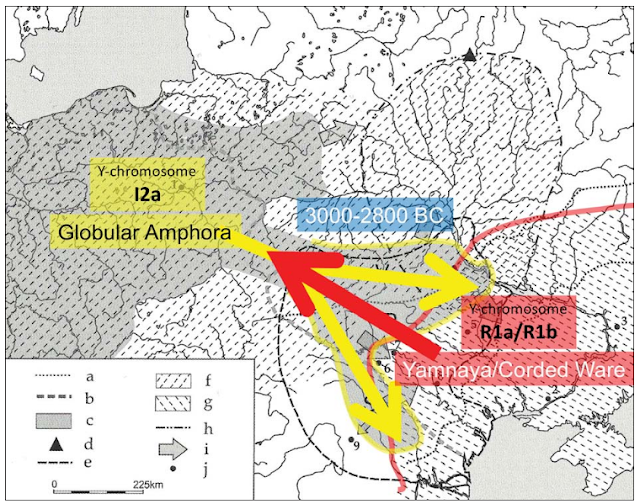 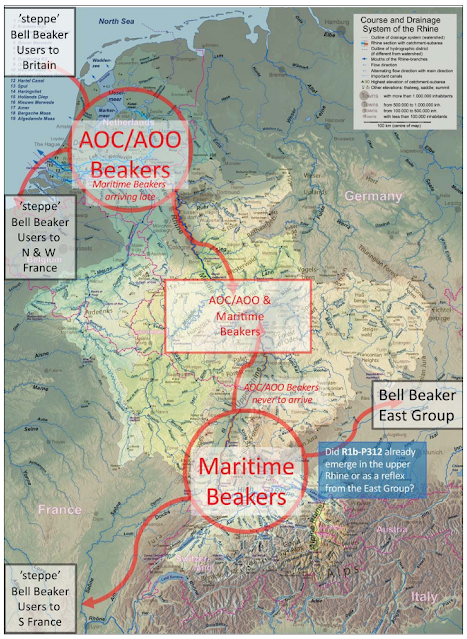 Mobility and migrations are key factors for understanding cultural change. Since the advent of mobility isotopes and especially ancient DNA studies, this fact is in no prehistoric periods so obvious as in the Early Neolithic of the 7th/6th millennium BC and the Copper Age/Early Bronze Age transition of the 4th/3rd millennium BC.

However, especially for the 3rd millennium BC, there is no consensus on the scale, size, extent, directions, and speed of events. We likewise lack good conceptualisations and explanations for the mechanisms behind people moving.

Here, an attempt is being made to describe essentials of four events in which archaeology and genetic studies regard recognisable quantities of peoples moving westwards: 1) Yamnaya; 2) Early Corded Ware; 3) Later Corded Ware; and 4) ‘steppe’ Bell Beaker.

Emphasised is the importance of the geography in the understanding of regional transmissions. Particularly discussed are the roles of versatile/volatile boundaries of the Eastern European forest-steppe region between the Dnieper and Dniester rivers for the formation of Corded Ware, and of the Central European Upper Rhine river region in the border triangle of France, Germany and Switzerland for "steppe" Bell Beaker users.

Highlighted are also possible origins of the typical gender-differentiated burial custom of Corded Ware and Bell Beaker cultures in the north-Pontic Zhivotilovka-Volchansk group; the importance of Bohemia and the Elbe river in the earliest spread and first consolidation of Corded Ware users; and the "Beakerisation" of central and southern France rather happening from the east than from the Iberian peninsula.

Read the paper, but quoting Bernard...

This is the money quote: "In summary the propagation of the steppes towards the Cordée culture between the Dniester / Dnieper zone and the Rhine, lasted only 150 years between 3050 and 2900 BC. JC., That is to say 5 to 6 generations. During this period, people adapted to a completely new environment. By comparison, Neolithic farmers took 1000 years to travel the same distance."

Managed to download the whole volume. Lots of good stuff there by all contributors to the conference.