This Galaxy Seems To Have No Apparent Dark Matter Phenomena For No Good Reason When Galaxies Like This Usually Are Usually "Dark Matter Dominated"
Galaxy AGC 114905, which is discussed in a December 2021 paper published the scientific journal MNRAS, seems to be a small "low surface brightness"/"ultra-diffuse" galaxy, isolated from any other nearby galaxies that could give rise to tidal stripping of dark matter or an "external field effect" in a modified gravity theory like MOND, that could explain why its apparent rotation curve looks like it has almost no dark matter. I previously discussed this paper in a less complete "quick hit" post at this blog.
The overwhelmingly majority of galaxies of this type, as predicted by MOND before observations were made of them in the early 1980s, have rotation curves that seems to have a particularly large proportion of dark matter to ordinary matter, in a dark matter hypothesis, and are deep in the MOND-regime of very weak gravitational fields in a modified gravity approach.
Neither dark matter theory, nor MOND, provides a ready explanation for why an outlier case like this should happen.
Stacy McGaugh, at his blog Triton Station, examines this outlier case. The chart below showing galaxies relative to the line indicating the Tully-Fischer relationship, from this blog post, illustrates how much of an outlier this result is (with AGC 114905 in orange): 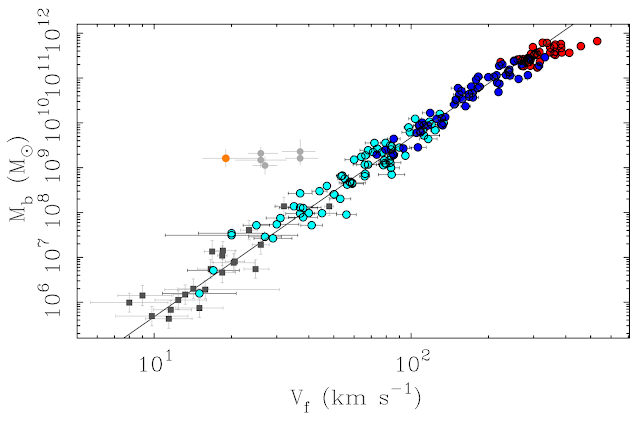 The Inclination Angle Of The Disk Is Easy To Get Wrong And Material. An Error Here Is Probably At Least A Partial Reason For This Outlier Result.
McGaugh's primary conclusion is that the factor that the paper itself identifies that the most likely source of systemic error in its estimated rotation curve identified by the authors themselves, an inaccuracy in the determination of the angle at which we are seeing the basically disk shaped galaxy with our telescopes, called the inclination angle, is the most likely culprit. He states:

The authors do the right thing and worry about the inclination, checking to see what it would take to be consistent with either LCDM or MOND, which is about i=11º in stead of the 30º indicated by the shape of the outer isophote.
they “find it unlikely that we are severely overestimating the inclination of our UDG, although this remains the largest source of uncertainty in our analysis.” I certainly agree with the latter phrase, but not the former. I think it is quite likely that they are overestimating the inclination. I wouldn’t even call it a severe overestimation; more like par for the course with this kind of object. . . .
So the bottom line is that I am not convinced that the uncertainty in the inclination is anywhere near as small as the adopted ±3º.

He places this analysis in the context of a long career of analyzing these issues in these kinds of galaxies, demonstrating first, that even modest inclination issues do indeed have a material effect, and secondly, that the magnitude of typically measurement errors in determining the correct inclination are often quite large.

Along the way, he also points to two other potential problems that are not entirely unrelated.

Is A Model Assuming A Thin Axisymmetric Disk Sound?

One is that the modeling is based upon an axisymmetric thin disk galaxy which is a spherical cow model in a case like this one with a highly irregular shape (see the image below from the 2021 paper), that doesn't  work very accurately in a galaxy like this one that is outside the model's range of applicability.

This messy morphology is typical of very low surface brightness galaxies – hence their frequent classification as Irregular galaxies. Though messier, it shares some morphological traits with the LSB galaxies shown above. The central light distribution is elongated with a major axis that is not aligned with that of the gas. The gas is raggedy as all get out. The contours are somewhat boxy; this is a hint that something hinky is going on beyond circular motion in a tilted axisymmetric disk.

Is This Galaxy Out Of Equilibrium?

Another plausible possibility that McGaugh suggests for this outlier is that it may be out of equilibrium, while models used to relate dynamical rotation curve to inferred dark matter fraction, with only rare exceptions not utilized in this case, assume that the body they are modeling is in a state of equilibrium.
The fact that AGC 114905 is currently isolated from other large galaxies makes it less likely that a near miss from a massive object took it out of equilibrium, but some kinds of objects (e.g. an intermediate sized black hole or a very dim proto-galaxy) could have an impact on the dynamics of a small galaxy, while not providing any indication that it was nearby in the time frame necessary for a fairly unstable small galaxy to come into equilibrium. This isn't the first hypothesis one would leap to, but outlier phenomena often have outlier causes.
How Important Is The Thickness Of The Disk Or The Fact That The Galaxy Is Gas-Rich?
Another point raised by McGaugh is one I also see in a new light that he does not suggest in the context of Deur's approaches. McGaugh states, continuing his discussion of the limitations of the models used that:

The modeling exercise is good, but it assumes “razor-thin axisymmetric discs.” That’s a reasonable thing to do when building such a model, but we have to bear in mind that real disks are neither. The thickness of the disk probably doesn’t matter too much for a nearly face-on case like this, but the assumption of axisymmetry is extraordinarily dubious for an Irregular galaxy. That’s how they got the name.

In the context of Deur's approach, the three dimensional shape of a mass distribution is critical to causing the gravitational effects that make the toy-model MOND theory work.

In a spherically symmetric mass distribution, a system will have no inferred dark matter and no MOND-like gravitational effects.

In an axisymmetric thin disk, he concludes that the self-interaction of the gravitational field gives rise to a MOND-like second order effect that declines as 1/r instead of 1/r^2 with radius, which becomes material when the first order 1/r^2 Newtonian term gets small in very weak gravitational fields.

As applied to this situation, what Deur's approach implies is that if AGC 114905 is a quite thick disk relative to its radius, compared to the theoretical ideal of an axisymmetric thin disk that produces MOND-like behavior, that the non-1/r^2 second order gravitational effects should be weaker, and that the dark matter proportion that one would expect to infer when trying to fit AGC 114905 into a dark matter particle model would be smaller. So, the thickness of the disk may be more important to the accuracy of the analysis than McGaugh, working from a MOND-like frame of reference, would expect. 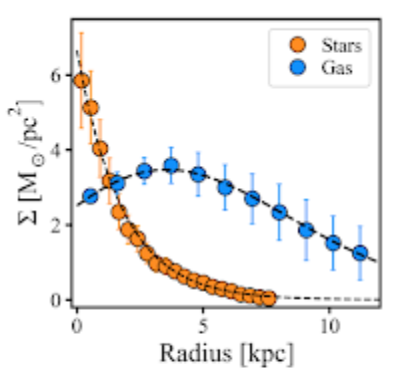 Another way that an analysis along the lines of Deur's approach could impact the result is that if AGC 114905 has a high proportion of gas and other interstellar media relative to stars, and if the interstellar medium within AGC 114905 is quite close to spherically symmetric, even if the stars are aligned in more of a disk-like arrangement, this could be a big deal.

This would reduce the inferred dark matter proportion that would be expected, since the second order gravitational effect would arise only as to the proportion of the mass in the galaxy that is in stars, rather than all of the matter in the galaxy, and it might even weaken the second order effects between the stars, effectively diluting them. This kind of scenario doesn't seem implausible in the case of this particular galaxy.

Now, the effect of the disk thickness, interstellar gas proportion, and interstellar gas distribution shape in a Deur style analysis still wouldn't be sufficient to bring AGC 114905 to the point of having no inferred dark matter proportion, that the article concludes that it has.

However thick and gas dominated it may be, and whatever the distribution of the gas in the galaxy might be, AGC 114905 still isn't actually spherically symmetric, so there should be, a priori, some inferred dark matter proportion.

But this Deur style analysis might make it possible to support a gravitational theory based explanation of AGC 114905 with a significantly smaller error in inclination angle than would be possible without this contributing factor to the analysis, allowing for a much less dramatic underestimation of the inclination angle error than would be necessary otherwise to explain this outlier case.

"...seems to be a small "low surface brightness"/"ultra-diffuse" galaxy, isolated from any other nearby galaxies that could give rise to tidal stripping of dark matter or an "external field effect" in a modified gravity theory like MOND, that could explain why its apparent rotation curve looks like it has almost no dark matter.".

This is an invalid statement. Given the galactic coordinates one observes that it is not isolated but occurs in a group, or a possible cluster, of irregular low surface brightness irregular clumps ca. 250 million light years distant, circa the generally accepted value of cosmological distance circa halfway or central to a galacatic void between galactic filaments.

FWIW, I am not making that representation on my own independent investigation. It is based on the statements made by the authors of the AGC 114905 paper in that paper.

The material question is whether it is close enough to anything else to trigger a MOND EFE or tidal stripping. I'm not in a position to independently evaluate that claim, although I do note that McGaugh does not challenge this claim and is sensitive to it.

And... there are enough galaxies out there that wildly improbably things are guaranteed to occur. Look at a million galaxies and you are very likely to find that one-in-a-million instance.

I don't think anyone has looked at a million galaxies. I was once taught that the best geologists had looked at the most rocks! I certainly looked at more pulverised rocks than most. However, I have looked at and given a cursory classification of just over 100,000 galaxies, using in part botanical and zoological nomenclature.
What is unique is that one doesn't observe highly improbable types. True, there are many highly disturbed examples, a consequence of mergers or flybys.

Most amazing is that when one looks at galaxies that have never been in causal contact according to the Big Bang scenarios, they look surprising similar in variety and pattern.

There are ca. 15 irregular clumpy low surface brightness fluffy blobs ( yes a term used by some astronomers and fluffy too) in a largish group. However distance z values are rare except for this outlier in the middle of nowhere, when compared with the astonishing number of galaxies in the filaments.

Some of my terminology favorites are jellyfish galaxies and "light dark matter".