Tensions between experiment and the Standard Model prediction regarding lepton universality violations (i.e. that all charged leptons behave identically except for differences flowing from their different masses) is the most important hint of beyond the Standard Model physics at the Large Hadron Collider (LHC). As the paper explains in the introduction, reviewing work before this presentation: 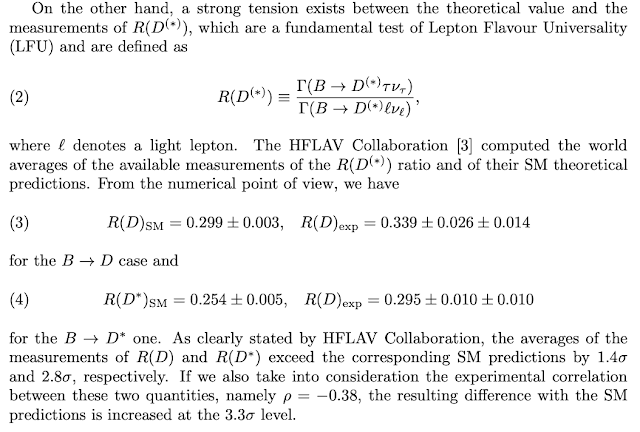 But a new analysis reported in a recent conference paper argues that the differences between tau leptons and muons is not statistically significant even in these decays. It finds a predicted R(D*) on a purely theoretical Standard Model basis to be: 0.275 ± 0.008 (about 1.3 sigma).

At this point, a natural question arises: why is the SM HFLAV theoretical average in Eq. (4) so different from the DM estimate in Eq. (19)? The answer has to be found in the shape of the FFs [ed. Form Factors].

Form factors are one of the most technical parts of quantum chromodynamics. (QCD), right on the frontier of what we understand, so its a natural place for a discrepancy to arise.

If so, the likelihood that the LHC will see no beyond the Standard Model physics surges.
This tends to favor my hypothesis that the source of the discrepancy is a separate additional source of electrons in B meson decays which isn't being screened out as expected, or isn't properly considered in the analysis, for some reason. The conclusion of the conference paper states:

We have reviewed the main properties of the Dispersion Matrix approach, which is an attractive tool to implement unitarity and LQCD calculations in the analysis of exclusive semileptonic decays of mesons and baryons. It has several interesting properties. In particular, it does not rely on any assumption about the momentum dependence of the hadronic form factors and it can be based entirely on first principles (i.e. unitarity and analiticity) and on non-perturbative inputs.

We have discussed the application of the DM method to the b → c and the b → u quark transitions and the resulting theoretical determinations of the LFU observables. In this sense, our main result is that the anomalies in semileptonic charged-current B decays have been strongly lightened. In fact, we have consistency between theory and experiment at the 1.3σ level for both R(D) and R(D∗ ), separately.

To achieve this goal, it is fundamental to avoid the mixing among theoretical calculations and experimental data to describe the shape of the FFs of interest.

The caution about mixing theoretical calculations and experimental data is also at the heart of the discrepancy between the two leading calculations of the Standard Model prediction for muon g-2, which the calculation that mixes the two strongly discrepant and in tension with experiment, and the one which is purely theoretical in much less tension with the experimental result, just as in this LFU violation comparison.
One of the strongest reasons to think that the LFU violation hints are misleading us is that many other processes with the same W boson mediated mechanism as the one believed to be at work in B meson decays and which governs these decays in the Standard Model show no sign of LFU violation to great precision.
The new conference paper and its abstract are as follows:

We present the results of the application of the unitarity-based Dispersion Matrix approach to semileptonic charged-current B decays. This method allows to achieve a non-perturbative and completely model-independent determination of the hadronic form factors. Starting from lattice results available at large values of the momentum transfer, the behaviour of the form factors in their whole kinematical range is obtained without introducing any explicit parameterization of their momentum dependence.

We will focus on the analysis of Lepton Flavour Universality by computing the τ/μ ratios of the branching fractions of the B→D(∗)ℓν and B→πℓν decays. The most important result is that, for the first time, the discrepancies between the SM expectation values and the measurements of the Lepton Flavour Universality ratios for the B→D(∗)ℓν decays are reduced at the 1.3σ level for each of the two channels, separately.

On the one hand, we have the so-called |Vcb| puzzle, i.e. the discrepancy between the inclusive and the exclusive determinations of the CKM matrix element |Vcb|. According to the FLAG Review 2021 [1], there is a ∼ 2.8σ tension between the exclusive estimate (that depends on the form factors parametrization) and the inclusive one, namely

A new more precise estimate of the inclusive value has also recently appeared [2], namely |Vcb|incl = 42.16(50), which is compatible with the inclusive FLAG value in Eq. (1).

But, this discrepancy is less notable, despite having a similar statistical significance, because it is very common for inclusive and exclusive measurements to have discrepancies in the direction observed (something that is also the case, for example, for the mean lifetime of free neutrons), and because global tests of the CKM matrix can point us to the value which is closer to the truth. 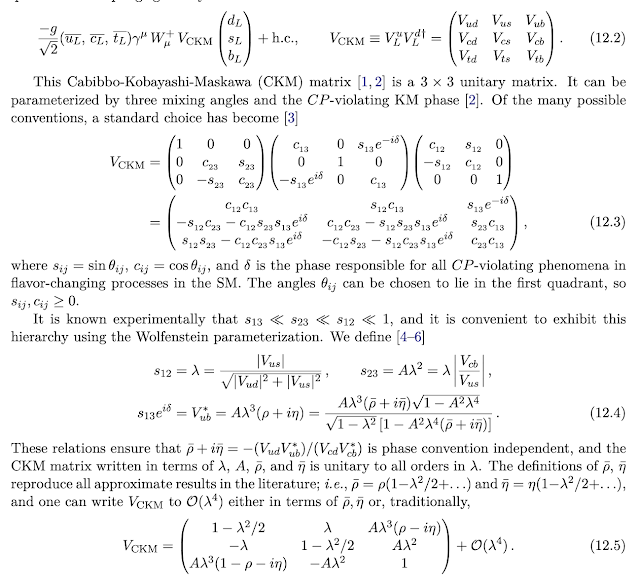 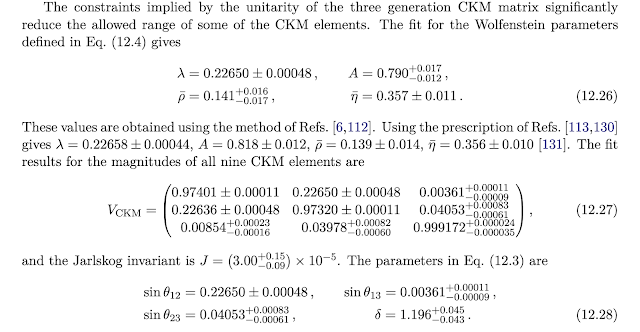