Population Replacement in Northern Asia Around The Last Glacial Maximum

The paper finds that there was complete population replacement between the pre-Last Glacial Maximum population of Northeast Asia and the modern one ancestral to the current indigenous people of the Amur region that emerged around 19,000 years ago. This population is more closely related to modern East Asians and Native Americans, than to the pre-LGM people of Northeast Asia whose ancient DNA in available.

The paper's abstract and citation are as follows:

Northern East Asia was inhabited by modern humans as early as 40 thousand years ago (ka), as demonstrated by the Tianyuan individual. Using genome-wide data obtained from 25 individuals dated to 33.6–3.4 ka from the Amur region, we show that Tianyuan-related ancestry was widespread in northern East Asia before the Last Glacial Maximum (LGM).

We also observed that EDAR V370A was likely to have been elevated to high frequency after the LGM, suggesting the possible timing for its selection. This study provides a deep look into the population dynamics of northern East Asia. 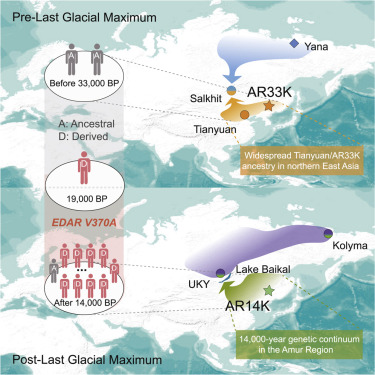 Hum, It would be interesting to know if EDAR was just a marker (like Dawkins' green hair) or if it actually had some positive value in and of itself. Cheers,
Guy

The leading hypothesis is that EDAR, primarily via its impact on breast development in women, impacts Vitamin D level in nursing children, and thereby reduces infant and child mortality, which has strong selective fitness impacts.

Another hypothesis it that is was protective against fleas and thus against plague infections (a disease that probably originated in Eastern Eurasia). https://dispatchesfromturtleisland.blogspot.com/2013/02/razib-at-gene-expression-has.html