MOND Has Predicted Early Galaxies For A Long Time

Triton Station reviews the fact that MOND has predicted very early galaxies for a long time, which the James Webb Space Telescope (JWST) is now confirming even more firmly than earlier telescopes had. This is contrary to very solid predicts of the LambdaCDM "Standard Model of Cosmology."
The "impossible early galaxy problem" isn't new, but JWST underlines even more strongly that it is not an artifact of methodological issues, now having seen a galaxy at z=13 (the bigger the z the closer a galaxy is to the Big Bang) after just a few weeks of looking for one. 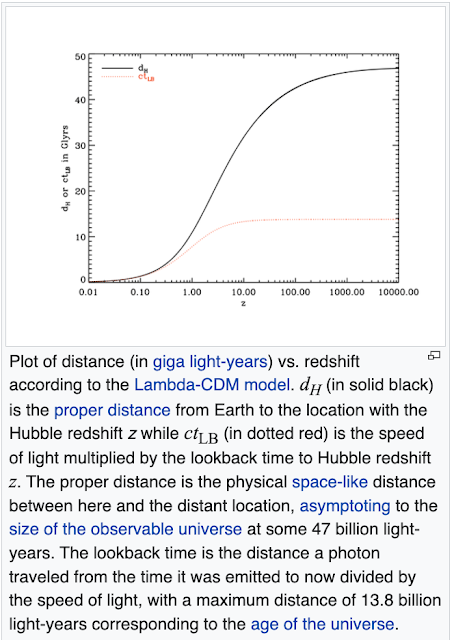 Image from Wikipedia
Indeed, as in the case of galaxy clusters, MOND makes corrections that are substantial, and in the right direction between reality and what is predicted, but not quite strong enough, even though it does much better than LambdaCDM does when it comes to galaxy formation time. This is probably for the same or similar reasons, since the environment in the Universe in which the first galaxies emerged probably was fairly similar to that of galaxy clusters in which active star and galaxy formation are going on today.
In particular, I have in mind the dimensional reduction flux tube kind of considerations raised in A. Deur, “Implications of Graviton-Graviton Interaction to Dark Matter” (May 6, 2009) (published at 676 Phys. Lett. B 21 (2009) the effectively strength the dark matter phenomena effects in galaxy clusters due to the geometry of the mass distributions.
These considerations are explored on a statistical many particle basis in Alexandre Deur, "Effect of gravitational field self-interaction on large structure formation" arXiv: 2018:04649 (July 9, 2021) (Accepted for publication in Phys. Lett. B) DOI: 10.1016/j.physletb.2021.136510; and in  A. Deur, "Effect of the field self-interaction of General Relativity on the Cosmic Microwave Background Anisotropies" arXiv:2203.02350 (March 4, 2022).

The 1998 October conference was titled “After the dark ages, when galaxies were young (the universe at 2 < z < 5).” That right there tells you what we were expecting. Redshift 5 was high – when the universe was a mere billion years old. Before that, not much going on (dark ages).
This was when the now famous SN Ia results corroborating the acceleration of the expansion rate predicted by concordance LCDM were shiny and new. Many of us already strongly suspected we needed to put the Lambda back in cosmology; the SN results sealed the deal.
One of the many lines of evidence leading to the rehabilitation of Lambda – previously anathema – was that we needed a bit more time to get observed structures to form. One wants the universe to be older than its contents, an off and on problem with globular clusters for forever. . . .
Famed simulator Carlos Frenk was there, and assured us not to worry. He had already done LCDM simulations, and knew the timing.
“There is nothing above redshift 7.” . . . 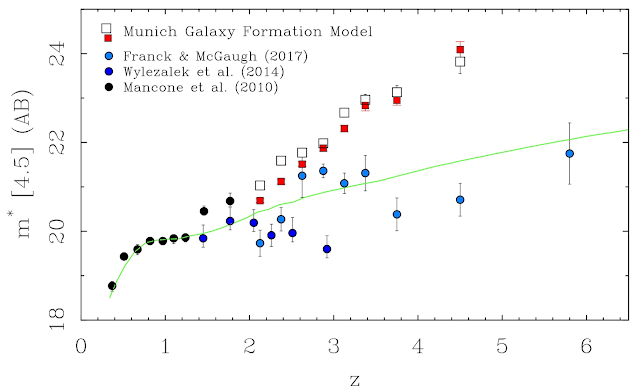 [F]igure adapted from the thesis Jay Franck wrote here 5 years ago using Spitzer data (round points). It shows the characteristic brightness (Schechter M*) of galaxies as a function of redshift. The data diverge from the LCDM prediction (squares) as redshift increases.

The divergence happens because real galaxies are brighter (more stellar mass has assembled into a single object) than predicted by the hierarchical timeline expected in LCDM.

Remarkably, the data roughly follow the green line, which is an L* galaxy magically put in place at the inconceivably high redshift of z=10. Galaxies seem to have gotten big impossibly early. This is why you see us astronomers flipping our lids at the JWST results. Can’t happen.
Except that it can, and was predicted to do so by Bob Sanders a quarter century ago: “Objects of galaxy mass are the first virialized objects to form (by z=10) and larger structure develops rapidly.”
The reason is MOND. After decoupling, the baryons find themselves bereft of radiation support and suddenly deep in the low acceleration regime. Structure grows fast and becomes nonlinear almost immediately. It’s as if there is tons more dark matter than we infer nowadays.

or the universe is older than 13.8 bya

There is some slight uncertainty in the 13.8 billion years estimate, but there are myriad reasons why it isn't significantly older.

Hum, if future observations show more discrepancies with the models, that means we're not at the end of science. Employment for my grandkids and their grandkids as well. It's not a bad thing.

Highly unlikely. EDGES, for example, and the CMB radiation, are both probing eras of the timeline of cosmology prior to galaxy formation.

"Hum, if future observations show more discrepancies with the models, that means we're not at the end of science. Employment for my grandkids and their grandkids as well. It's not a bad thing."

There will be science to do no matter what. It is just a matter of what it is studying. If we get the big questions in fundamental physics worked out, it may be more compressed matter physics, chemistry and biomedicine, although there is still lots of work to do, for example, connecting SM fundamental physics to the physics of atomic structure for which we have only heuristic and approximate explanations.

What really matters is that we not have scientists wasting vast amounts of economic resources on dead ends that are already ruled out even though collectively, scientists don't realize it yet because they aren't simultaneously considering all of the relevant experimentally constraints. A brilliant mind is a horrible thing to waste on dead end research.

Q: "What if they keep finding them ever further out?
As well as heavier elements in the ones on the edge.
Is there a point where the entire expanding universe model starts to come into question, or is that just too impossible to consider?"

A: "Crudely speaking, the age of the universe is about 6 Gyr at z= 1, 500 Myr at z = 10, and 200 Myr at z = 20. That’s about one orbit of the sun around the Milky Way. So it is hard to imagine a galaxy that big forming any sooner. Smaller things like globular clusters could, but there just isn’t much room to do things faster. On the other hand, it shouldn’t be possible for things to form at all before decoupling (z=200), so that would be too impossible to consider."