There Are No WIMPs

Weakly interacting massive particles, a dark matter hypothesis inspired by supersymmetry theories, has long ago been falsified.
The failure of direct detection experiments (in mass  ranges from 250 MeV to more than 10 TeV) shown  below is matched by lack of any signs of such particles in particle accelerators up to hundreds and thousands of GeV, and by the dynamics of inferred dark matter in galaxies. 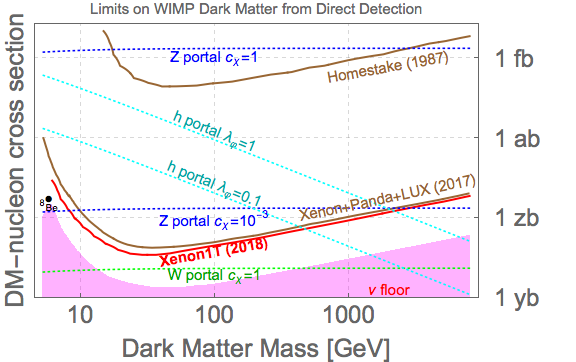 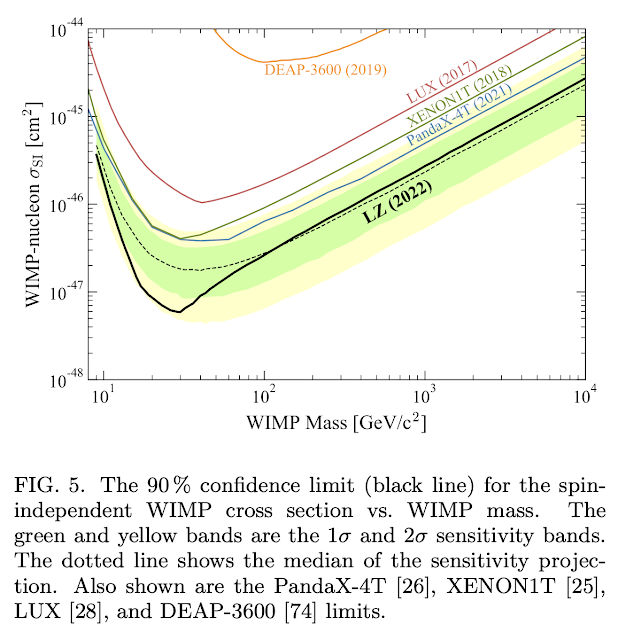 The latest experimental limits on WIMP dark matter from LZ (arXiv:2207.03764). The parameter space above the line is excluded. Note the scale on the y-axis bearing in mind that the original expectation was for a cross section around 10-39 cm2, well above the top edge of this graph.

LZ is a merger of two previous experiments compelled to grow still bigger in the never-ending search for dark matter. It contains “seven active tonnes of liquid xenon,” which is an absurd amount, being a substantial fraction of the entire terrestrial supply. It all has to be super-cooled to near absolute zero and filtered of all contaminants that might include naturally radioactive isotopes that might mimic the sought-after signal of dark matter scattering off of xenon nuclei. It is a technological tour de force.

The technology is really fantastic. The experimentalists have accomplished amazing things in building these detectors. They have accomplished the target sensitivity, and then some. If WIMPs existed, they should have found them by now.
WIMPs have not been discovered. As the experiments have improved, the theorists have been obliged to repeatedly move the goalposts. The original (1980s) expectation for the interaction cross-section was 10^-39 cm^2. That was quickly excluded, but more careful (1990s) calculation suggested perhaps more like 10^-42 cm^2. This was also excluded experimentally. By the late 2000s, the “prediction” had migrated to 10^-46 cm^2. This has also now been excluded, so the goalposts have been moved to 10^-48 cm^2. This migration has been driven entirely by the data; there is nothing miraculous about a WIMP with this cross section.

There Are No WIMPs

if lx has a detection what could it be

We'll see when and if it happens. Previous false alarms like Xenon1T were probably due to background interactions that the experiment failed to rule out.

A WIMP in the strict sense, interacts via the weak force (implying a fm cross-section of interaction of 10^-39, and has a mass scale of roughly 0.1 GeV to 10,000 GeV at the greatest extremes. Certainly, this is true for supersymmetric WIMP candidates. There is no more room for them in the data.

We can't give up yet! There are still NIMPs (neutrino interacting massive particles).

Never seen the acronym NIPS before.

It's my coinage, meant to be mildly humorous. You're right, it has been obvious for a while that weak interaction limits were excluding WIMPs, and about all that's left for dark matter are tiny stable black holes and particles that only couple to neutrinos. The difficulties with finding limits on neutrino interactions are obvious. You can do back of the envelope calculations with SN1987A neutrinos and models of dark matter distributions, but it isn't very limiting. Scattering of ultra-high energy neutrinos might say something, but getting statistics is going to take quite a while, and it needs an awful lot of modeling work.

Almost all of the parameter space for particles that interact via the weak force has been ruled out. Almost all of the PBH parameter space has been ruled out (arguably all of it), and so has all of MACHO parameter space. Collisionlesss DM that interacts only via gravity is pretty much ruled out (because there is too tight a correlation with baryonic matter). Almost by definition, DM doesn't interact via the strong or EM forces. High energy neutrinos as DM were ruled out long ago. Creatively for new DM candidates in seemingly inexhaustible, but the collective literature paints a very grim picture for DM particle theories taken collectively.