In the late Bronze Age, specifically during a time period called Late Minoan IIIB from about 1350 BCE to 1100 BCE, around the time of "Bronze Age collapse" (from roughly 1200 BCE to 1150 BCE), the non-Indo-European Minoan civilization on the island of Crete, which used a Linear A script (presumably to record Minoan language content), was replaced by the Mycenaean Greek (linguistically Indo-European) population that started to use the Linear B script (which is believed to have used the same symbols to phonetically record Mycenaean Greek content) and left distinctive Mycenaean artifacts and architecture. An earlier study also found a person with steppe autosomal DNA absent in earlier Minoans in the same necropolis that produced "newcomer" results in this study.

Unsurprisingly, a new study looking at remains from Crete from the appropriate era, found mostly human and animals remains of local origins with typical Minoan mtDNA. But, four remains from around the time of the transition at the same necropolis, all with the same mtDNA (of a haplogroup also found in Minoans), showed non-local origins based upon non-genetic chemical indicators, and a fifth grave in the same complex (from which no chemical samples of remains could be retrieved) had Linear B writing. A few animal remains at that location in that time frame also had non-local origins.

The non-local origins were found at a Late Minoan IIB era necropolis at location "3" on the map below: 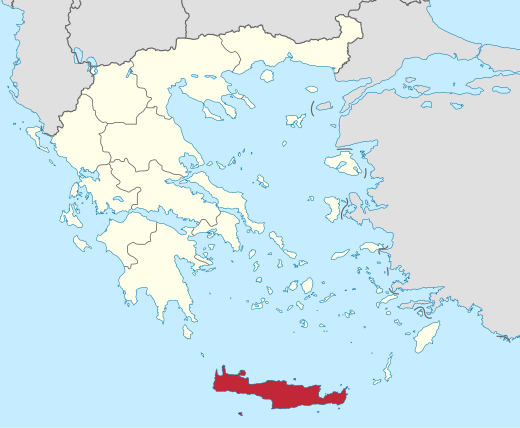 This is, of course, exactly what you would expect. It confirms the paradigmatic narrative of this transition with chemical evidence from human and animals remains. On the other hand, the study, which did not include ancient DNA other than mtDNA (despite mentioning a single prior autosomal DNA sample from a previous paper), does not really resolve any of the outstanding seriously controversial questions about the nature of that transition that it poses in its own introductory material.

The purely local origins of all other remains fits the paradigm of stasis during the Minoan era itself (following another clear cut transition from the Neolithic era to the Minoan era, starting around 3500 BCE. The Neolithic (i.e. farmer and herder) culture on Crete dates to about 6000 BCE.

The timing of the Minoan-Mycenaean transition also further confirms that Minoan civilization survived the eruption of the Thera volcano on what is now the island of Santorini (which took place in 1628 BCE give or take a year or two) through its population continuity after that date.

Some highlights from the introduction and discussion portions of the paper state:

Archaeological research of the Neolithic and Bronze Age periods on Crete has a long history, starting in the 19th century, and remains a vibrant research area today. It is likely that Crete was first substantially settled in the Neolithic period, with Neolithic levels (especially Late Neolithic) being found at palace sites such as Knossos, where the earliest Neolithic levels have recently been radiocarbon dated. There has been substantial research on the Late Neolithic-Early Bronze Age transition in Crete, especially in looking for the origins of what would be a unique later Bronze Age (Minoan) material culture, including the first use of a novel pottery firing technology.
The site of Knossos has a long sequence of occupation levels, spanning the early (aceramic) Neolithic, final Neolithic and Early, Middle and Late Bronze Age. The separation into different time periods at the site by Arthur Evans led to the widely use terminology for the chronological sequences on Crete, specifically the use of the term ‘Minoan’ for the Bronze Age levels which is divided into Early, Middle and Late Minoan periods, largely based on pottery typologies. An alternative terminology focusses more on the sequences of the formation and abandonment of the palace sites on Crete and is termed the pre-,proto-,neo- and post-palatial periods. Here, we generally follow the site chronologies used by the site excavators, which use the Evans ‘Minoan’ terminology.
The later Bronze Age, usually labelled the Late Minoan period (corresponding to the final Neopalatial and Postpalatial periods) is an area of particularly intensive study and interest. One of the long-standing areas of interest in Bronze Age Cretan Minoan studies is the end of the period, where many sites were abandoned, and the archaeological record changes to include archaeological material culture and architecture stylistically similar to forms used on the Greek mainland, where the Late Bronze Age is commonly termed ‘Mycenaean’. This is also the period where there is the appearance of Linear B script in Crete, which was widely used in mainland Greece in the Mycenaean period, and the end of the use of the (still untranslated) Linear A writing common in Minoan sites on Crete. The end of the Minoan period is also characterised by the abandonment of palace sites, which often have a ‘destruction layer’ coinciding with the end of the use of these sites. The search for causal factors leading to the end of the Minoan period have been discussed at length since the early days of archaeological studies in Crete. There is an argument that there was a natural disaster, such as an earthquake or volcano, that coincided with this time period, while others have argued that Crete (and the surrounding region) was perhaps violently invaded at this time by external invaders, including the so-called ‘sea peoples’. There is also the discussion that the island of Crete was settled by Myceneans from the mainland, also perhaps violently, or as new settlers arriving in a perhaps de-populated Crete.
In this paper we sought to explore evidence of mobility in Crete, with an emphasis on sites dating to the Late Minoan periods using biomolecular methods (isotope and DNA analysis). Our study employed a range of isotopic measurements (carbon, nitrogen, strontium, sulphur) of humans and animals from Neolithic and Bronze Age sites across Crete. The isotopic measurements on animals were to establish local baselines for the different regions of the island, and the human isotope values were compared with the local baseline isotope values to see if they were consistent with them living their lives in Crete, and local to the site and region where they were buried. Any humans that had isotope values that were markedly different from the baseline (faunal) values were considered to be ‘non-local’ and most likely from mainland Greece or the Eastern Mediterranean. Mitochondrial DNA was also sequenced from eight individuals and their sequences were compared to larger scale-studies of the region to look for evidence of possible movements of people between Crete and surrounding regions. . . .
The biomolecular evidence presented here strongly points to little movement of people between Crete and the surrounding regions during the Neolithic and Bronze Age periods. However, at the end of the Bronze Age, in the postpalatial Late Minoan period (LMIII) we found four individuals with non-local isotope values suggesting they may have originated from outside of Crete and were then buried in the Late Minoan cemetery of Armenoi.
The site of Armenoi dates to the Late Minoan IIIB (LMIIIB) period and contains over 230 burial features. It has been excavated by Y. Tzedakis over a period of more than 40 years, first starting in 1969 and has many rock-cut burial features (chamber tombs) of different sizes. Some of the larger tombs contained grave goods including pottery and burials in large free-standing ceramic larnakes. Many of the other tombs also contained pottery, and some of the smaller ones had no grave goods at all. These chamber tombs usually contained either multiple or single burials. Most of the pottery dates to the LMIIIB period, and there is the remarkable find of a pottery vessel (stirrup jar) from tomb 146 (which has DNA results presented in this paper, but we were unable to measure isotope values of humans from this tomb) that is inscribed with Linear B script (the inscription is ‘wi-na-jo’).

The Linear B writing script was not in use in Early or Middle Bronze Age Crete (which instead used Linear A script), but it was in widespread use at Late Bronze age Mycenaean sites on the Greek mainland. Therefore, Armenoi (and some of the palace sites, such as Knossos, where this new Linear B script is the main script used on tablets in the Late Bronze Age) may have been settled by people from the mainland who used this Mycenaean script or may have been imported from the mainland through trade or other contacts and was then locally adopted as the main script.
It is possible then that the four individuals with ‘non-local’ sulphur isotope values (two of these individuals also had higher strontium isotope values than the marine strontium value and our bioavailable faunal baseline average value) were new Mycenaean settlers or traders (especially the two individuals with both strontium and sulphur outlier values) from the mainland that settled at or near to Armenoi and the existing cemetery was used for burials of these newcomers.
While the mtDNA sequences do not offer conclusive evidence for the origins of the studied individuals, previously published nuclear DNA data from Armenoi specimen 503 showed that this individual was genetically distinct from preceding Cretans, and in her genetic profile more similar to contemporaneous Myceneans from the mainland in that she also harbored ancestry derived from Bronze Age steppe pastoralists that Minoans pre-LMIII lacked.

We undertook a large-scale study of Neolithic and Bronze Age human mobility on Crete using biomolecular methods (isotope analysis, DNA), with a particular focus on sites dating to the Late Bronze Age (‘Late Minoan’) period. We measured the strontium and sulphur isotope values of animal remains from archaeological sites around the island of Crete to determine the local baseline values. We then measured the strontium and sulphur values of humans from Late Neolithic and Bronze Age sites.

Our results indicate that most of the humans have sulphur and strontium isotope values consistent with being local to Crete, showing no evidence for a wide-scale movement of people from the Greek mainland or other areas away from Crete in these time periods.

However, we found four individuals from the late Bronze Age (Late Minoan III) cemetery of Armenoi with sulphur isotope values not typically found in Crete and are instead consistent with an origin elsewhere. This cemetery at Armenoi also has one of only a few examples of the newly adopted Mycenaean Linear B script on Crete found outside of the palace sites, pointing to an influence (trade and possible migration) from the mainland, which may then be the place of origin of these four individuals.

DNA (mtDNA) studies of eight Late Bronze Age individuals from Armenoi have results consistent with people living in Aegean region at this time and cannot be used to distinguish between individuals from Crete (‘Minoans’) and the Greek mainland [‘Mycenaeans’]).