For all but the least massive beyond the Standard Model particles that couple to the Higgs boson, those changes could be quite significant for one or more of the eight Higgs boson decay channels, while we have not detected other Higgs boson decays that we shouldn't be able to see yet with the Large Hadron Collider (LHC).

Previous results of searches for expected Higgs boson decays (with the Standard Model predicted values show as percentage branching fractions) are as follows:

A Higgs boson can also decay to s-quark pairs, d-quark pairs, and u-quark pairs at (small) frequencies not shown above. A Standard Model Higgs boson also has a top quark coupling (which has been seen) and a self-coupling, both of which are inferred from interactions other than  Higgs boson decays.

The gluon pair decays, while common, are hard to observe because the many kinds of hadrons produced by gluon pairs that, in turn, decay further before being observed by detectors, are hard to distinguish from background signals from other processes.

Further limits are placed upon deviations from the Standard Model 125 GeV Higgs boson decays by the non-detection of decays into particles whose predicted branching fractions are too small for us to have been able to detect yet with current experiments, effectively placing an experimental upper bound on those branching fractions. 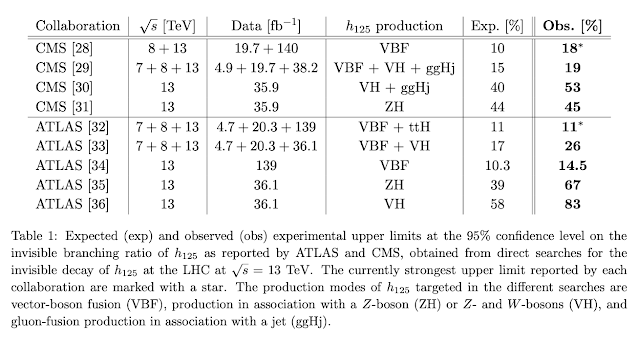 A stable or metastable beyond the Standard Model fundamental particle with zero electromagnetic or strong force color charge or weak force couplings that couples with the Higgs boson to get its mass just like Standard Model particles do, is the simplest version of Higgs portal dark matter.

I've argued for years that these indirect limits are more stringent than direct limits in many cases on the available parameter space of Higgs portal dark matter and other beyond the Standard Model particles that couple to the Higgs boson, giving rise to "invisible" Higgs boson decays.

The Conclusions Of The New Paper

Now, researchers have finally examined this line of reasoning in light of the currently detected and quantified Higgs boson decays. Their results have been very fruitful. In the case of a Standard Model Higgs boson with a mass of 125 GeV they conclude that:

Their bottom line conclusion regarding Higgs portal dark matter in a scenario where Higgs bosons couple to dark matter particles proportionate to the rest mass of those particles, as it does with all Standard Model particles, is that:

we show that in light of the new results from the LZ collaboration a fermionic DM candidate within the simplest Higgs-portal scenario is completely ruled out.

More verbosely, the paper explains that:

Higgs portal dark matter. We considered dark matter candidates (scalar, fermion and vector) coupled to the Higgs boson via a single operator and computed the relic abundance and direct detection cross section in terms of the dimensionless Higgs-portal coupling parameter for each case.

Direct detection experiments tightly constrain the parameter space suitable to achieve the measured relic abundance, leaving for the bosonic candidates only the mass region at the Higgs-boson resonance, i.e. if the DM mass is O(mh125/2).

We showed that new results from the LZ collaboration completely rule out the fermionic DM candidate within the simplest Higgs-portal scenario.

Around the resonance, if we relax the hypothesis of the DM candidates to account for all the dark matter, the indirect constraints resulting from the cross-section measurements of h125 derived using HiggsSignal are the strongest bounds in the narrow range of DM masses that is not excluded by direct detection experiments.

The basis for this conclusion is summarized in the following chart: 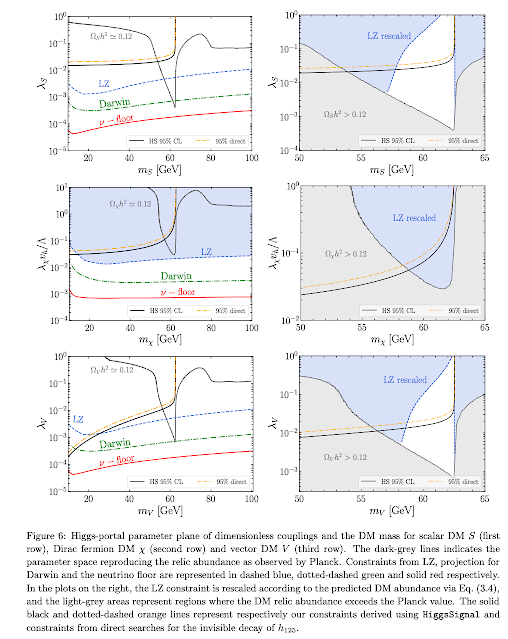 Of course, these boundaries will tighten as the uncertainties in the measurements of the eight Standard Model branching fractions of the Higgs boson already observed get smaller, which is something that is expected with further analysis of completed second LHC run data and analysis of data from the third LHC run currently being conducted.

A New Unsolved Problem In Physics: The Source Of Fermionic DM Mass

In  addition to ruling out a major hypothetical kind of dark matter (including essentially all supersymmetric dark matter candidates, which were also ruled out by other means from W and Z boson decays, and direct detection experiments), this also gives rise to a new unsolved problem in physics.

The Standard Model explains the source of mass for all known particles through a combination of the Higgs mechanism, for fundamental Standard Model particles other than neutrinos, and quantum chromodynamics (QCD) for composite particles bound by the strong force. But, now, in addition to the unsolved question of where the neutrino mass comes from, we have a new unsolved problem, which is:

If dark matter consists of massive fermionic particles, by what means do these particles obtain their mass?

Furthermore, this also poses a serious problem for cosmology models in which Higgs field inflation is the primary main means by which fundamental particles come into being after the Big Bang.

We investigate the impact of interactions between hidden sectors and the discovered Higgs boson h125, allowing for additional invisible decay channels of h125. We perform χ2-fits to the measurements of the Higgs-boson cross sections as a function of the invisible branching ratio and different combinations of coupling modifiers, where the latter quantify modifications of the couplings of h125 compared to the predictions of the Standard Model.

We present generic results in terms of exclusion limits on the coupling modifiers and the invisible branching ratio of h125. Additionally, we apply our results to a variety of concrete model realizations containing a hidden sector: dark matter within Higgs- and singlet-portal scenarios, models featuring (pseudo) Nambu-Goldstone bosons and two Higgs doublet extensions.

One of the main conclusions of our work is that in a wide class of models the indirect constraints resulting from the measurements of the cross sections of h125 provide substantially stronger constraints on the invisible Higgs-boson branching ratio compared to the direct limits obtained from searches for the invisible decay of h125. However, we demonstrate that the presence of an invisible decay mode of h125 can also open up parameter space regions which otherwise would be excluded as a result of the indirect constraints. As a byproduct of our analysis, we show that in light of the new results from the LZ collaboration a fermionic DM candidate within the simplest Higgs-portal scenario is completely ruled out.

what of 100 tev collider at cern

bad idea. Lots of money when we don't have a good enough physics justification for it.

what about 28 tev he-lhc